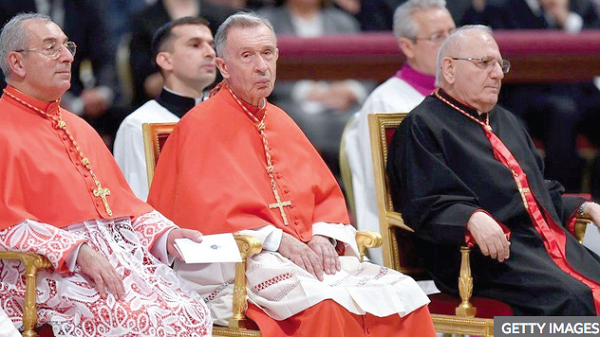 Cardinal Luis Ladaria (left) of the Congregation for the Doctrine of the Faith signed the response
30.5k Shares

The Catholic Church does not have the power to bless same-sex unions, the Vatican office responsible for doctrine has said.

It is "impossible" for God to "bless sin", the Congregation for the Doctrine of the Faith (CDF) said yesterday.

But the CDF did note the "positive elements" in same-sex relationships.

In October, Pope Francis said in a documentary that he thought same-sex couples should be allowed to have "civil unions".

Pope Francis indicates support for same-sex civil unions, in the Catholic Church, a blessing is given by a priest or other minister in the name of the Church.

In 2013, Pope Francis famously broke with doctrinal tradition, saying "Who am I to judge gay people?"

Yesterday, Pope Francis approved the response by the CDF, saying it was "not intended to be a form of unjust discrimination but rather a reminder of the truth of the liturgical rite".

Some parishes in recent months, including in Germany and the US, have started giving blessings to people in same-sex relationships as a way to welcome gay Catholics to the church, the Reuters news agency reported.

The CDF's response was in answer to the question posed to it: "Does the church have the power to give the blessing to unions of persons of the same sex?". It replied: "Negative".

The CDF noted that marriage between a man and a woman was sacrament and, therefore, blessings cannot be extended to same-sex couples.

"For this reason, it is not licit to impart a blessing on relationships, or partnerships, even stable, that involve sexual activity outside of marriage (i.e., outside the indissoluble union of a man and a woman open in itself to the transmission of life), as is the case of the unions between persons of the same sex," it said.

The Vatican later attempted to clarify the comments saying they were taken out of context and did not indicate support for same-sex marriage.