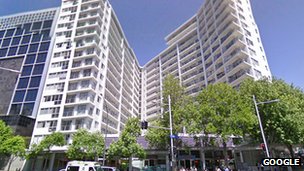 A British man has survived a fall from the 15th floor of a building in New Zealand, local media report.

Tom Stilwell fell from his neighbour's balcony in his apartment block in Auckland at 02:00 local time on Sunday (14:00 GMT on Saturday), reports said.

He was trying to lower himself onto his balcony, which was directly below his neighbour's, when he fell, police said.

His friends said that he had bone fractures and internal injuries, but was "fine" and "a very lucky man".

He was awake and laughing on Monday, but had no recollection of what happened, his friends told New Zealand newsgroup Fairfax Media.

"He looks alright," his flatmate, Beth Goodwin, said. "It's more internal injuries. He's broken some bones in his ribs and neck but they're not important bones."

In a statement, New Zealand police said: "It appears that the man was locked out of his 14th floor apartment. He fell while attempting to climb down the outside of

the building from a 15th floor apartment directly above his, in an effort to gain access via his balcony."

There were "no suspicious circumstances surrounding the fall", the statement added.

The 20-year-old is said to be in New Zealand on a working holiday.

Mr Stilwell discovered he was locked out of his flat early on Sunday, and asked a neighbour if he could climb down from her balcony into his flat, his friends said.

The neighbour, Geraldine Bautista, told the New Zealand Herald that Mr Stilwell was "a little tipsy" but polite.

"I wasn't scared of him - he just requested 'Can you please let me jump off from the balcony? I will not bother you, just let me use your balcony.'"

"I never thought he would really do that. In my mind I thought 'Okay, I'll just let you see that it's really impossible. I didn't think he'd jump, because it's really scary."

However, he quickly pulled himself over the balcony railing before she could stop him, she said.

"I thought I was dreaming... it happened within seconds," she said. "I couldn't even scream for help."

Mr Stilwell's fall was broken by the roof of an adjacent building, reportedly some 13 floors below.

He was taken to hospital in a critical condition, but was in a satisfactory condition by Monday, a hospital spokesperson said.

Dr Tony Smith, a medical director at St John, an emergency healthcare organisation, told the New Zealand Herald that a person's chances of survival were increased if they were able to break their fall on something.

However, "survival from falls of that height are extraordinarily unusual", he said.

In December 2007, New York window cleaner Alcides Moreno plummeted 47 floors when cables holding the platform he and his brother were working on failed. His brother died but Mr Moreno made a full recovery, something doctors attributed in part to his escaping major head injuries.

In June 2010 a four-year-old boy escaped with minor injuries after falling from the 17th floor of a hotel in Miami. Joey Williams, who bounced off palm trees as he fell to the 10th-floor pool area, was sitting up in bed by the next day.