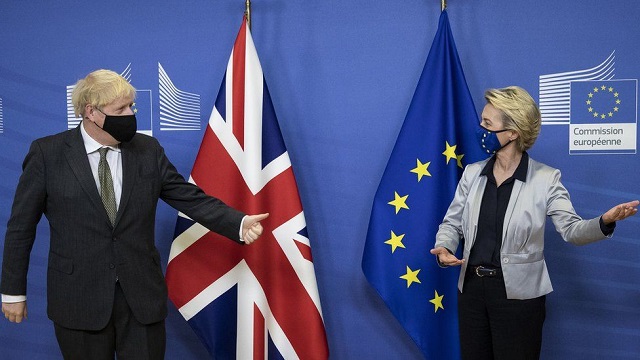 Talks between the UK's chief negotiator Lord Frost and the EU's Michel Barnier will resume in Brussels later.

But Foreign Secretary Dominic Raab said it was "unlikely" the negotiations would be extended beyond Sunday.

After their meeting, the prime minister and European Commission president "agreed that by Sunday a firm decision should be taken about the future of the talks", a No 10 spokesperson added.

The BBC's Laura Kuenssberg said the evening had "plainly gone badly" and the chances of the UK leaving the post-Brexit transition period at the end of the year without a firm arrangement was a "big step closer".

Time is running out to reach a deal before 31 December, when the UK stops following EU trading rules.

Major disagreements remain on fishing rights, business competition rules and how a deal will be policed.

The dinner was seen as a last-ditch opportunity to work through the main sticking points and for the two sides to try and find some common ground.

In a statement, the UK side said there had been "a frank discussion about the significant obstacles which remain in the negotiations".

"Very large gaps remain between the two sides and it is still unclear whether these can be bridged," a No 10 spokesperson said.

They said the two sides had agreed to further discussions over the next few days, and the PM did "not want to leave any route to a possible deal untested".

Mrs von der Leyen said the discussions had been "lively and interesting", and the two sides fully "understand each other's positions" but they "remain far apart".

"We will come to a decision by the end of the weekend," she said.

Before then, on Saturday, Mr Johnson will be a co-host of the online Climate Ambition Summit with UN Secretary-General Antonio Guterres.

Speaking to the BBC, Mr Raab said: "I think we are rapidly approaching the point where we need some finality."

Asked if talks would go beyond Sunday, he said it was "unlikely" but added "never quite say never when you are negotiating with the EU".

Responding to a warning from the Tesco chair that food prices could rise were a deal not to be agreed, Mr Raab acknowledged there could be "some bumps along the road" but said he was "not concerned about either supermarket cupboards running bare or food prices".

The Confederation of British Industry said the cost of no deal was "significant".

Its director-general, Tony Danker, told BBC Radio 4's Today programme: "The difference between a deal and no deal is incredibly real in GDP [gross domestic product] terms, it's incredibly real for businesses - particularly in certain sectors - so we have to be in 'getting to yes' mode."

Labour's deputy leader, Angela Rayner, said the prime minister had "completely failed" to deliver the "oven-ready" deal he had promised at the last election.

"The failure to deliver the deal he promised is his and his alone," she said.

Earlier this week, Mr Johnson said the oven-ready deal he was referring to was the withdrawal agreement, or divorce deal, rather than a trade deal.

SNP's Westminster leader Ian Blackford tweeted: "A no deal would be a massive failure of diplomacy and leadership which Boris Johnson has to take ownership of."

Meanwhile, Tory Brexiteer MP John Baron said the PM deserved praise for "standing firm" rather than compromising in a rush to agree a deal. "We must remember a trade deal is for keeps, not just for Christmas," he said.

"We all want a deal, but it has to be a good deal because as we've said many times before, no deal is better than a bad deal."

Speaking before he left for Brussels, Mr Johnson said the EU was insisting on terms "no prime minister could accept" in relation to access to UK fishing waters and retaliatory measures if the UK diverged from EU standards.

Any deal also has to be ratified by the European Parliament and win the backing of MPs at Westminster.

The House of Commons could sit as late as Christmas Eve should it be required to look at a Brexit deal, Speaker Sir Lindsay Hoyle said.

Under current plans, the Commons will stop sitting on 21 December, but he told Sky News the recess could be delayed.