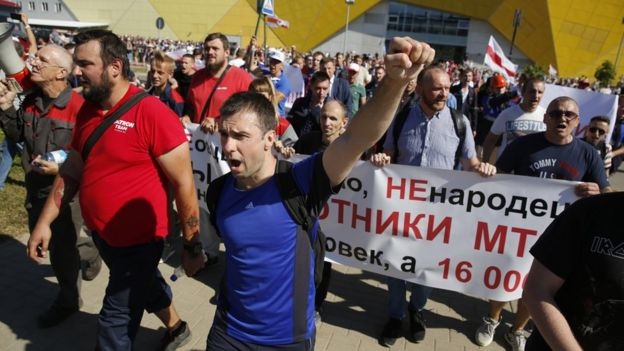 Belarusian President Alexander Lukashenko has been heckled by workers on a visit to a factory as anger mounts over his disputed re-election.

Workers chanted "leave" and booed the long-time leader of the ex-Soviet state as he insisted he would not allow a new vote after allegations of ballot fraud.

Strike action spread to state TV, with staff walking out on Monday.

Opposition candidate Svetlana Tikhanovskaya has suggested she could act as an interim leader.

Police violence towards opposition supporters, as well as the alleged poll-rigging in the 9 August vote, fuelled a big protest rally in the capital Minsk on Sunday.

Mr Lukashenko has led Belarus since 1994, maintaining close relations with neighbouring Russia, on which Belarus heavily relies for energy supplies.

How great is the pressure on Lukashenko?
According to local, independent news site Tut.by, Sunday's opposition rally in Minsk was "the largest in the history of independent Belarus".

A wave of anger has been rising since the Central Election Commission said Mr Lukashenko had won 80.1% of the vote and Ms Tikhanovskaya - 10.12%.

Hundreds of protesters have been wounded and two have died in clashes with police over the past week. Some 6,700 people have been arrested, and many have spoken of torture at the hands of security forces.

On a visit to a Minsk tractor plant on Monday, Mr Lukashenko sought to defend his disputed victory, telling workers: "We held the election. Until you kill me, there will be no other election."

However he said he was willing to hold a referendum and "hand over my authority in accordance with the constitution - but not under pressure and not via street protests".

As Mr Lukashenko spoke at the factory, workers booed him and chanted "leave".

Also on Monday, the Minsk Philharmonic held a singing protest.

Last week, workers at state-run factories walked out in solidarity with the protesters, and more strikes are planned for this week, increasing the pressure on Mr Lukashenko.

At state TV, staff walked out in protest against censorship and the election results.

Ms Tikhanovskaya, who left for Lithuania after denouncing the results, insists that where votes were properly counted, she won support ranging from 60% to 70%.

In a video message released on Monday, she said she was ready to become a "national leader" in order to restore calm and normality, freeing political prisoners and preparing for new elections.

How did Sunday's rallies play out?
Rival rallies were held in the capital, with the opposition event appearing to attract much higher numbers.

There were reports of state sector workers being forced to attend Mr Lukashenko's rally or face the threat of losing their jobs.

As the president spoke, the anti-Lukashenko protesters gathered for a peaceful rally near a war memorial in the centre of Minsk.

A number of officials, as well as current and former police officers, have resigned.

The Belarusian ambassador to Slovakia, Igor Leshchenya, declared his solidarity with the protesters. He told the BBC: "I represent Belarus and the Belarusian people, which according to our constitution is the only source of power."

The UK said on Monday it did not accept the results of the "fraudulent" election.

"The world has watched with horror at the violence used by the Belarusian authorities," said Foreign Secretary Dominic Raab.

Also on Monday, US President Donald Trump said his administration was following the "terrible situation" in Belarus closely.

In a conversation on Sunday, the two men discussed "the situation in Belarus, taking into consideration the pressure the republic was being put under from outside", the Kremlin said.