Aukus pact: France and US seek to mend rift 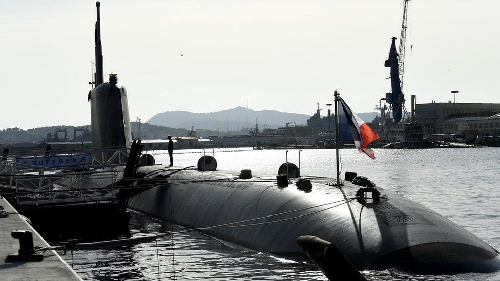 As a result of Aukus, France will no longer be selling submarines to Australia

France and the US have made efforts to end a row which started last week with the announcement of a defence pact between the US, UK and Australia.

The Aukus pact cost France a submarine contract worth billions of dollars.

In a 30-minute phone call on Wednesday, the French and US presidents agreed to try to find a way forward.

The US acknowledged that the situation would have benefited from "open consultations", and France agreed to send its ambassador back to Washington.

In a carefully worded joint statement, the two governments said US President Joe Biden and French President Emmanuel Macron would "open a process of in-depth consultations, aimed at creating the conditions for ensuring confidence".

The two leaders are set to meet in Europe at the end of next month.

What is Aukus? It's a security pact between Australia, the US and UK. It allows for greater sharing of intelligence, but crucially it gives Australia secret technology to build nuclear-powered submarines, though not equipped with nuclear weapons

What's the aim? Aukus is widely seen as a response to the growing power of China, and an effort to counter its influence in the contested South China Sea

Why has it angered France? Australia cancelled a $37bn (£27bn) deal with a French company building diesel-powered submarines, and, what's more, France - a traditional Western ally - found out about the new pact only a few hours before the public announcement

Analysts have described Aukus as probably the most significant security arrangement between the three nations since World War Two.

But the pact angered the French government, with Foreign Minister Jean-Yves Le Drian describing it as a "stab in the back".

France considers the Asia-Pacific region to be of key strategic and economic importance, with 1.65 million French citizens on islands including La Réunion, New Caledonia, Mayotte and French Polynesia.

France recalled its ambassadors to Washington and Canberra for consultations in protest over the Aukus deal.

In the statement on Wednesday, Mr Biden reaffirmed the importance of French and European engagement in the Asia-Pacific region

The BBC's Washington correspondent Nomia Iqbal described Wednesday's statement as a non-apology from the Americans: an apology to the French for the lack of consultation, but not for the policy itself (Aukus).

US Secretary of State Anthony Blinken and Mr Le Drian are expected to hold a bilateral meeting on Thursday on the sidelines of the UN General Assembly in New York, according to a US official.

Meanwhile, UK Prime Minister Boris Johnson said he and the other Aukus leaders were a "bit taken aback by the strength of the French reaction" and said it was time for "some of our dearest friends" to "prenez un grip".