At least 28 killed in Quetta bombing 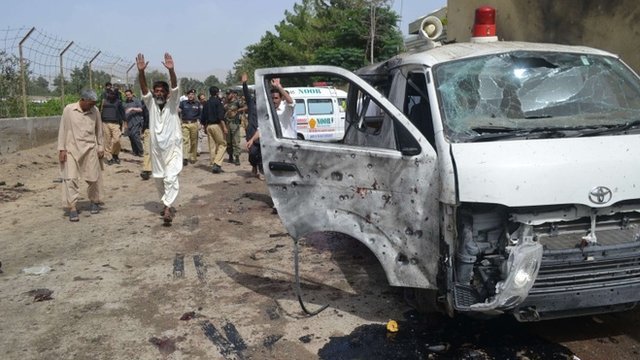 A suicide bombing at a funeral for a policeman in south-western Pakistan has killed at least 28 people including a senior police officer, police say.

They say that the blast in Quetta, capital of Balochistan, also wounded at least 50 people.

Quetta police chief Mir Zubair Mehmood told the AP news agency that the bomber detonated his explosives just before the funeral service was about to start.

No-one has claimed responsibility for the attack.

However suspicion is likely to fall on the Taliban who have in the past carried out numerous suicide bombings in Balochistan.

The province is plagued not just by the Taliban's insurgency, but also by sectarian in-fighting between Sunnis and Shias and a rebellion by Baloch separatists.

Correspondents say the latest bombing marks the culmination of a bloody Ramadan in Pakistan, with more than 90 people killed in at least 11 attacks during the month.

Deputy Inspector General of police Fayaz Sumbal, one of the most senior officers in Quetta, was among those killed, police say. 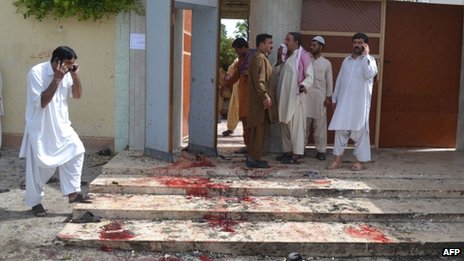 They told the AP news agency that Mr Sumbal spotted the suicide bomber before he detonated his explosives and asked police officers quickly to search him. As officers began to question the bomber, he blew himself up.

The BBC's Charles Haviland in Islamabad say that heavy security in Quetta, believed to be the hiding place of Afghan Taliban leader Mullah Omar, was not enough to prevent the bomber from striking.

The incident was captured live by some television channels which were covering the funeral. Most of those killed and wounded were policemen.

The funeral was for a policeman who was shot and killed as he travelled through Quetta earlier on Thursday with his children, who were both injured.

Witness said that in the immediate aftermath of the attack weeping policemen wandered among the blood and body parts, looking for colleagues or sat, shocked and in silence, amid abandoned shoes and other belongings.

Policeman Mohammad Hafiz told the AFP news agency of his horror after the bomber - wearing a jacket packed with ball bearings and shrapnel - detonated his device.

"I was inside the mosque and we were lining up for the funeral prayers when a big blast took place," he said.

"I came out and saw injured and dead bodies lying on the ground.

"I have no words to explain what I've seen. It was horrible."