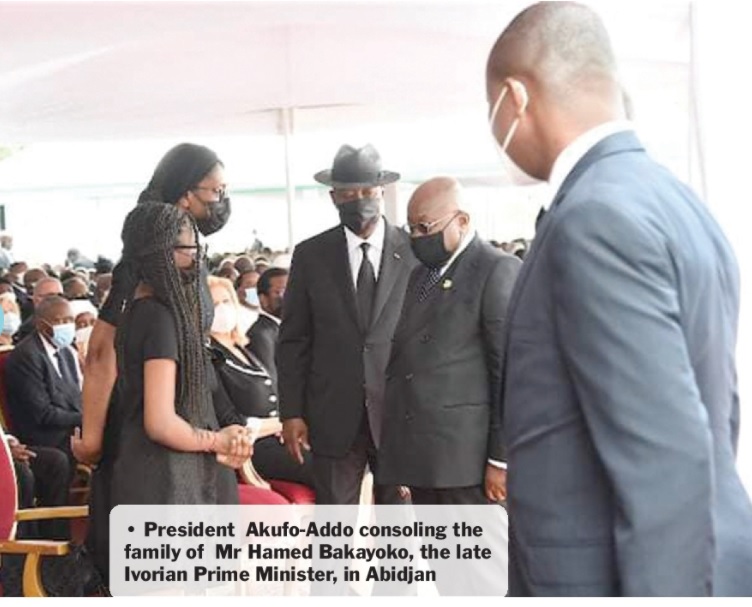 President Alassane Ouattara and his wife, members of the bereaved family, political party representatives and ambassadors of different countries attended the funeral.

The Presidency issued a statement last Tuesday to inform the public that the President had left the country to Cote d'Ivoire to attend the funeral of Mr Bakayoko.

The statement said President Akufo-Addo was attending the funeral in his capacity as Chairman of ECOWAS.

Last Wednesday's funeral was part of eight days of national mourning for the late Prime Minister.

The burial was scheduled for Friday.

President Akufo-Addo was accompanied by the Minister of Foreign Affairs and Regional Integration, Ms Shirley Ayorkor Botchwey and officials of the Presidency and the Foreign Ministry.

Mr Bakayoko died in a hospital in Germany on March 10, 2021, where he was receiving treatment for cancer.

He passed away just days after his 56th birthday..

He was appointed Prime Minister in July, following the sudden death of his predecessor Amadou Gon Coulibaly.

President Ouattara described Mr Bakayoko as a “great statesman, an example to young people and a man of exemplary loyalty”.

Mr Bakayoko was flown to France in February for medical tests and was later transferred to Germany due to his deteriorating health.