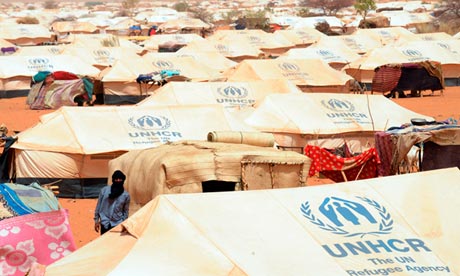 More people are refugees or internally displaced than at any time since 1994, with the crisis in Syria having emerged as a major new factor in global displacement.
UNHCR's annual Global Trends report, released on Wednesday, covers displacement that occurred during 2012 based on data from governments, NGO partners, and the UN refugee agency itself. The report shows that as of the end of 2012, more than 45.2 million people were in situations of displacement compared to 42.5 million at the end of 2011.

This includes 15.4 million refugees, 937,000 asylum seekers, and 28.8 million people forced to flee within the borders of their own countries. The report does not include the rise in those forced from their homes in Syria during the current year.

War remains the dominant cause. A full 55 percent of all refugees listed in UNHCR's report come from just five war-affected countries: Afghanistan, Somalia, Iraq, Syria and Sudan. The report also charts major new displacement from Mali, in the Democratic Republic of the Congo, and from Sudan into South Sudan and Ethiopia.

"These truly are alarming numbers. They reflect individual suffering on a huge scale and they reflect the difficulties of the international community in preventing conflicts and promoting timely solutions for them," said António Guterres, UN High Commissioner for Refugees and head of UNHCR.

Also evident is a continuing gap between richer and poorer countries in hosting refugees. Of 10.5 million refugees under UNHCR's mandate -- a further 4.9 million Palestinian refugees fall under the mandate of its sister-agency, the UN Relief and Works Agency), half are hosted by countries that have a per capita GDP of less than US$5,000. In all, developing countries host 81 percent of the world's refugees compared to 70 percent a decade ago.

UNHCR works to help people who are forcibly displaced, including through aid and immediate practical help, and by finding solutions to their plight. The year 2012 saw an end to displacement for 2.7 million people, including 526,000 refugees and 2.1 million internally displaced people. Among those for whom solutions were found are 74,800 people submitted by UNHCR for resettlement in third countries.

Last year saw little change from 2011 in the rankings of the world's major refugee hosting countries. Pakistan continued to host more refugees than any other nation (1.6 million), followed by Iran (868,200) and Germany (589,700).

Afghanistan remained the world's top producer of refugees, a position it has held for 32 years. On average, one out of every four refugees worldwide is Afghan, with 95 percent located in Pakistan or Iran. Somalia, another protracted conflict, was the world's second largest refugee-producing nation during 2012, however there the rate of refugee outflow slowed. Iraqis were the third largest refugee group (746,700 persons), followed by Syrians (471,400).

With people displaced inside their own countries, the figure of 28.8 million for 2012 is the highest level in more than two decades. This includes 17.7 million who are being helped by the UN refugee agency. UNHCR assistance to IDPs is not automatic but occurs at the request of governments. Significant new internal displacement was seen in the Democratic Republic of Congo and Syria.