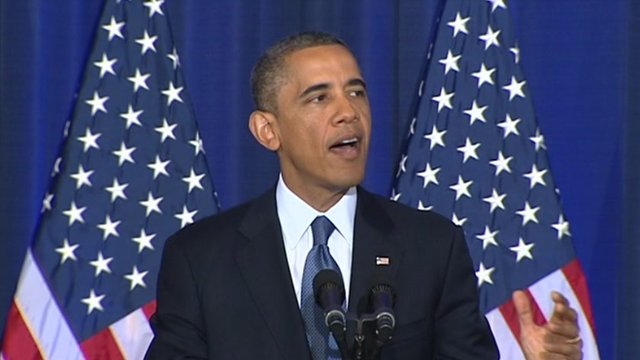 President Barack Obama has defended the use of drones in a "just war" of self-defence against deadly militants and a campaign that had made America safer.
In a wide-ranging speech on a programme shrouded in secrecy, he said there must be "near certainty" that no civilians would die in such strikes.

In a renewed push to shut Guantanamo Bay, he said he had lifted a moratorium on prisoner transfers to Yemen.

Mr Obama also defended the use of drones to kill four US citizens.

"We are at war with an organisation that right now would kill as many Americans as they could if we did not stop them first," he said in Thursday's address at the National Defense University in Washington DC.

"So this is a just war - a war waged proportionally, in last resort, and in self-defence."

He added: "And yet as our fight enters a new phase, America's legitimate claim of self-defence cannot be the end of the discussion. To say a military tactic is legal, or even effective, is not to say it is wise or moral in every instance."

Declaring America at a "crossroads" in its efforts to combat militancy, Mr Obama also said his administration would be willing to accept increased oversight of drone strikes outside war zones like Afghanistan.

Human rights groups have long condemned the use of unmanned drones to carry out killings.

Mr Obama warned that a "perpetual" US war on terror, whether through drone strikes, special forces operations or troop deployments, would be "self-defeating".

As the president addressed efforts to close the detention centre at the US base in Guantanamo Bay, Cuba, he was interrupted by a protester shouting about the current hunger strike at the prison.

"I'm willing to cut the young lady who interrupted me some slack because it's worth being passionate about," he said.

Mr Obama told his audience: "Guantanamo has become a symbol around the world for an America that flouts the rule of law."

Calling on Congress not to block his efforts to transfer the facility's inmates to American high-security jails, the Democratic president added: "No person has ever escaped from one of our super-max or military prisons in the United States."

Mr Obama also said he would lift a moratorium on prisoner transfers to Yemen, called on US lawmakers to shut down the prison entirely.

The speech coincides with the signing of new "presidential policy guidance" on when drone strikes can be used, the White House said.

The policy document curtails the circumstances in which drones can be used in places that are not overt war zones, such as Pakistan, Yemen and Somalia.

In an outline of the new policy released to the news media, the administration said it preferred to capture terrorist suspects, with drone strikes used only amid a "continuing, imminent threat" to the US.

Beyond that, the administration listed criteria for the approval of a drone strike:

On Wednesday, the US disclosed that four Americans had been killed in drone strikes in Yemen and Pakistan since 2011, marking the first formal public acknowledgement of the US citizen deaths in drone strikes.

In a letter to the Senate judiciary committee, US Attorney General Eric Holder defended the targeted killing in 2011 of Anwar al-Awlaki, whom he described as a "senior operational leader" of al-Qaeda in the Arabian Peninsula.

Awlaki, who was born in the US state of New Mexico, was killed in a missile strike from an unmanned plane in Yemen in September 2011 along with Samir Khan, a naturalised US citizen who produced an online al-Qaeda magazine.

Mr Holder also confirmed Jude Kenan Mohammad, a North Carolina resident, had been killed in a drone strike. He is thought to have died in a strike in November 2011 in Pakistan's South Waziristan region.