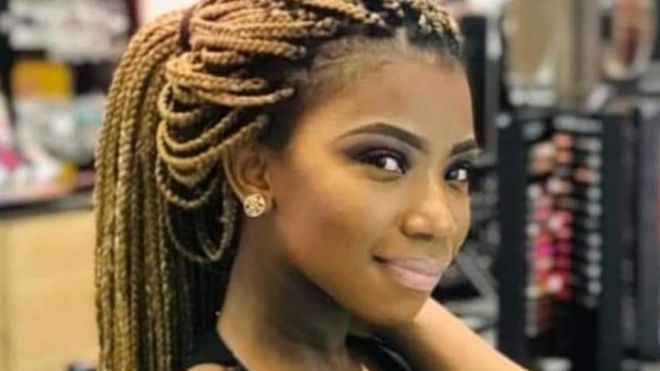 South African police have arrested a 31-year-old man for the murder of a woman whose stabbed body was found hanging from a tree last week, triggering a national outcry.

The man is currently in court but has not yet commented on the charges.

After her death, South African President Cyril Ramaphosa said the culture of silence around gender-based violence had to end.

Ms Pule went missing on 4 June and four days later a member of the public found her body in the Johannesburg suburb of Roodepoort.

She was hanging from a tree and had been stabbed through the chest.

There was a wave of outrage in South Africa after her death and the hashtag #JusticeForTshego trended on Twitter.

The past few days have been difficult for the women of South Africa.

At a time when the nation's focus has been on containing the spread of coronavirus, the gruesome murders of women like Tshegofatso Pule have been a harsh reminder of the daily violence women face here.

President Cyril Ramaphosa has described gender-based violence as the shame of the nation.

His government has in the last few months channelled more resources towards the fight.

Some of the extra funding has gone towards training the police, some towards special sexual offences courts.

But advocates say there should be more focus placed on prevention and, for that, attitudes towards women need to change.

That is something that will need more than hashtags and protests, it needs men to be part of the solution, they say.