Ethiopia’s conflict, threat to security in Horn of Africa 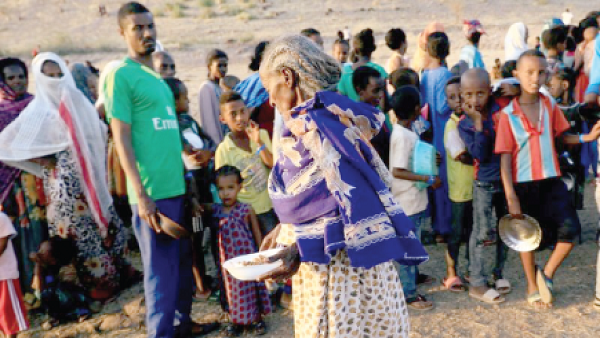 When Abiy Ahmed became Ethiopia’s Prime Minister in 2018, the country was full of promises and excitement for a better future. But this year, hope has turned to horror as headlines of ethnic violence and war have superseded those of peacemaking.

The conflict in northern Ethiopia has already lasted two weeks, and it threatens to destabilise the entire Horn of Africa.

Located in Africa’s horn on its east coast, the landlocked nation of Ethiopia is the second most populous nation in Africa. It holds about 115 million people with an annual growth rate of 2.6 per cent. This culturally diverse region is home to over 80 ethnic groups of multiple origins, including Cushitic and Afro-Asiatic.

The conflict in Ethiopia, Africa’s second most populous nation, has therefore become a bloody battlefield where hundreds of people have been killed on both sides.

The raging war, rooted in long-standing tension between powerful regional party, the Tigray People's Liberation Front (TPLF) and Ethiopia's central government, has raised fears of destabilisation in the Horn of Africa.

Already, the unrest has forced more than 30,000 people to flee their homes for neighbouring Sudan, a move many have described as jumping from the frying pan to the fire as Sudan itself has been battling its own crisis.

Months of steadily increasing tensions between the federal government and the rulers of the northern Tigray region exploded into open warfare, and in the early hours of November 4, 2020, the government announced a military operation against the TPLF, accusing it of committing treason by attacking a federal army base and commandeering weapons.

The TPLF has dominated Ethiopia's military and politics for decades before Abiy Ahmed became the Prime Minister in 2018 and pushed through some major reforms in order to stabilise the democracy he wanted to deepen in the country.

In November 2019, the Nobel Peace Laurette, Prime Minister Abiy Ahmed, and the Ethiopian People's Revolutionary Democratic Front Chairman formed a coalition and unified the constituent parties of the coalition into a new Prosperity Party, but the TPLF, who was in the minority, viewed this merger as illegal and did not participate in it.

From the start of January 2020, the TPLF was involved in activities that have been condemned by the central government, and in September 2020, the TPLF asked the National Election Board of Ethiopia to help Tigray set up regional elections, after Prime Minister Abiy Ahmed had cancelled the elections in June due to the COVID-19 pandemic.

After that request was denied, the TPLF worked with opposition parties in Tigray to set up its own election board to oversee its regional elections which were open to international observers, with 2.7 million people participating in it.

Thereafter Prime Minister Ahmed called the election illegal and stated publicly that the federal government would not recognise the results of the election as Tigray had defied a nationwide ban on all polls imposed because of the COVID-19 pandemic.

For its part, Tigray's administration sees Mr Abiy's reforms after he took office as an attempt to hand his central government more power and weaken regional states while they also resent what they called the Prime Minister's "unprincipled" friendship with Eritrean President Isaias Afwerki.

When Ethiopian Prime Minister Abiy Ahmed postponed a national election due to the coronavirus in June, tension escalated between the two groups. The TPLF sees the central government as illegitimate, arguing Mr Abiy no longer has a mandate to lead the country.

Ethnic Tigrayans make up about six per cent of Ethiopia’s estimated 115 million population, but for nearly 30 years played an outsized role in Ethiopia’s military, economy and civil service.

The battle-hardened TPLF had played a leading role in a long-running military campaign that in 1991 overthrew the Marxist government of Mengistu Haile Mariam and then went on to become the dominant force in the country’s governing coalition.

That changed in 2018 when Abiy Ahmed came to power after mass anti-government protests. Since then, Tigray leaders have complained that they have been unfairly targeted, marginalised and blamed for the country’s ills.

The federal government says its operations are aimed at restoring “order” and “target primarily the disgruntled, reactionary and rogue members of the TPLF clique”. But hundreds of people have been reported killed so far in the conflict, with tens of thousands forced from their homes and both sides accused of committing atrocities against civilians.

With internet and telephone lines largely down, and journalists barred from visiting the region, independent verification of the situation on the ground has been difficult.

Meanwhile as the war rages on, government forces had seized the towns of Shire and Axum, advancing on the Tigrayan capital Mekelle after a three-day deadline given by Prime Minister Abiy to Tigray's forces to surrender expired on Tuesday.

The TPLF leader, Debretsion Gebremichael, has confirmed to a local TV station that his soldiers had lost control of the towns in the south and west of Tigray. But he said their victory was temporary and he vowed to defeat Mr Abiy's forces.

As fighting raged on Wednesday, Mr Gebremichael said his forces were inflicting "heavy defeats on all fronts against the forces that came to attack us". He called on all Tigrayans including children to mobilise and join the "struggle".

Ethiopian officials accused the TPLF of destroying four bridges close to the Tigray capital Mekelle, but the group denied the claims.

1. The Kingdom of Aksum was centred in the region. Described as one of the greatest civilisations of the ancient world, it was once the most powerful state between the Roman and Persian empires.

2. The ruins of the city of Aksum are a UN World Heritage Site. The site, dating from between the 1st and 13th Century AD, features obelisks, castles, royal tombs and a church which is believed by some to house the Ark of the Covenant.

3. Most people in Tigray are Ethiopian Orthodox Christians. The region's Christian roots stretch back 1,600 years.

4. The region's main language is Tigrinya, a Semitic dialect with at least seven million speakers worldwide.

5. Sesame is a major cash crop, exported to the US, China and other countries.