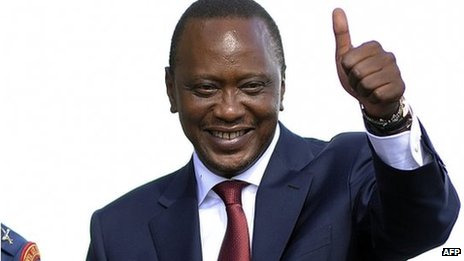 The African Union (AU) has accused the International Criminal Court (ICC) of "hunting" Africans because of their race.

It was opposed to the ICC trying Kenya's President Uhuru Kenyatta on charges of crimes against humanity, said Ethiopia's Prime Minister Hailemariam Desalegn.

The AU would raise its concerns with the UN, he added.

Mr Kenyatta is due to be tried in July on charges of crimes against humanity.

He denies the charges, which arise from accusations that he fuelled violence after disputed elections in 2007.

He was elected president in March, after defeating then-Prime Minister Raila Odinga in a tightly contested poll.

Speaking at the end of an AU summit in Ethiopia's capital, Addis Ababa, Mr Hailemariam said African leaders had expressed that out of those indicted by the ICC "99% are Africans".

"This shows something is flawed within the system if the ICC," he said.

The ICC had been formed to end the culture of impunity, but "now the process has degenerated into some kind of race hunting", Mr Hailemariam said.

It was "chasing" Mr Kenyatta and his deputy William Ruto, despite the fact that the rival Kalenjin and Kikuyu ethnic groups - who had fought after the 2007 election - had come together to vote for them in the March poll, he added.

Mr Kenyatta and Mr Ruto were on opposite sides in the 2007 election, after which some 1,000 people were killed and 600,000 people fled their homes.

Analysts say the ICC prosecutions bolstered their campaign in the 2013 poll, as they presented it as foreign interference in Kenya's domestic affairs.