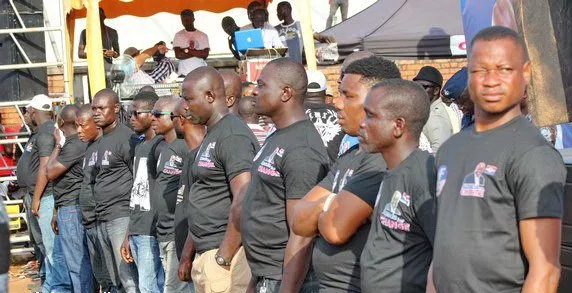 Life is a series of adjustments; you can make changes along the way, but if you do not start moving forward, you will never get anywhere.
— K. L. Simmons.

Quite naturally and justifiably, many well-meaning Ghanaians are disgusted about the fines imposed on the members of the Delta Force, a foot-soldiering group associated with the New Patriotic Party (NPP), whose members took the law into their own hands in Kumasi and physically assaulted a public officer who they thought did not merit an appointment and further caused mayhem at a Kumasi Circuit Court where they escaped from lawful custody.

The fine may appear not deterrent enough in the face of the brazen effrontery with which they carried out their criminal activities. But the fact that they were sent to court, charged, tried and sentenced to the fines make them ex-convicts.

Situate that against the situation in December 2008, during the general election when some bandits attacked some polling stations in Akwatia and carried away ballot boxes. A number of the bandits were apprehended and put on trial. They were remanded and detained in police custody. There were arguments and counter-arguments as to which political party they supported. But leaders of a particular party were always seen in the precincts of where the deviants were detained to cater for their welfare.

As soon as the new government took office in January 2009, the case was brought to an end. That was the last time anybody heard about the trial of the bastards. They were freed unconditionally and which party they supported was no longer a mystery. Many such dysfunctional incidents could be recounted both from the Volta and Brong Ahafo regions, under the National Democratic Congress (NDC) and NPP administrations respectively, where public property, including vehicles belonging to district assemblies, were vandalised because foot soldiers of the parties disagreed with nominations for appointment to district chief executive positions.

While these are inglorious chapters in our political history, measuring the extent to which governments are prepared to acquiesce over misguided, violent and fanatical conduct of their party supporters, the trial of the Delta Force miscreants marks a watershed that at least we are beginning to awaken to our obligation to protect and defend the Constitution by being impartial and enforcing the provision that none is above the law.

It is in that spirit that I may want to suggest that we take it in good faith just as the sages have said that half a loaf is better than no bread. However, what we should worry about are the new threats that are issued daily and the brazen attack on some ministers of state, as if they do not matter and could be attacked with impunity. It is even more bothersome that the police seem not to be concerned about such developments but take delight in some useless technicalities.

The Minister for Gender, Children and Social Protection, Ms Afisa Otiko Djaba, seems to have come under baseless attacks and threats from a group of unruly youth in the Tamale area who have on countless times threatened to undermine and disrupt the School Feeding Programme in the area because they allegedly claim that she did not follow what they consider to be their preferred path in the selection of providers of the service. They accuse the minister of ethnic bias and nepotism in the selection of coordinators merely because their preferred persons were not appointed.

It is unfortunate that the police have not arrested the conspirators and are claiming that they have no knowledge of the threat. These are some of the areas that we must be concerned about. It has become imperative that we work to uproot the lawlessness and impunity of ‘so-called’ party fanatics who take the law into their hands because they have political godfathers who would come to their rescue and protect them from any liability despite their acts of bestiality.

The tendency where public officials are blackmailed or prevented from discharging their responsibilities for which we would hold them accountable by ordinary citizens parading as foot soldiers must be stopped and dealt with firmly and decisively. It is such unpunished acts that encourage others closer to power to pawn positions and proffer phantom services for which innocent but greedy individuals sometimes suffer from irreparably.

The time has come for all of us to fight collectively to eliminate the incidence of unnecessary and irrational interference in the performance of public duty by people who do not have the mandate of anybody but who assume self-importance because they are party supporters whose party is in government.

We must resist impunity and lawlessness. We have pampered some deviants for far too long in the name of partisan politics. Violence in the name of political party support is evil and must be fought fearlessly. For as Dr Martin Luther King maintains, “An injustice anywhere is a threat to justice everywhere.”