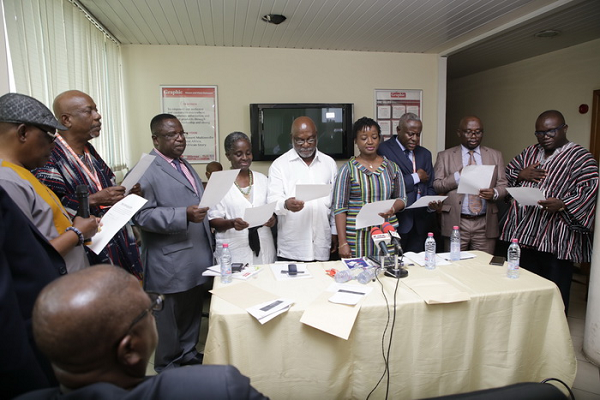 Board members of the Graphic Communications Group Limited Follow @Graphicgh

My association with the Graphic Communications Group Limited as a permanent staff member will end this year. I have since the beginning of the year attempted to give account of some of the developments I have gone through serving as a journalist with the company.

In 1992, we overwhelmingly decided to return to multi-party constitutional democracy. Political parties were formed and as a state-owned media organisation, we demonstrated our readiness to promote pluralism. We resolved to discharge our obligation in line with provisions of Article 55(11) that “The State shall provide fair opportunity to all political parties to present their programmes to the public by ensuring equal access to the state-owned media,“ as well as Article 163, that “All state-owned media shall afford fair opportunities and facilities for the presentation of divergent views and dissenting opinions.”

In living by our determination to be transparent and accessible to all political parties, we encountered the wrath of the board of directors chaired by a High Court judge, Mr Justice J.K.  Ebiassah.  We had carried stories on both the National Democratic Congress (NDC) and the New Patriotic Party (NPP). The NDC story was on the front page, but not the lead, the NPP story was the lead on page three. Quite naturally, the headline of the NPP story was bigger than that of the NDC. To our surprise, the board, which included a veteran Editor, Mr Kwame Gyawu Kyem, summoned an emergency meeting for us to explain why the headline of the NPP story was bigger than the NDC story.

Subsequently, the board decided to transfer some of us. As a news editor, I called on the regional editors to sample public opinion on the decision of the board. The stories were carried in the Daily Graphic. We intended carrying stories from all the 10 regions. After stories from four regions had been published, the board withdrew the transfers. Their angst was directed to me as the news editor. To cloud it, six sectional editors were promoted to Deputy Editors, a move that was not only resisted by the beneficiaries but which angered the workers’ union which considered the promotions as biased and unfair to other departments.

The board called for an emergency meeting at which it was explained to them design concepts and page planning. We were anguished because Mr Gyewu Kyem, as a former Editor of the Ghanaian Times, could have explained to them why the NPP story on page three had a bigger headline type than the NDC story on the front page, since any story on the front page carried  more weight and importance than stories on any other page of the newspaper.

The board then made policy changes and directed that all positions from sectional editors and above must be occupied by staff who had served in the regions for a period of three years. Although I was the butt of the policy, when it was concluded, I evaded all the requirements because I had served in the Ashanti and Northern regions for the maximum three years demanded.  Moreover, the board realised that I was the only one with a degree in English Language and they counselled me to put my knowledge to the service of the company so that we avoid slippages in language use. The policy affected the Features Editor, Mr Kweku Baku, who was transferred to Takoradi and subsequently resigned from the company.

When the tenure of the board elapsed, it was easy for us to repudiate the promotions and be restored to our former positions. But management capitalised on the board’s action and moved me as the news editor to become the literary editor and later editor of a non-existent Ghana Year Book while Mr Lee Accorley was appointed as Editor of the Graphic Showbiz.

Every effort was made to sideline me in the Newsroom and no one cared whether I reported for duty or otherwise. There were approaches by the management of the Chronicle to lure me to leave Graphic and come to work with them but I resisted. I, however, found an avenue to make better use of my time by travelling with the Institute of Economic Affairs (IEA) as it organised series of programmes on democratic governance, which helped to broaden my knowledge base to the extent that I served as a member of the first Blue Ribbon Committee of the IEA.