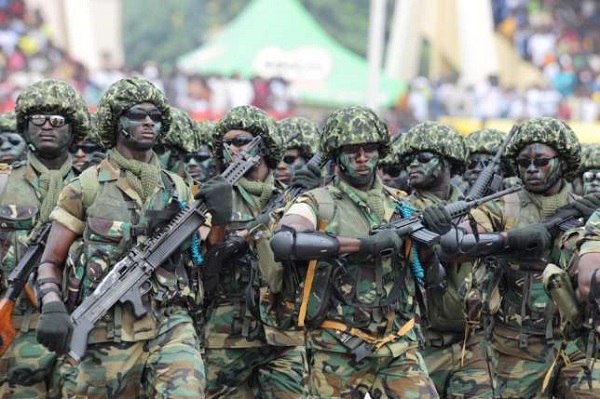 But the lies of those possessed by Agwu are lies that do not harm anyone. They float on top of a story like the white bubbling at the pot-mouth of new palm-wine. The true juice of the tree lies coiled up inside, waiting to strike… CHINUA ACHEBE.

Last week, I ended on the note that the soldiers fumed. That was in the era of the Provisional National Defence Council (PNDC). The soldiers fumed for two reasons. The week before, some Forestry Commission staff who were attending the funeral of their colleague were embarrassed when the military stopped their bus and ordered the occupants to come out because the bus did not have a pass. In an article, I condemned the action of the soldiers.

Secondly, one of them cocked his gun and I told him that he could shoot me and report himself to the police for committing murder but not to run away into the bush. His colleagues asked him to keep the gun away.

When the driver went to the office to bring the pass, the Deputy Editor, who served concurrently as the Castle Press Secretary, Mr Elvis Aryeh, followed up and he intervened to restore order. But before we left, I took the mileage and warned them not to misuse the vehicle.

It emerged that Flt Lt Jerry John Rawlings, upon hearing that our vehicle had been seized, directed that it be released. However, because I had been maligned to their commanding officer, he insisted on seeing me before the vehicle could be released. I refused to see him until Mr Aryeh appealed to me that if Flt Lt Rawlings realised that his directives had not been complied with, there could be trouble. I was, thus, prevailed upon to see him.

When I briefed him about what happened, he resolved to deal with those who seized our vehicle and I had to beg for them. And that was the last time they stopped our vehicle and whenever we passed, they waved at me and I waved back.

The second encounter in 1995 was about a feature I wrote. Some soldiers chanced upon an accident scene and misbehaved. A truck carrying drinks was involved in the accident at Juaso. Some unruly individuals were feasting on the drinks and when they saw a military vehicle coming, they ran away. To their surprise, the soldiers stopped and not only drank what they could, they also carried cartons of beer into their truck and sped off.

I condemned the act and described the soldiers as cowardly thieves hiding under the cover of their uniforms. Two weeks later, I had a call from the Armed Forces Public Relations Directorate in what seemed to be a veiled threat to explain why I wrote the article. I said I was not a soldier and, thus, not answerable to the military for what I write. A week after that encounter, a Naval Commander and a rating came to invite me to Burma Camp to explain my feature and help track the suspects. Once again, I refused to go and that was the end of the matter. The article won me the best feature writer for the year.

The third encounter involved two junior officers from the 64 Battalion who had come to arrest a staff member to help with investigations over land issues. He had written a letter to the editor detailing how soldiers were taking over their lands. The personnel manager agreed to release him but I asked them whether they came with an official letter or I could talk to their commanding officer before the man would be allowed to go with them. I asked them to go and bring a letter the next day. They never returned because they were acting with impunity. Indeed, when he went home that evening, his whole family, including the parents, were at his house mourning because some soldiers had gone to the village to tell them that they were going to deal ruthlessly with him. Their sorrow turned into joy which had no bounds.

It was when the man came to work the next day that the import of what the soldiers sought to do, became clear. No wonder when the gentleman Mr S.K Tarkie, retired, he sent me a goodwill note in which he said, “Thank you very much Mr Ayeboafoh, do you know that you have become for some of us, our Jesus Christ as you helped in no small way to save my life.”

While I can never be compared to Jesus Christ, I was humbled and felt an inner satisfaction that at least, my persistence saved the life of an innocent man whose life could have been brutally cut short by miscreants under the guise of invitation by the military to help with investigations.