BY: Nana Kwasi Gyan-Apenteng
Category: The view from here 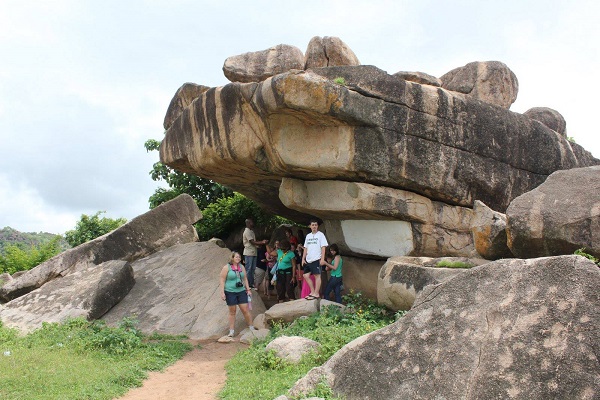 In any case, foreigners are more likely to visit places the natives know about and recommend Follow @Graphicgh

One idea that has had considerable traction on social media in the last few months is internal tourism. The discussion has erupted at different times in response to developments or lack thereof in the hospitality business or restrictions on the number of travellers to Ghana due to COVID-19.

However, no matter the cause of the concern, many people see internal tourism as some kind of solution to a problem. I see it differently.

I think internal tourism has to be promoted not because of troubles in the external tourism sector, but because Ghanaians deserve to see and know their country. The trouble is, people don’t know what there is to see around the country. We all know about the forts and castles on the coast; we know about Afadjato and Adaklu Mountains in the Volta Region, we know about the Larabanga Mosque in the Savannah Region and so on. There is a lot more to see but they remain hidden in plain sight.

Personally, I have been luckier than most Ghanaians. A combination of my parents’ work, school activities and work has taken me to almost every region in the country and I make it my business to visit places of interest wherever I go, even if the initial purpose is not for tourism. For example, as we all know, one reason for weekend travel in Ghana is funerals for which reason the term “funeral tourism” is emerging from its macabre shadows into the mainstream.

The idea itself has nothing morbid about it. Every part of this country, indeed every settlement has something so unique to offer and the idea is that when people attend funerals or other social events, the people of the host town must showcase what they have to visitors so that the guests can return for a longer stay or buy some memento or even decide to stay longer than they had planned to do. The trouble with this idea is that most people don’t know the value of what they have in their communities.

I once toyed with the idea of starting a private tourism programme that would take people, especially foreigners in Accra for conferences to the Akuapem Mountains for a half-day tour before their departure from Ghana. The idea occurred to me when I realised that a large number of people came to Ghana but only saw the Accra International Airport and their hotel and conference venue. In creating the programme, I learnt that besides the Aburi Botanical Gardens and the few known touristic places, every town in the Akuapem ridge had its own unique selling point. Although I did not formally launch the idea, I have taken scores of friends on such visits and my favourite showpiece was Apirede, the last town on the ridge.

Apirede is one of a few towns in the country that can be described as “end of the world” locations. There is no through-road anywhere from Apirede. Standing on a school field at the end of the road, one is left to wonder what lies behind the green hills to which there is no road access. It was the town’s selling point. Guess what? A few years ago, someone had the bright idea of constructing a road from the town to the Krobo area thereby destroying the End of the World mystique of the town.

All over the country, communities are sitting on assets that can be monetised to provide income and cut down poverty but they are not aware. To remedy this situation, the nation needs to create both a framework and awareness of our tangible and intangible assets that can form the basis of the country’s tourism industry, which still remains in its infancy considering its huge potential.

The first point to note in this regard is the fact that culture – broadly defined – will always be our primary asset. In Ghana, although we are blessed with some natural and man-made landscapes, they are not spectacular. Our tangible assets are related mainly to our history, traditions and culture. This is one reason why some of us have campaigned for the country’s administrative structures to reflect the relationship between culture and tourism in their proper perspectives and proportions. Culture is the mother of tourism and not the other way round. We will return to this subject another day.

The second and most important point is that because culture is our number one tourism advantage, every community, no matter how remote, small or impoverished, has this vital asset; in some cases, the more remote and deprived communities boast of the most alluring cultural assets, which unfortunately attracts no value at the moment.

Clearly, a major task waiting to be accomplished is identifying such assets and creating value for and with them. Between 2007 and 2011, the National Commission of Culture under the Chairmanship of Professor George Hagan set up the Cultural Initiatives Support Programme, CISP, with financial support from the European Union. One of the Programme’s activities was to identify and create a database of the country’s main cultural assets in a bid to put value on them.

This identification of cultural assets must be an ongoing work that must involve all communities across the country. It is not a complicated matter if we know what we are doing but the best way to go about this is to open up our communities to visitors from other parts of the country. Of course, the most obvious way of doing this is to enhance the cultural activities of our various festivals with new ideas and packaging to make them attractive to different audiences. We know that the Kwahu Easter is a successful festival which attracts thousands of tourists from the rest of Ghana and the way it has been enhanced with paragliding and other activities makes it a model of this kind.

As it happens, this year is the 50th anniversary of the World Heritage Convention which was signed by UNESCO in 1972. The Convention notes in its preamble that “the cultural heritage and the natural heritage are increasingly threatened with destruction not only by the traditional causes of decay, but also by changing social and economic conditions which aggravate the situation with even more formidable phenomena of damage or destruction.

There is a popular adage that says “if you don’t use it, you lose it” and it is the threat of disuse that looms for many of our heritage assets as they are neglected or actively destroyed. The government should take advantage of this convention’s golden anniversary to do a number of things. These must include encouraging our communities to identify their cultural heritage assets – both tangible and intangible and organising them in ways that can be shared and monetised.

For example, is there any village or town in the country that organises storytelling in a natural setting on moonlit nights? If properly organised, this form of traditional theatre can be made attractive to Ghanaians from other parts of the country to participate in an art form we are losing because we are not using as in the past. Indeed, with the new opportunities afforded by digital technology, it should be easier to package and share our natural and cultural heritage.

When we have done all we can to identify and package our assets, we should not wait for visitors to come and enjoy it alone. In any case, foreigners are more likely to visit places the natives know about and recommend. That is the way our domestic tourism itself will ultimately become a tourism asset for the bigger picture. An example is the use of social media in “selling” the recent Fancy Dress

Festival in Takoradi. Suddenly, a local festival has become an international sensation not because foreigners came and enjoyed but because locals showed themselves having such a splendid time. Happiness on that scale is infectious.