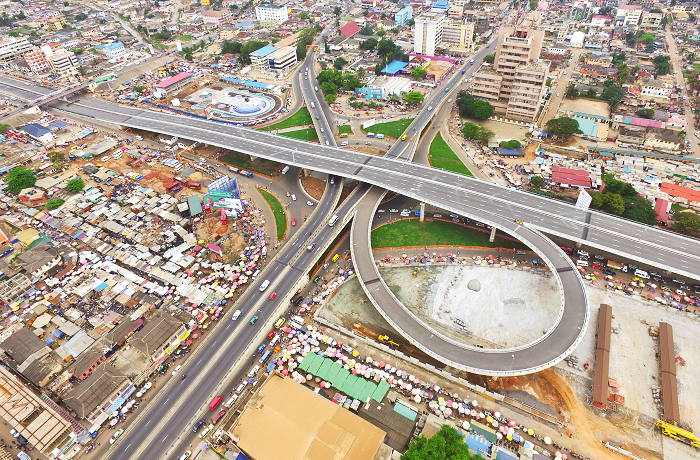 Did anyone ever observe what I noticed for some time on the Accra-Dubai overpass, heading from the Ring Road Central towards the Obetsebi-Lamptey Roundabout?

I observed with much concern, a collection of used tyres at two points on the overpass.  Those tyres were moved at some stage and lined up on a portion of the aluminum railings as one descends to join the main road towards the Roundabout.

I wondered what was going on and what the purpose for all those tyres was.  I got even more curious when the position of the tyres were shifted.  I wondered if someone was setting up a tyre fitting joint since joints of various forms are the craze of today, or was someone trying to cause mischief?

In my nearly 20 years of service with a multi-national company which had a penchant for safety, I have learnt to always be observant with my surroundings and be safety conscious wherever I found myself.  Whether at the work place, at home, at public places, in a public transport and even at church, one needs to look out for hazards and take precautions.  Indeed, in the company, the common cliché was that safety was our number one product.

Unfortunately, safety consciousness is something generally lacking in us as a people.  It shows all around us.  Fuel station attendants look on when some customers stop to fill their vehicles while on their mobile phone despite visible warning signs all around.  Food sellers by the road side are seen speaking on their phones while using naked fire in cooking, as in frying, grilling or boiling.  People are driving or riding motor bikes and are busy chatting on phones.  We plug so many devices into one adaptor irrespective of the voltage.

Each time I use the Accra-Dubai overpass and saw the collection of used tyres, I saw them as unusual and my safety alert automatically sent triggers.  In my subconscious mind I would begin to think of the hazards they may cause to road users.

We live in dangerous times where criminals employ smarter ways to ply their trade.  Even in slow moving traffic, one witnesses passengers being robbed of mobile phones, bags and anything visible from vehicles ahead.  It is for reasons of criminal motives that I was worried about the unusual gathering of used tyres on the overpass.

I have used the overpass a couple of late nights and realised how dead quiet that stretch could be at that time of the night.  So I thought, how about some criminally minded persons using these tyres one midnight when all is quiet to block a section of the overpass and hold drivers and their passengers to ransom?

Fortunately, my fears have been laid to rest.  As recent as two days ago, I used the overpass and to my delight, the tyres have all been cleared.  A few metres away in front of the Awudome cemetery, I saw a collection of tyres and thought maybe they were put on the overpass for a reason. Whatever the reason, for the sake of public safety, we need to think beyond every action we take.

The interchange on the whole, has made a lot of difference in the lives of commuters to and from the West of Accra for example.  Generally, it has helped to ease traffic at the Kwame Nkrumah Circle.  So far, it remains a beautiful, convenient and faster exit to and from Accra West and beyond.

We need to spot issues fast enough and question them before they blow up in our faces.  A lot of times, some of the indiscipline and impunities we see around us are due to the inactions of those who are empowered to take action to curtail them.  Our passive attitudes have given the leeway for the lawlessness and impunities choking us with no end in sight.

Otherwise why are recalcitrant commercial motorbike riders giving us such nightmares?  In the open glare of police officers, they break road traffic regulations with all the impunities and go scot free.  If indeed they are outlawed, why is the Driver, Vehicle and Licensing Authority (DVLA) licensing them to ply our roads?

The actions and inactions of authorities charged with ensuring public safety, environmental sanitation and public peace, to mention but a few, have brought us to where we are now.  Chaos, filth, increase in rape and defilement cases, robberies, insubordination and general lack of discipline at work, on the roads and in our communities have been and continue to be our headaches.

Our inner city roads should be periodically checked for untoward behaviours including take overs by squatters who have created unsightly homes along some of the interchanges.  The surroundings of such edifices should be kept tidy as they add to the beautification of the city.  And please, let someone clear all the squatters from our beautiful road networks.  These squatters are not only unsightly, they add to the filth generated on our streets.

A beautiful clean city in the making also means that our few flyovers are not only kept safe but those with overgrown bushes and lawns are attended to.  We need to plant more shrubs and flowers and make all roads to and from our interchanges forbidden zones for hawkers.  That is, if the city authorities continue to think that they should be allowed on the streets and continue to be eye sores unmindful of the dangers they expose themselves to.

Writer’s e-mail:This email address is being protected from spambots. You need JavaScript enabled to view it.