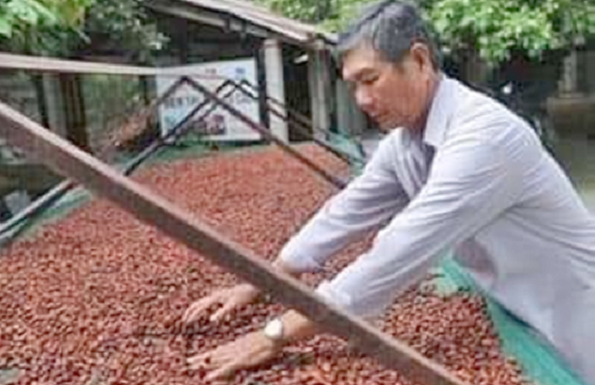 Last October, China announced it has successfully made its first-ever cocoa beans export to Belgium; grown in the South China island province of Hainan.

Recently, news that China had for the first time exported cocoa to Belgium took many Ghanaians by surprise. On both radio/TV, discussions took place on the implications for Ghana’s cocoa industry.

As I listened to the state official’s dismissiveness of the development as no potential threat worth looking at in Ghana, my mind went to ‘the noble/pugilistic art of self-defence,’ aka boxing!

I have absolute respect for Azumah Nelson. For the only African inducted into the WBC International Boxing Hall of Fame, Azumah’s humility/discipline is amazing.

But the more important reason for my respect for him is that, his profession, Boxing is a physically/mentally hard and difficult one.

When Komla comprehensively walloped me in Round One of our three-rounds “‘Novices Boxing Competition’ in the Ghana Military Academy in 1972, thoughts of how I was going to survive the remaining two rounds welled up in my mind.

Fortunately, I had an experienced Warrant Officer Class One (WO1) Judo Black-Belt, affectionately called ‘Chigoru-Kanu,’ in my red corner as my second.

His diagnosis of why I lost the first round, powerful words of encouragement, and the need to win the last two rounds to clinch victory, gave me the fillip I needed.

With the barracks crowd behind me, I fought fiercely like a wounded tiger. Eventually, I won on a split-points decision. But that was a pyrrhic victory!

For the next one week, I was constantly dazed with pains all over. Victory was as bad as defeat!

Using the boxing analogy, if an old champion learns that, a young boxer has emerged on the scene with a fantastic uppercut to jaws, which floors opponents in a flash, an old champion with wisdom cannot afford to be dismissive.

He does so to his own detriment. He must, therefore, improve on his defensive skills, or toughen his jaws, or both.

When Mohammad Ali, then Cassius Clay, burst on the boxing scene after winning an Olympic light-heavyweight gold medal in the Rome Olympics in 1960, nobody thought he would knock out the fearsome champion Sonny Liston to become the world heavyweight champion in February 1964.

According to the official, China’s climate could not support a cocoa industry. He delved into technicalities of China’s cold climate and erratic rainfall patterns making growing cocoa for export unviable.

Additionally, cocoa could grow only on one tiny island. In any case, the quantity China exported to Belgium was insignificant.

China’s arrival on the cocoa scene was, therefore, nothing to worry about, in his opinion, contrary to what other panellists thought.

Doesn’t Chinese presence here and the devastation to our environment and cocoa suggest anything to the official?

From time immemorial, Ghana had been the world’s leading producer of cocoa. When Ivory Coast overtook us in the 1980s, we shrugged it off consoling ourselves that, it was Ghana’s cocoa which was being smuggled there.

We failed to acknowledge that Ivory Coast had moved from small-acreage subsistence cocoa-farming to the scientific large plantation-type mechanised-farming which resulted in greater yields.

While statistics may not be readily available on the effect of ‘galamsey’ on cocoa production, pictures from some cocoa growing areas suggest a deliberate attack on cocoa.

Some farmers have threatened to cut down their cocoa trees and plant cola and other crops for which payment is more readily made than the state pays cocoa farmers.

Lamenting on the pollution of the Ankobra which she knew twenty years ago, the US Ambassador in June 2021 stated, “Ghana’s ‘galamsey’ is on steroids now”.

Asked what that meant, she said it meant a disaster-in-waiting which could damage Ghana seriously.

The state official’s stance during the discussion could be likened to the proverbial ostrich burying its head in the sand, and feeling safe, believing that because it sees nothing, nobody sees it.

The EU and US ambassador have spoken about the threat!

Whether or not China’s export of small quantities of cocoa makes it a potential competitor, harping on the opponent’s weakness, and not working on one’s strengths is strategically unwise.

We must think of ways of improving our production despite environmental/human and financial challenges.

A potential Chinese threat, like that of a young boxer with a deadly uppercut, cannot be dismissively wished away by the confident old champion Ghana on grounds of deficiencies Ghana credits China with, such as climate and cost-benefit-analysis, not making cocoa export a viable proposition for China.