Vanessa Williams visits Ghana: ‘I felt connected to my ancestors …’ 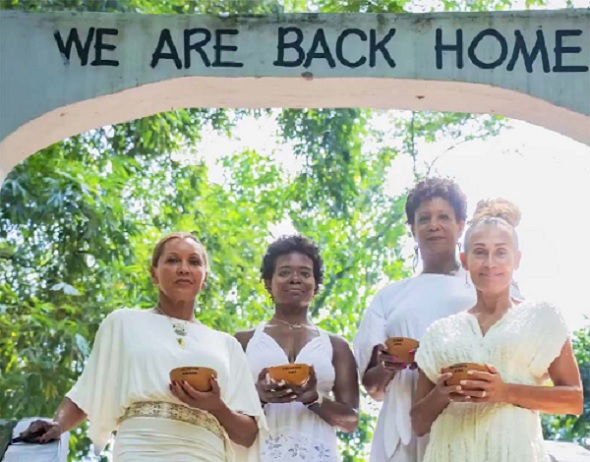 There are particular people who succeed radiantly - wherever they find themselves, in whatever it is that they put their minds to.

Love them, or hate them in a racist society, they’ll still succeed regardless.

Vanessa Williams is one of such people – gorgeous, full of purpose, poise, grit, tenacity and finesse.

She’s flourished as fashion designer, singer, dancer, actress – with many musical, film, and TV awards and nominations to her credit.

And to crown it all, she made history as the first African-American woman to be crowned Miss America in 1983/4.

Success, as they say, silences all adversaries and critics. But the road may endure a long struggle, riddled with perseverance, and untiring effort.

I recall sending a YouTube video of her recent trip to Ghana – titled “The Ease To Walk Around FREELY in GHANA” - to an American music mogul friend of mine in Burbank, California, who responded, “nobody thought she would be a great singer but she was”.

For starters, on Spotify, she has about 1.3 million monthly listeners. Her single track, “Save The Best For Last” has been listened to over 115 million times.

“The Sweetest Days”, my personal favourite, has clocked about six million listeners.

Writing about the US-Africa Summit in Washington DC (December 13-15,2022), I noted that “reaching out to Africans in the diaspora – including African-Americans - is a big deal.

So it’s a wonder why for so long, these vast opportunities were not exploited fully.”

Like so many African-Americans congregating in Ghana, the country offered them a magnificent sense of pride and belonging as shown from these excerpts from a recent interview on YouTube with Vanessa Williams (edited for space and clarity):

What we are taught as African-Americans is a minor bit of history - where we come from and what happened to us as captive slaves, brought to America.

So [the visit] was soul-stirring. I am Adjoa, born on a Monday …

The biggest kind of shift - besides feeling like you're welcome back - it's the ease: walking into a hotel, walking into a restaurant, walking into the airport, and there are black people all around you, and you're not being judged.

You know, as African-Americans, the first thing you're seen as is black, so you're always assessing what the environment is: Who are my allies?

How am I going to navigate? What do I need to do to fit in? It's a different feel here; and then there's just a sense of ease like, okay, we're all the same, and no one's judging you.

We immediately saw the opportunity: to bring our skill set and all the people that we know we want to have them have the same sense of ease and opportunity that we feel is here: that same kind of excitement to have people feel welcomed and especially being welcomed in our community as theatre actors, producers, writers and creators.

I think there's a tremendous opportunity here; and also music and art, so we're making connections.

We're going to come back; we plan to be here; we want to do a festival hosted by black theatre united.

I wish every African-American high school kid could come and learn.

I would hope that there be programmes in place and airlines to discount rates for more groups to come and have the experience that we had in just five days which is amazing.

I will never complain about anything ever again and the appreciation of the survival of our ancestors through this horrific journey and struggle and the fact that we were able to make it through.

Within the castle there is a church that was built by the Portuguese.

First, it was not a slave castle and then I found out it was a Catholic priest who gave them the idea that trading goods is one thing but trading humans would be more beneficial.

As a Catholic I was horrified.

It was stunning that that was a suggestion from a religion that I grew up with.

That blew me away: the juxtaposition of having a normal life up at the castle while you've got moaning people in pain, shackled, pregnant and stacked in a tiny room.

It was horrifying going through these tiny little doorways to get to where the ship would have been waiting for you: to see whether you could even survive the journey or not, after you've been there for three months having the ones that were defiant rot right next to you.

It was horrifying! The other aspect was the governor's bedroom - to come down and walk across a balcony where the women's chambers were, and be able to pick who he wanted to rape, drag them up a secret staircase, and then if they got pregnant to be separated from their child.

So, I don’t want to seem like this was such a horrible exchange just coming back to connect with the sorrow that our ancestors felt.

I also had a joyous time here - not only partying at Afrochella, yes; and we're going to Purple Pub tonight.

We've been at the Labadi Beach.

We've done yoga at Bella Beach as well, and I went to Shai Hills.

I thank my ancestors for having me here and I thank them for their guidance.

I know they're always with me for sure.