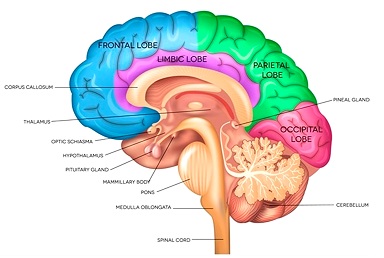 If you can see this writing, if you can read it; if you can think about the contents of this article; if you understand it, if you can hear yourself reading this article aloud, additionally, if you can hold the paper in which this article is written then, of course, then you owe these abilities to parts of the brain whose functions are to perform these activities.

Of all the marvelous things on earth, none is more outstanding than your brain.

For example, every second, some 100 million bits of information pour into your brain from the various senses-sight, touch, hearing, smelling and taster. To avoid being hopelessly buried by these huge numbers of items, your brain has a way of managing it.

You can think about only one thing at a time. So in order to cope with these millions of simultaneous messages, your brain adopts the following measures.

First, in the brain stem, which is part of the midbrain, below the cerebellum is a structure called the reticular formation, which is a network of nerves, the size of your little finger.

It acts as a kind of traffic control centre, which distributes the million of messages entering the brain, sifting out the non-essentials and selecting the essential ones for your attention by the cerebral cortex (which is the part of the brain that controls almost all your activities).

Each second, this little network of nerves permits only a few messages to enter your memory.

The second method is that there are some waves that sweep through your brain eight to 12 times per second. These waves cause periods of high sensitivity, during which your brain notes the stronger signals and acts upon them by means of these waves, your brain scans itself and focuses on the essentials. So many activities are going in your brain every second.

The brain is a mysterious organ. Three weeks after conception, your brain cells start forming. They grow in spurts up to about 250,000 cells a minute calculate this in hours, months etc.

After you were born, your brain continued growing and forming its network of connections. Your brain, unlike that of any other animal, triples in size in the first year of your life.

In time, your brain cells number about 100 billion. These are called neurons. Together with other types of cells, they are packed into your 31/2 lb brain which constitutes only two per cent of your body weight.

Note that the key brain cells, that is, the neurons do not actually touch one another. They are separated by what are known as synapses.

These are tiny spaces less than one millionth of an inch across. It is estimated that you may have 100 trillion synapses in your brain.

These synaptic gaps in your brain contain chemicals called neurotransmitters. So far, more than 30 of them are known. These chemical signals are received at one end of your neurons by some wire-like structures called dendrites – which look like tree – branches.

A particular neuron may have thousands of these dendrites, which allows neurons to receive messages from many different sources.

The signals received are then transmitted at the other end of the neuron by a nerve fibre called an axon. An axon can be about three feet in length and transmits messages at a speed of from two to 200 miles per hour.

In your neurons, messages are transmitted electrically, but the neurotransmitters transmit them chemically. Thus, the transmission of nerve signals is said to be electro- chemical in nature.

Each impulse (message) transmitted is of the same strength but the intensity of the signal depends upon the frequency of the impulses (messages) which may be as high as one thousand a second.

It is not certain what physiological changes occur in the brain when we lean. However, experimental evidence indicates that as we learn, especially in our early life, better connections are formed and more neurotransmitters are released.

The continued use of the brain strengthens the connections, thus, learning is reinforced. The pathways (connections), thus are strengthened.

Research has revealed that neurons that are not used fade away. Thus, the brain, like a muscle, is strengthened by use and weakened by disuse.

The above evidence shows the need to constantly learn.

Most of the connections seem to be precisely established at an early stage of development. As stated above, there are connections between the neurons, dendrites, axons, etc.

The number of these connections is astronomical. Each neuron may have thousands of connections with neurons. As stated earlier, there are 100 billion neurons making up your brain that can process between10 to 100 quadrillion messages in a second.

Each neuron may have 15,000 connections with other neurons. Then again there are also, microcircuits that are set up between the dendrite themselves.

It is estimated that the brain can hold information that would fill some 20 million volumes, as many as in the world’s largest libraries.

If your brain can hold as much information that would fill some 70 million volumes, what efforts are you making to utilise this huge capacity?

It is the cerebral context (the part of the brain that controls most of our activities) that sets man apart from any animal. It is less than a quarter of an inch thick with an overall surface of 1.5 square feet. It is convoluted in structure. If it is stretched, the cortex would measure about two and a half (21/2) square feet, with some 10,000 miles of connecting fibres per cubic inch. The human cortex is not only far bigger than that of any animal but it also has a much larger uncommitted area. That is to say it is not committed to only handling the physical functions of the body, but is free for the higher mental processes.

Your ability to act, to plan and to think stems from your cerebral cortex.

The Encyclopedia Britannica states that man’s brain is endowed with considerably more potential than can be realised in the course of one person’s life time.

It has also, been stated that the human brain could take any load of learning and memory that is put on it. And it can take a billion times that.

One scientist admitted that excessive brain capacity is the only example in existence where a species was provided with an organ that it still has not learned how to use.

Carl Sagan says “the brain is a very big place in a very small space” Fact is, what happens in this small space defies human understanding.

Dear reader, you have been taken through, in a nutshell, the structure, functions and capacities of the brain.

What remains is how you, I and others can effectively and efficiently utilise the prodigious capacity of this organ which Jehovah God has graciously endowed us.

The writer is a retired teacher resident of Wudome, Peki. E-mail: This email address is being protected from spambots. You need JavaScript enabled to view it.