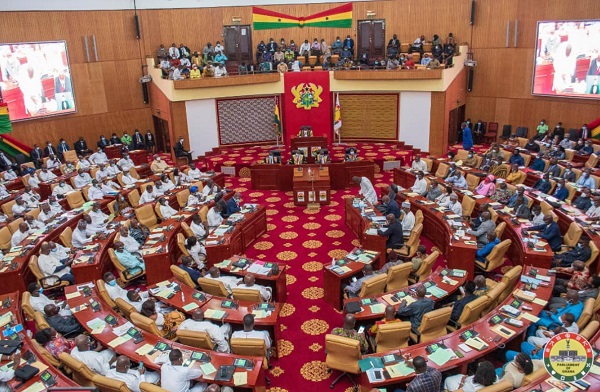 Members of Parliament in the Chamber during proceedings
30.5k Shares

A number of Ghanaians, including the respected Prof. J. Y.A Atsu and Dr Eric Oduro Osae, have optimistically argued that the balanced nature of our Parliament signifies effective and functional democracy ahead, as our elected representatives are more likely to act independently and objectively in deliberations before the House. I am no pessimist and will not want to undermine the hope and enthusiasm that such postulation carry with them.

However, I see one flaw running through the argument about the positivism generated by a balanced Parliament. It is the uncanny suggestion that it has always been the influence of the Executive and the desires of the Majority that have triumphed in legislative and deliberative undertakings. The issue of excessive partisanship and failure of individual elected members have been brushed away. More importantly, the appreciation or lack of appreciation demonstrated by MPs have been ignored in the arguments.

Apart from the First, Second and Seventh Parliaments, the differences in numbers between the Majority and Minority have not been such that it is just executive influence that has driven the course and cause of legislative undertakings, especially as specific numbers of MPs are required for certain legislative business. It is even more germane, if one considers the fact that majority of Ministers of State has always come from Parliament.

If MPs for their own parochial interests act in ways as a means of attracting the attention of the President such that they would be appointed as Ministers of State, they must be held accountable and not pass the blame on the Executive. MPs of the National Democratic Congress ( NDC) are happy that their candidate won the Speakership, yet they refused to attend the inauguration of President Nana Addo Dankwa Akufo-Addo on January 7, 2021, because the Presidential candidate of the party is challenging the results of the election in court. Yet, the Parliamentary and Presidential elections are different. In this case, how is the Executive influencing the independence of the MPs.

If the developments witnessed on the floor of Parliament on January 6 and 7, 2021 towards transacting a simple business as the election of a Speaker, whose decisions could readily be challenged by MPs, as we have witnessed over the years, including an encounter between Mr A. S. K. Bagbin as Minority Leader and Speaker Ebenezer Begyina Sekyi-Hughes in the Fourth Parliament, then we should not begin to laud the balance in the membership of Parliament as presently, as signalling good tidings. It could be a recipe for chaos.

This is not the first time that we have elected an independent MP. So all the time that independent MPs served in Parliament, were they counted as MPs or that it is only those put up by political parties who mattered. If our honourable members cannot agree on a simple matter as to what is a majority when figures and percentages are to be analysed, how do we have hope that democracy, the rule of law and due process would prevail. Indeed, the question of Majority and Minority does not exist in the Constitution. It is a creation by Parliament itself through its Standing Orders.

What was the meaning and intendment of the provisions on Majority and Minority, were these references to MPs from only political parties or about the total number of MPs. As a corollary, if there were more than two political parties represented in Parliament, how were the references Majority and Minority to be determined. In that case, if the leading two parties were tied with the same number of representatives, would the others have been ignored or is it because there is only one outsider from the two parties whose presence does not count in the numbers game?

It must be noted that the presidential candidate of the NDC, former President John Dramani Mahama, and my roommate at Commonwealth Hall, is in court challenging the results. Assuming that at the end of the day his cause is upheld, and the challenges to some of the parliamentary seats are dismissed, what would the NDC MPs do, would they then begin to court the NPP MPs to cooperate with them, if the independent MP still insists he will be with the NPP caucus in the House.

What is imperative, therefore, is that we need to drum home to our MPs that they must put the interest and concerns of the country and our people ahead of our party interests. MPs must be content with serving in Parliament, rather than focussing their attention on becoming Ministers of State, aspirations which drive them away from being assertively independent as MPs rather than gleefully serving as poodles as Ministers of State at the convenience of a single individual, the President, rather than at the pleasure of the people, the electorate.

Those who serve their people well can reap the full benefit of their people, as Mr Andrews Asiamah Amoako has demonstrated now, a hurdle that Mr Bagbin had to scale when his party at one time thought he was too independent and wanted to ditch him. Because the people had faith in him, they ignored the party's schemes and retained him as their MP. Squadron Leader Clend Sowu,had to go through a similar struggle, when the party that endorsed his candidacy turned round to campaign for an independent candidate, who eventually overthrew him.

We must focus on substance rather than form in our analysis of what we stand to gain from a balanced Parliament rather than the mere fact that when the numbers are even our elected representatives will be assertive, independent and objective. Democracy does not frown upon consultation and deliberation. Indeed, democracy thrives more on the rule of law and due process. It is only when these are fully satisfied and met that numbers begin to have relevance. Any democratic engagement that begins from numbers before considering the rule of law and due process is flawed.

Therefore, it should not matter what numbers each political party has garnered before our MPs act in our national interest instead of a fixation on partisan consideration. We should equally not assume that it is always the executive that undermines the resolve of the legislature to subvert the national cause for a partisan interest. MPs cannot only be good merely because they criticise or vote against Executive actions whether these are beneficial or otherwise. It is because the Executive is to promote the wellbeing of the nation and people that they are voted for differently from the legislature. The interest of an MP, who is voted for by a constituency cannot be larger or more important than the President, who is voted for by the whole country.

What we need more of our MPs is what we have seen in the election of Mr Bagbin as Speaker or as it would have been if more than the number of the NPP MPs had voted for Prof. Aaron Mike Ocquaye. The current Parliament will do democracy more good, not only when NDC MPs vote against requests from President Akufo-Addo, but where a sizeable majority of MPs from both sides of the divide, vote for or against a policy because it is in the best national interest or otherwise to do so.

The writer is the Chairman of the National Media Commission.