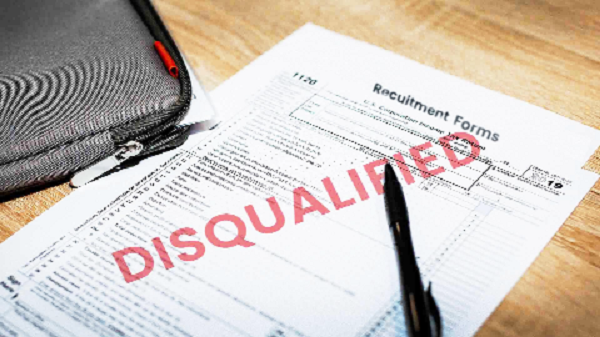 In the past week, the news portals have been blazing with pictures of long-winding queues captured from all the regional capitals in Ghana.

As it emerged, the Ghana Immigration Service (GIS) was reportedly undertaking a nationwide recruitment exercise to employ 2,000 new staff.

There were many reports of thousands of youth gathering at the designated centres across the country to take part in the process, and hopefully, to be favoured by Lady Luck to be recruited to end their misery as unemployed youth.

For instance, it is reported that in Ashanti Region alone, about 16,000 youth turned up for the exercise in Kumasi.

According to GIS, any person who wanted to apply to join the service had to have the required qualification.

These included having a First Degree, HND, Diploma, NVTI/GES/COTVET Certificate in Tailoring or SSCE/WASSCE education, depending on the position one intended to apply for.

Apart from these three requirements, all the other requirements were the same for all applicants:

• Must be a Ghanaian citizen by birth with no criminal record.

• Must be physically and medically fit.

• Must be of good character.

• Must not be bonded.

Once a person satisfied these clear conditions, they could apply as the first stage in the recruitment process.

Each applicant had to pay GH¢100 as application fees which, most likely, was non-refundable.

The second stage in the recruitment process is what happened this past week at the various centres in the 16 regions.

By several media accounts, among other formalities, the bodies of the applicants were physically screened in search of deformities, tattoos and scars. 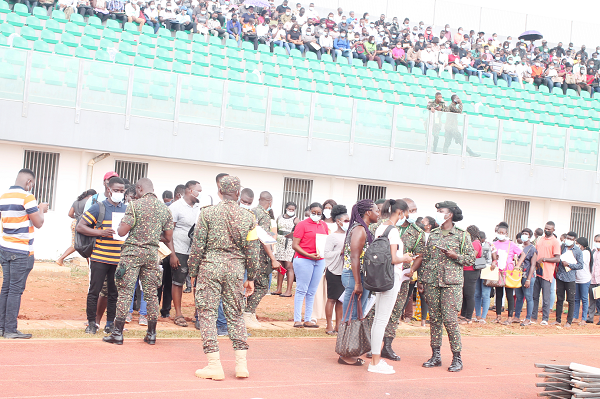 Thousands of youth waiting to be processed for the GIS recruitment

For several years, we have come to accept seeing tens of thousands of our youth lined up under the unbearably scorching sun to apply for job openings available for just a thousand or two, as normal.

And why would it not seem ‘normal’ to us?

Our media are always sure to visit such phantom of employment creation and capture our youth at their most vulnerable; wearing anxious, forlorn and melancholic looks.

We are fed with such pathetic scenes as a source of entertainment.

The 2021 GIS recruitment process was no exception. The so-called second stage of the recruitment was the stage for the performance (pun intended).

There were many stories of bizarre and outrageous grounds on which several thousands of applicants were disqualified.

Females were reportedly disqualified because they had two piercings in their ears; a male with one piercing would also be disqualified. And so were those sporting tattoos.

Some applicants with slightly unaligned legs, pejoratively referred to as ‘K legs’, were disqualified.

Applicants who had the misfortune of having a body lined with stretch marks were also disqualified.

And so were those with scars from surgeries.

The colonial-era height requirements for entry into the service were applied.

It was shocking to hear and see this in the media. Who takes a sharp blade and marks stretches on their own skin?

Who misaligns their own legs to get them ‘K’ shaped?

Why should anybody be ‘body-shamed’ and blamed for not reaching a height of 5 ft. 8 inch or 5 ft. 4 inch when they had no part in picking their genes or being malnourished in infancy, or even in adulthood?

How does having one or two piercings in one’s ears prevent them from stamping ‘arrival’ in someone’s passport?

How does one’s immutable physical features foisted on them by the accident of birth or sickness become their undoing in seeking employment in a democracy?

To have adopted such crude, deceitful and discriminatory criteria to disqualify thousands of applicants, therefore, was plainly unlawful.

The Constitution of Ghana and the Labour Act have copious provisions that speak against discriminatory practices in employment.

As could be seen from the qualifying requirements announced by the GIS and posted on its website, none of these features that were used to send many people away were part of the requirements.

If the GIS intended these features to be part of the pre-requisites for recruitment, they should have indicated so in the announcement they made on their website.

Many of the applicants would have stayed away from the process; the scorching sun, news-hungry journalists and, most importantly, saved their GH¢100.

The GIS must bow its head in shame and immediately refund the application fees of all those who were disqualified on grounds other than those set out by the service itself on its website.

To keep their application fees will be tantamount to unjust enrichment.

Coming right upon the heels of the recent disgraceful Law School admissions process where potential students who obtained the 50 per cent pass mark were denied admission based on a criterion that was never communicated to them till after the exams, deceitful and unlawful conduct in our public space is becoming one too many.

The earlier we remove this cancerous tumour, the better.