Steps for the Progress of the Black Race 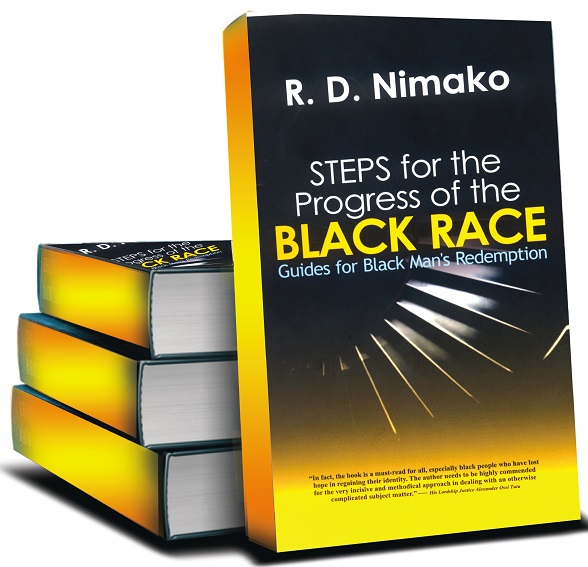 Steps for the Progress of the Black Race Follow @Graphicgh

How many times have we not heard this rather derogatory cliché “Blackman, black sense,” here in Ghana, which means in effect that the Blackman does not conform to laid down norms and or mores and has his own set of ideas and ideals when it comes to business, discipline, marriage or whatever.

This and many other things, including colonisation and domination by others for centuries, have kept the Blackman and his race in the background, preventing them from asserting themselves as they should and showing the rest of the world, what made them the purveyors of civilisation.

The Black race have been known to be very vibrant and led in the civilisation of the world and, therefore, the author, Richard Danso Nimako, gives us a book, which he has titled ‘Steps for the Progress of the Black Race’ (Guides for Black Man’s Redemption) in which he attempts adroitly to awaken the sleeping Black man and so has reproduced, in the opening section of the book, excerpts from Marcus Garvey’s advice to Black people in 1923.

“Make up your mind that you’ll rise to the knowledge of your soul.” Marcus Garvey said, “The early Africans were able to beat the fathers of our civilisation because they persevered intheir object.

Richard Danso Nimako said his motivation for writing this book came from the unfortunate incident in Minnesota on May 25, 2020 in which a white policeman was caught on camera strangulating to death a black “suspect”, George Floyd.

The author pointed out that the reaction to this incident was a
confirmation that the world now does not accept human rights abuses irrespective of who commits them and against whom.

“I did not immediately attribute the unfortunate incident to racism, but as it unfolded, Blacks in came out with many such incidents that had happened in the recent past against them to logically tag the George Floyd case and all similar ones to racism against Blacks”.

A presentation of a brief history and characteristics of the Black race with succinct data including maps and pictures as well as the disposition of Blacks in various groups and regions across the world is extremely educative.

The book touches on why Blacks are making less progress and once again with appropriate convincing data, discusses the factors that impede development in sub- Saharan Africa as ethnic biases, lack of nationalist drive for development, low development of Agriculture, low patriotism among the youth, wanton destruction of the environment, preference of foreign products, lack of intra-African trade and over-reliance of religion to solve practical problems and many more.

Richard Danso Nimako also suggested solutions that he believed should make Blacks progress, as breaking the neck of ethnicity, putting national interest first, prioritising agriculture, Blacks staying in their countries to develop them, encouraging intra-African trade, uniting for progress, encouraging self-promotion, ceasing the Dependency Syndrome etc. and above all respect for fellow Blacks.

Notable inventions and achievements by Blacks in Africa and those by Black Americans have a place in the book as well as biographies of some prominent Blacks across the world.

Among them are heavyweights such as Marcus Mosiah Garvey, Kwame Nkrumah, Thomas Isidore Noel Sankara, Alhaji Aliko Dangote, Booker T. Washinton, James Emman Kwegyir Aggrey, Kofi Annan, and Nelson Mandela, Kwadwo Safo Kantanka and many more that space would not permit me to include.

Author Danso Nimako’s work is a wealth of information, especially on the Black race and His Lordship Justice Alexander Osei Tutu has the following to say about the book.

“In fact, the book is a must-read for all, especially Black people who have lost hope in regaining their identity.

The author needs to be highly commended for the very incisive and methodical approach in dealing with an otherwise complicated subject matter.”

What else can I say?