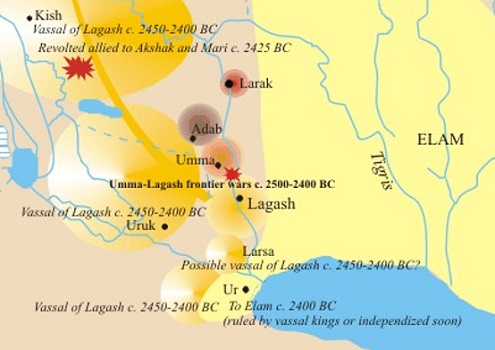 The conflict between the ancient Sumerian city-states of Lagash and Umma, two dozen rival city-states that flourished on the flood plains between the Tigris and Euphrates rivers of ancient Mesopotamia, now the Middle East, is the earliest record of inter-state war in history around 2350 BCE.

The Bible also has a record of several wars that took place among several states in the Middle East. By 2500 BCE, the typical Sumerian city-state possessed several thousand inhabitants, with most living within the city’s high mud-brick walls.

Fortification was necessary because the flat terrain of southern Mesopotamia left city-states vulnerable to attacks, and frequent conflicts over water rights, grazing lands and trade routes made war an ever-present threat.

War continued to plague the Middle East region long after the tragic clash between Lagash and Umma. Over the millennia, many armies marched into the region. When seen through the prism of history, the Syria War and US invasion during the spring of 2003 against Iraq leader, Saddam Hussein, were simply the latest outbreak of war in this ancient land.

Talk about religion, ethnic, tribal, border, secession, resource, and all the factors that bring about intra and inter-state conflicts, all have their feet planted in the Middle East. Since the discovery of oil in that region, great power interest in the Middle East has generated several conflicts in that region. The current civil war in Syria, the 2003 invasion of Iraq, the Gulf War, all have their root cause in oil politics.

The Kurds share a common culture and many aspire to create a state of Kurdstan. But Kurds reside in territory that is part of four different countries – Turkey, Iraq, Iran and Syria, all of them strongly oppose giving up control of part of their territory to create a Kurdish state.

The conflicts between Kurds guerrillas and the states in which they reside is one of the conflict the Middle East is grappling with in addition to the protracted Israeli/Palestinian one.

An attempt to defend religious values in the Middle East has generated into immergence of extremist groups that call for the rejection of Western political conception of the state based on individual autonomy in favour of more traditional Islamic orientation based on community.

These groups aspire to create a single political state encompassing most of the Middle East as existed in AD 600 to 1200.

The recourse to arms and violence by most of these extremist and fundamentalist groups to realise this goal have created a major headache to most governments in the region, and their activities have led to the stereotyping of the Middle East and Islam as a source of global terrorism and violence extremism.

Currently, violent conflicts are being prosecuted in the name of all the world’s major religions. Islam, the religion practised by Muslims has been frequently stereotyped in European and North American political discourse, especially at times of conflict, such as the 1973 oil embargo, the 1979 Iranian revolution, the 1991 Gulf War and the period since the 2001 terrorist attack on the twin towers in New York.

Religious, territorial, ethnic, border, resource and many other sources of conflict may exist in the Middle East, and also may have a reputation as a region with the earliest records of inter-state wars in history, but the Middle East is finding itself in a different world today.

Peace that is the pillar of Islam, the religion of the area is working its way across many countries and those of the Middle East are not an exception.

Qatar has allowed a colourful ball to drop in the Middle East. This is the news the world is hearing about the region at the moment.

Far different from the noise of bombs and bullets that once dominate discussions of the region.

Countries, both great and small, are playing with this ball in peace and happiness in Qatar. The Middle East is leading the way in making the world forget the time of fighting one another with bombs and bullets.

The writer is with the Institute of Current Affairs and Diplomacy (ICAD). E: mail: This email address is being protected from spambots. You need JavaScript enabled to view it.