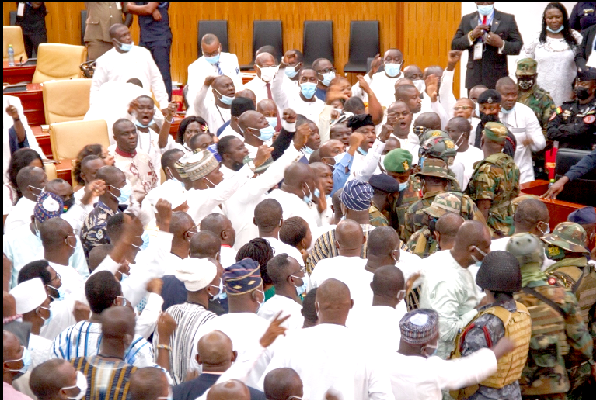 • Opposition members of Parliament, as they sang to show resistance to the army in Parliament on January 7, 2021
30.5k Shares

In his poem Paradise Lost of 1667 on the sacking of Satan by God to hell, the English poet John Milton invented the word ‘pandemonium’, as the capital of hell. He described pandemonium as the “high capital of Satan and his peers!”

January 2021 started on a whirlwind note in two capitals, Washington-DC and Accra! Almost simultaneously, there was pandemonium in the Capitol, Washington-DC on January 6, 2021, and Parliament, Accra early January 7, 2021.

The world’s leading exponent of democracy — USA, and Africa’s beacon of democracy — Ghana, both came out badly bruised, losing their cherished reputations as democracies par excellence.

In Washington-DC, the iconic Capitol Hill on which the US Congress stands was stormed by President Donald Trump’s supporters.

Incited by Trump, they were to prevent the certification by Congress of Joe Biden as the winner of the 2020 US presidential elections.

With Congress in session, thousands of Trump supporters breached security, stormed the Capitol destroying things and desecrating Congress with faecal matter. For Trump who described African countries as “sh--hole countries”, it was interesting twist to see his supporters smear the Capitol with excreta.

Ironically, the show of force displayed during the ‘Black Lives Matter’ demonstrations after the murder of George Floyd was absent, as stated by President-elect Joe Biden. Eventually, four insurrectionists and a police officer died.

Early January 7, 2021 in Accra, Ghanaians watched in disbelief and shock our Parliament Chamber converted into a blend of a rugby stadium and a boxing/wrestling ring where MPs violently displayed their snatching, sprinting, slapping, stampeding and sitting-on-lap skills. In the confusion, armed soldiers and police also entered the Chamber!

On the first sitting of the eighth Parliament on January 15, 2021, the Speaker strongly reprimanded the MPs for their “unruly behaviour” and “despicable conduct!” He warned he would have none of that on his watch.

In an earlier article, I told the story of the porcupine which read: Thomas Yaw Kani was a prolific Twi writer whose books we read in primary school in the 1960s. A story was about the porcupine, known in Twi as “ko-to-ko!” Porcupines are large rodents in the same family as the popular grass-cutter whose meat, “akrante nam”, in light soup is a Ghanaian delicacy.

The porcupines’ coats of sharp quills protect them against predators. They are gentle and will normally not initiate an attack. However, if attacked, porcupines release their quills in self-defence.

Long ago in winter in temperate climes, porcupines were forced to huddle together for warmth and survival. However, their quills pricked one another. Thinking this discomfort unbearable, they went their separate ways individually.

Soon, many of them died from the cold. The survivors quickly came together again, having realised that in unity lay strength and their survival.

Young Kotoko, affectionately called Kot-k, was as brilliant as he was naughty. With the protection of his quills, however, his teachers could not discipline him for misbehaving. While playing at home with friends, Kotoko misbehaved.

With his friends wondering how she was going to discipline him, Mama-Kotoko turned Kot-k on his back, and exposing his soft underbelly, she administered six strokes of the cane.

To the amazement of his friends, Kot-k wailed inconsolably. Asked why only six routine strokes could make him cry so bitterly, Kot-k replied that he did not cry from the pain of being beaten, but because his own mother had betrayed him by exposing his weakness to the world in showing them his Achilles’ heel.

His hitherto invincibility was gone!”

Similarly, Ghana wept like Kot-k at the betrayal by our parliamentarians!

Words such as ‘unbelievable, shameful, disgraceful’ have described events in Parliament on January 7, 2021. To say we fell from grace to grass may be an understatement. Disappointed African friends who hitherto held Ghana in high esteem teasingly welcomed us to the league of Thomas Hobbes’ jungle-law Parliaments where animalistic aggressiveness and violence reign over restraint and decorum.

A venerable statesman opined that, “Parliament is now perceived as a goldmine where people go not to serve, but to make money.”

Otherwise, why should parliamentarians ask for ex-gratia of GH¢400,000 each after four years in Parliament when they see nothing wrong with teachers and nurses being given less than GHS10,000 gratuity after 30 years’ service?

Like Mama-kotoko, our parliamentarians have shown Africa our Achilles’ heel by exposing our soft underbelly. Like the USA, never again shall we be revered as we were before January 7, 2021.

What is the point in violently attaining power knowing that violence begets violence, with Ghana thrown into anarchy?

Ghanaians, let us live in unity like the porcupines and suffer little pricks of discomfort and disagreement, rather than go our separate ways as individuals and die!

Parliamentarians, lead Ghana by example in obeying the laws you make, and make our nation great and strong! Fellow Ghanaians, wake up!