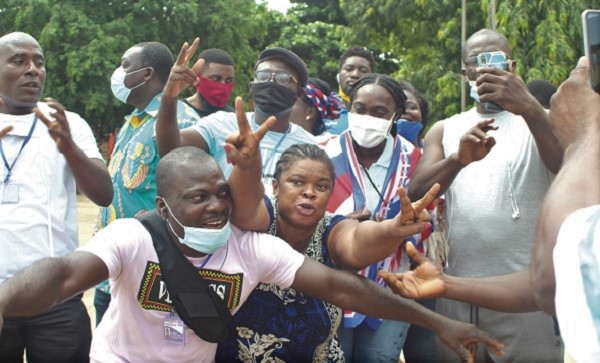 Some NPP sympathisers jubilating after the primaries
30.5k Shares

Like any other electoral process, the NPP’s parliamentary primaries at the weekend produced both scenes of ecstasy and pain.

I can only imagine what was going through the minds of the candidates as they ramped up towards ‘D-Day’. With COVID-19 having delayed the process by about two months, only God knows how many frayed nerves were circulating in the system.

Of course, I decamped to Kumasi for the weekend to show solidarity with my boss and MP for Manhyia South, Dr Matthew Opoku Prempeh, who went in unopposed.

Personally, I have never faced any serious electoral challenges in my five decades on this beautiful earth, bar my failure to secure the dining hall prefect slot in secondary school back in 1986.

Actually I was disqualified during the vetting process in the run-up to the election and, therefore, did not make it unto the ballot paper for reasons I vehemently disagreed with.

I look back wistfully at what could have been. Thirty-four years on, I still enjoy light-hearted arguments with the eventual winner, my mate Victor Asante, the CEO of FBN Bank, insisting that I would have beaten him fair and square had I sailed through vetting.

Not for the faint-hearted

In our rather toxic and highly adversarial political space, I think it takes quite a lot of steel and chutzpah to offer oneself up for elected office.

Of course, if you are contesting for Parliament in a safe seat, then the real battle lies in the primaries, after which it is relatively smooth sailing to the election proper.

Who knows, if he wins you could be appointed to a decent post as compensation for willingly offering yourself for the electoral slaughterhouse situated in a cul-de-sac.

Whichever way you look at it, elections are not for the faint-hearted, even outside politics. I certainly do not have the knack or wherewithal for elected office, so on Facebook, I am happy to tout myself as the Honourable Member of Parliament for Facebook South and run my mouth 24/7.

Sadly this comes without the rather juicy perks of a real MP, even though they are always complaining that the returns are poor and yet fight tooth and nail to stay in the House.

Of course, I am the perennial sole candidate and I have declared it my seat for life, so I have the luxury of being able to make noise on Facebook about elections while sipping ice-cold beer on hot afternoons as real, serious candidates pound the streets to canvass for votes.

When some people suggest that I run for office, I laugh heartily and tell them to be serious, and that I am allergic to ballot boxes.

While success can be exhilarating and put you on cloud nine, defeat can be crushing, especially when as an aspiring parliamentary candidate you have been given all the sweet assurances by delegates that it is a ‘cool chop’.

Sir John of NPP fame summed it up quite succinctly when he declared ‘Fear delegates!!’ after his defeat in Tamale some years ago as he sought to renew his mandate as General Secretary of the NPP.

I do empathise with those who were unsuccessful at the primaries and will be forced to watch the main fight in December from the sidelines of the ballot paper as others do battle to enter or re-enter Parliament.

On a personal level, I was disappointed to learn that my good friend Mike Oquaye Jnr was unsuccessful in his Dome Kwabenya bid and my school mate Kofi Ofosu Nkansah could not dislodge the incumbent at Asante Akyem Central. Both are tough cookies and they live to fight another day.

On the plus side, things were quite good on a personal level. I was delighted to learn that my former school OWASS had seen the retention of its four incumbent alumni MPs; Prof. George Gyan Baffuor (Wenchi), William Aidoo (Afigya Kwabre South), George Oduro (New Edubiase) and Eugene Antwi (Subin).

The successful run extends to the education sector where I work. My work colleagues, Ekow Vincent Assifuah (Old Tafo) and Dr Prince Armah (Kwesimintsim), were also successful in securing their respective parliamentary candidacies on their first attempt.

I share an office with Ekow and Kwasi Obeng Ofosu (a.k.a. Baba Tauffic) at the Ministry of Education and we are quite an unholy trinity of sorts, so Kwasi and I were particularly delighted at his win, which came to many as a surprise.

The Minister of State for Tertiary Education, Prof. Kwesi Yankah, clinched the candidacy for Agona East much earlier in September 2019 during the party primaries for ‘orphan constituencies’. So all in all, there was a good reason to be delighted last Saturday night.

It appeared that long before the primaries, the electoral death warrants of Dr Mark Assibey Yeboah (New Juaben South) and Daniel Okyem Aboagye (Bantama) had been signed and sealed, and it was only a matter of time for execution.

At Bantama in particular, the onslaught was as fierce as it was expected, and the landslide was also as expected. It appeared that delegates were quite happy to make Okyem Aboagye a one-term MP in very much the same way as they made his immediate predecessor, Henry Kwabena Kokofu, a one-term MP.

Other incumbent big guns like Joseph Kofi Adda (Navrongo Central) and Vincent Sowah Odotei (La Dadekotopon) were felled. I have a particular soft spot for Ama Sey (Akwatia) and was sorry to see her lose her bid for re-election.

There is no doubt that as with every electoral contest, egos have been bruised and sharp, acerbic words have been thrown around as things heated up.

While some candidates have tasted exotic champagne by their win and enjoyed the smooth bubbles, others have downed vinegar by their defeat and felt its sharpness on their tongues and in their throats. But there can be only one winner per contest.

I am confident that the NPP will be able to find ways to heal the raw wounds of those who have been vanquished.
With literally only five months to the general election, it is important that the primaries are put in the past and all hands join to get ready for battle in December.

For those who suffered defeat, it is crucial that they rally round quickly and work with those who won, especially if they have any dreams of staging a comeback or they expect to play some role in the party in the future.

Their ability to put their personal disappointment on the back burner, respect the delegates’ choice and work towards the party’s goal is a huge asset for any future ambitions.

Essentially, party primaries constitute friendly fire within a family.
Now that the primaries are over, it is time to close ranks because the real fight is about to begin.

Rodney Nkrumah-Boateng
(This email address is being protected from spambots. You need JavaScript enabled to view it.)