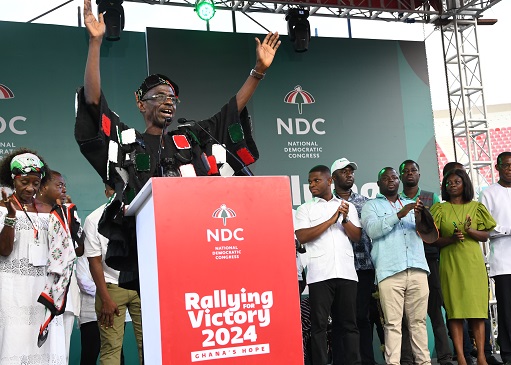 In a country where party faithful hear no wrong because their leaders speak and do no wrong, I think Ghanaians (civil society) should, in the light of recent revelations, come out in their numbers and call out certain party leaders for their actions and utterances related to the verdict of the Supreme Court in the 2020 election petition.

If we love our lives and the future of Ghana, the first person to call out should be former President John Dramani Mahama. For example, did he know, at the time of deciding to go to court on December 30, 2022, and during his press conference on the day of the court’s ruling on March 4, 2021, that all along, he and the party had no case, as now being admitted by Mr Asiedu Nketiah?

Hear Asiedu Nketiah, in a “leaked tape” of a meeting he held with delegates to the latest National Democratic Congress (NDC) National Delegates congress: that on the night of the 2020 election, at the most crucial time when the NDC was to do its collation, “the system that the Information Technology (IT) Director brought and touted as robust got crushed after collation of results of five regions.”

He concluded: “That is why we could not get results at the right time to challenge the Electoral Commission (EC)”.

What could be more damaging than the revelation of the “truth” that the party’s most trusted lawyer, Tsatsu Tsikata, after perusing the NDC’s evidence, told them to look for a new lawyer since the documents did not provide sufficient evidence and could not be relied on in court to make a case.

“That is why when we went to court and they asked me about my results, I said I did not bring any results. I hope you all heard. I don’t know how to lie,” he intimated.

Did Mahama know this truth in those days following the declaration of the election results when the NDC was calling one press conference after another with allegations which so incensed the party faithful to set Ghana ablaze – burning tyres in the streets and terrorising the entire country, region after region? Remember the storming of the EC premises by NDC Members of Parliament, led by Haruna Iddrisu?

So why did he tell the VOA interviewer that “the NDC could not make its case because the pink sheets used by the EC to record the election results did not make room for the people to be verified before they could vote”?

Why are all these questions and issues pertinent now? If judges were killed in 1982 for daring to declare their verdict in cases which did not go the way some elements within the Provisional National Defence Council (PNDC) thought, is it inconceivable; is it far-fetched to fear that the NDC leadership’s actions could easily have ...

Remember, former President Mahama has stated that he filed the 2020 Presidential Election Petition at the Supreme Court to calm the charged political atmosphere to avoid electoral violence. Addressing the United States Chapter of the NDC at Bentley University on March 27, 2022, he said: “The atmosphere was quite charged, a few of our people took to the streets. There was a threat of violence and we didn’t want to go down that path, so it was better to use what the Constitution has given us”.

Mr Mahama alleged that the country’s judicial system was being manipulated by political powers and, therefore, called for judicial reforms.

I am almost certain that like me, other Ghanaians have been asking, who “leaked” the tape “secret and confidential” conversation that Johnson Asiedu Nketiah, then incumbent General Secretary of the opposition NDC, had with some delegates to the latest party congress.

When the meeting was held is not in doubt - ... What is in doubt is how Asiedu Nketiah, happened to be at Peace FM in the final week of campaigning, and “accidentally” dropped by on the station’s morning show at the time panellists were discussing the tape’s content. He was just on time to be asked if the content was true, and for him to “reluctantly” confirm that everything on the tape was the truth.

Don’t forget, Kokrokoo is the NDC’s most hated radio show which the party has sworn, since 2020, never again to be associated with. Until last week, when the tape “accidentally” went viral, the subject of Asiedu Nketiah’s performance at the Supreme Court hearings was the party’s taboo subject, its ntamkesie.

Confirming the content of the tape was, in effect, admitting that the Supreme Court judges were right in their verdict that the NDC had no case and so therefore the New Patriotic Party (NPP) genuinely won the 2020 presidential election. Why was the admission of this truth so important to the party two years after the verdict and two years after the most strident attack on the Judiciary by its vanquished flag bearer, John Mahama?

Why was it so important for the party faithful, especially the delegates, to hear that Ofosu-Ampofo had a problem with JDM, without doubt, the most popular and favoured to win the flagbearership race for 2024?

According to him, eventually, the meeting was divided into two – Mahama faction and Ampofo faction — and they started insulting each other.

“This forced the then 10 regional chairmen to hold a caucus meeting and came out with a resolution to advise Chairman Ofosu-Ampofo that they were on a slippery road. Because no matter what you do, Mahama would still win the flagbearership of the NDC. So he is a presumptive leader and the suggestion was also not bad,” he intimated.

The Writer is Executive Director, Centre for Communication and Culture. E-mail:This email address is being protected from spambots. You need JavaScript enabled to view it.