BY: Oheneba A. Akyeampong
Category: Opinion 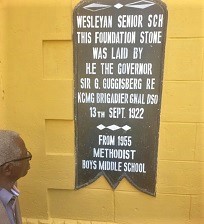 The plaque at the entrance of the school
30.5k Shares

“This foundation stone was laid by H. E. Frederick Gordon Guggisberg, Governor of the Gold Coast”. Very few visitors to the Methodist Junior High School ‘A’ in Winneba will miss the plaque as they enter or exit the head teacher’s office.

I first came across the inscription in September 1961, when I started schooling in the then Methodist Middle Boy’s School. I have since known that the list of projects attributed to Governor Guggisberg was not exhaustive.

According to most history books, it was during his reign that landmark projects like Achimota School, Takoradi Harbour, Korle-Bu Hospital and Achimota Forest were established.

These were what earned the man the accolade ‘Sunshine Governor’.

The Wesleyan Senior School is often omitted in history books apparently because Winneba, the location, was a small town relative to Accra, the capital city and Takoradi, nation’s only harbour city at the time.

But that will be a weak proposition because I have recently learnt that it was Guggisberg who constructed the Kwadaso Agricultural Institute.

The year was 1922, and the location was a suburb of Kumasi, the second largest city, even at the time.

The Methodist School in Winneba deserves pride of place in Guggisberg’s achievements because of the route he traversed in order to reach Winneba. When the automobile arrived in the Gold Coast in 1903, it offered an opportunity for colonial authorities to intensify the exploitation of raw materials for export.

The road network complemented the railways started by European mining companies for the same purpose. Both rail and road networks passed through resource-rich communities.

Since there was no gold, cocoa or timber in the coastal plains between Accra and Cape Coast, there was no direct road connecting the two cities. The road took a long detour through towns endowed with goods for export.

(The present ‘coastal’ road from Accra through Odupong-Kphehe (now Kasoa) and Awutu Bereku- Winneba Junction-Apam junction -Essuehyia to Mankessim, was constructed in 1954 when Kwame Nkrumah, as Leader of Government Business, might have pushed for a better integrated, inward-oriented transport network.)

So, in 1922, from Osu Castle, Guggisberg travelled northwards to Nsawam, turned west to Adeiso through Bawjiase to Swedru before turning southwards to Winneba.

The building was the second purpose-built school in the Winneba area, but the first to be built of brick and mortar.

The imposing storey still stands out in the vicinity, though the windows and wooden decking need replacement.

It produced a significant number of prominent personalities of Winneba. Some eminent products who have passed on to glory include Alex Quaison-Sackey, Ghana’s Ambassador to the United Nations (1963 -1965) and first African President of the UN General Assembly; Neenyi Nkensen Arkaah, MP for Effutu (1979 -1981) and Vice President of the Republic (1993-1997); Professors K. B. Dickson and C. Yarney-Ewusi who became Vice Chancellors of the University of Cape Coast in 1980-1986 and 1986-1992, respectively.

The Most Rev. Prof. K. A. Dickson, President of Methodist Church Ghana (1990-1997) also passed through the gates of the famous school as did Benjamin Kwesi Oppon, first Effutu lawyer and Deputy Commissioner of CHRAJ (1993-2005).
David Ghartey-Tagoe (Member of the Order of the Volta), first Ghanaian television newscaster and a consultant to the United Nations who helped to establish television stations in several African countries, was also there.

Before his political exploits in Accra, Kojo Thompson, the “enigmatic nationalist”, whom the longest street in the city centre was named after, attended Methodist School in Winneba.

Dr Don Arthur, Minister of Works and Housing in the late 1980s, as well as the Most Rev. Titus Awortwi-Pratt, Presiding Bishop, Methodist Church Ghana (2014-2019) were both old boys.

Madam Margaret Forson (Mama Krishna), the first Effutu woman to enter university and a renowned journalist who thrilled readers of The Mirror with her captivating articles, was an alumna.

Until elementary schools lost their shine in the mid-1980s, Methodist Middle Boys School was the school to beat in almost all facets of school life, namely academic, sports, cultural performances, etc.

The Methodist Old Students Association (MOSA), Winneba, has been revived to spearhead the year-long celebration of our centenary.

Our threefold objective is to honour the memories of all who contributed to establishing such a formidable institution from missionaries to managers and teachers to learners.

We also hope to raise funds for its renovation and motivate present day teachers and learners. Clearly, the last-named objective is the most daunting.

Gauged by results of Basic Education Certificate Examination, we face an uphill task. The imposing building is still functional.

Unlike the Certificate A and B class teachers of our time, present-day learners have graduates and diploma holders who do subject-teaching.

Yet, …this, however, is not unique to Methodist School. Fifty years from now when the 150th Anniversary is celebrated, how many more Vice-Presidents, ministers of state, chiefs of defence staff, vice-chancellors, government statisticians, medical doctors, lawyers, etc, would have emerged not from Methodist school alone but all public schools in Winneba put together?

Oheneba Akyeampong is a retired lecturer. E-mail: This email address is being protected from spambots. You need JavaScript enabled to view it.