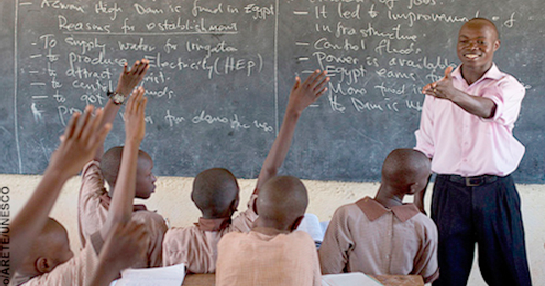 A teacher with his pupils. One needs a licence to teach now. Credits: talis_blog
30.5k Shares

There was a time in this country when the teacher was also the community catechist, the interpreter when foreigners visited the palace, the chief letter writer for the community and, of course, its disciplinarian-in-chief, to whom parents would frogmarch their children for six strong, hot lashes if they misbehaved at home.

Of course, the days of the teacher as a towering pillar of the local community are gone, because with education spreading wider in our communities, the teacher no longer holds sway with a monopoly over who reads the chief’s letters, for instance.

One of the things I find most strange about teaching is that, unlike say law, accounting, medicine, surveying, architecture and others, a person can, without any formal training in pedagogy, literally walk into a classroom and begin to teach, simply because he or she has completed university, or senior high school (SHS) in some instances.

For many, teaching has become a stepping stone to ‘loftier’ things. Clearly, a noble profession, like teaching deserves better.

I believe this was the thinking that went into the teacher licencing aspect of the Education Act of 2008 (Act 778), section 13, which provides for the registration and licencing of teachers by the National Teaching Council (NTC), subject to various conditions.

Section 14 of the Act states that “A person shall not be employed as a teacher in a pre-tertiary educational institution unless that person has been licensed as a teacher by the Council.” The Act, however, was silent on the modalities for licensing.

In 2015, the NTC decided that it would put in place a licensure examination for all teachers, both pre-service and in-service.

That followed the National Democratic Congress (NDC) government’s decision to have section 13 amended to specify passing a licensure examination as the prerequisite for being licenced. The teacher unions strongly disagreed and the matter was put on hold.

Following the change of government, this matter was revisited and eventually it was agreed that only pre-service teachers would write the examination. As things stand, teachers already in service are not required to write the licensure, but are being issued with three-year licences.
They are to undergo Continuous Professional Development (CPD) and meet certain criteria for the renewal of their licences.

A teacher will, therefore, write the licensure examination only once in their lifetime, when he or she seeks to enter the classroom.

The licensure examination covers general numeracy, general literacy and essential professional skills, which is based on the pedagogy learned in school and based on the National Teaching Standards.

Sample questions can be found on the NTC website and just as with other professional examinations, there are no past questions available. Since its inception in 2018, the licensure has witnessed an average pass rate of 73 to 75 per cent, which is good by any standards. A candidate is able to go for as many resits as possible.

The licensure examination is open only to people who have a diploma, a first degree or postgraduate qualifications in education.

Holders of non-education first degrees are, therefore, required to do at least a Postgraduate Diploma in Education to qualify to write the licensure examination.

Simply put, therefore, teaching is no longer a spur-of-the-moment decision while looking for work, as the case has been for a long time.
I think the NTC, under the leadership of its Executive Secretary, Mr. Christian Addai-Poku, is doing a commendable job.

With the licensure examination, the NTC, like other professional regulatory bodies such as the General Legal Council, the Pharmacy Council or the Nurses and Midwives Council, gets to decide who is fit to be a teacher, rather than that fitness being presumed just because one has completed a diploma or degree in education.

That way, the NTC has the power to suspend or even revoke a licence from a teacher, if he or she engages in unacceptable conduct or otherwise fails to meet the standards expected of a teacher. That in turn weeds out the bad nuts and maintains the integrity and robustness of the profession.

Further, if a licenced teacher relocates abroad and wishes to teach, life is made easier because all the prospective employer has to do is to check in with the NTC through its website and conduct a search on the person using his or her Personal Identification Number (PIN).

If the said country recognises the Ghanaian licence, then the person is good to go without the need for an attestation.

Indeed, especially in the private pre-tertiary sector, where many teachers are not professionally trained, a teacher licence will become an important salary bargaining tool, since the schools will not be able to employ just anyone to teach apart from those licenced to do so.

I have noted with some amusement the NDC’s declared intention to abolish the licensure examination if it is elected into government in this year’s election, a position that has been touted by its candidate, Mr John Mahama, on more than one occasion.

Apart from the obvious question of why this supposedly superior method was not put in place in the eight long years they were in power, following the enactment of Act 778 in 2008 and apart from the curious u-turn on the licensure examination issue, I believe the NDC’s option is faulty and is politically induced.

Our Colleges of Education (CoE) have been affiliated to some universities in this country and two main or different curricula are being run by these five universities.

Though such curricula were derived from the National Teacher Education Curriculum Framework (NTECF) for pre-tertiary level, there may be differences in content and pedagogy based on institutional differentiation and peculiarities.

The licensure examination helps to check for mastery or grasp of the minimum knowledge, skills, and competencies of the trainees across curricula and in a way, does serve as a form of quality assurance.

It, therefore, cannot be embedded in the course outline in final year in school if the NTC’s regulatory powers are to have any meaning.

Further, if the NDC says it would abolish the licence examination, what does this mean with respect to the other professions that began writing such examinations long ago?

Will an NDC government abolish these too? Why not? Take nurses, who have to write a licensure examination conducted by the Nurses and Midwives Council after graduating from nursing school, for which they have to pay GH¢600 or so (compared to GH¢220 for the teacher licensure examination) and who have to renew every year, compared to their teaching colleagues, who only have to write it once in their lifetime, when they seek to teach and renew every three years.

Teachers are the pivot around which education revolves. It is, therefore, important that as a nation we get the best that are ‘fit’ to teach, before entrusting our children to them, and they must be held to rigorous standards.

Beyond the academic qualification and college certificate, what skills must a teacher possess? How do we assess our teachers to ensure they have the minimum knowledge and skills that would make them perform well in class?

The one-off teacher licensure examinations, topped up by CPD credits, come in handy as a quality assurance measure to ensure that teachers meet a minimum standard of training and skill sets if we are to improve teacher quality.

Playing politics with this important profession is an expensive joke that ought not to be tolerated.

Rodney Nkrumah-Boateng
E-mail: This email address is being protected from spambots. You need JavaScript enabled to view it.