In the national interest 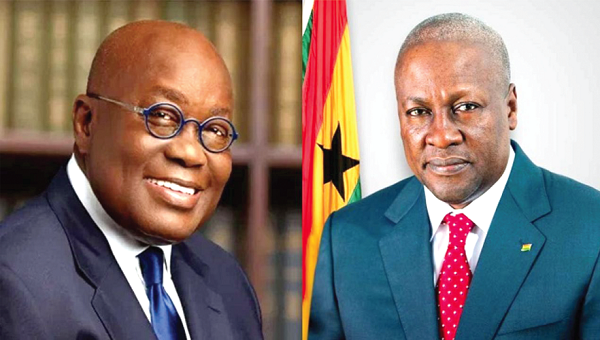 Ghana’s 2020 national and parliamentary elections have been held, but key aspects are disputed. All over Ghana, and even internationally, many Ghanaians are engaged in accusations and counter-accusations regarding aspects of the elections.

Some major international organisations should wade in to help forestall any post-electoral violence; Parliament has resumed its sittings, aware that many among the leadership will never come back to the House.

Election petitions are likely to be filed soon. Parliament is the new battleground. Meantime, there are some loud messages that the Ghanaian voters sent to the leadership class in Ghana, which we hope is not being missed above the din.

The main message from the electorate to the country’s leadership is that it is high time for the national interest to reign supreme, and for parochial interests to be suppressed.

The electors sent a stark message that the time has come in Ghana to build a new national consensus that embraces all political persuasions, in the interest of peaceful nation-building. Ghanaians are telling their leaders that it is time to focus on national priorities of prosperity, growth and development.

This piece offers a constructive statesmanlike outlook for Ghana’s near-term socio-political evolution. It is a time for realpolitik, for compromises, for concessions, for Solomonic wisdom, for the acceptance of realities and for the banishment of the “winner takes all” mindset in our politics.

The decisions of our Electoral Commission (EC), our law courts, our royal palaces, and in the courts of public opinion, should simply be governed by the national interest.

Our President must now work with political opponents in Parliament. They must rethink many outmoded practices.

The voices of moderation, consensus and solution-finding are rising to extinguish those of crude propaganda.

The New Patriotic Party (NPP) needs to come to grips with the hard-cold facts that made it lose a large chunk of its majority in Parliament.

The National Democratic Congress (NDC) should learn faster lessons on why they were denied a triumphant re-entry into the Jubilee House. How did the perceptions or realities of scandals, corruption, poverty and youth unemployment affect the electoral outcomes?

The pattern of voting shows that Ghanaians expressed deep dissatisfaction with the political leadership class and its wanton dissipation of the national wealth.

As former President Jerry Rawlings lies yet unburied, it would seem that his parting lasting legacy to Ghanaians is his oft repeated mantra of integrity, probity, accountability and social justice. The best legacy for President Rawlings is to build the foundations of a New Ghana.

Ghana must quickly re-invent its governance structures and systems. The new government of 2021-2024 must think of “Ghana First” in its appointments, contracting, international negotiations, and other routine acts.

“Friends and Family” must disappear with immediate effect from the appointments in the new government. All such highly qualified members of the current administration should do the President a favour and not seek any public reappointments.

They get private sector employment as do 90 per cent of Ghanaians. A president surrounded by family and friends lacks the ability to conduct a transparent, accountable and integrity-guided leadership.

The President should change his mindset immediately to arrest the rampant ‘white-washing’ of the numerous cases of alleged crimes and scandals that has dogged his government.

The President must reduce the size of his government and focus on waste cutting. Critical governance institutions, such as the Public Accounts Committee of Parliament must be given sharper teeth. Mr Daniel Yaw Domelevo must be recalled from his enforced leave.

The Office of Special Prosecution should be encouraged to do more against corruption.

Most of our religious leaders, traditional rulers and civil society organisations (CSOs) have more to do to hold up our national ethos.

The government must find renewed strength and commitment to finish all abandoned projects. The Komenda Sugar Factory must be made to work and contribute to Ghana’s self-sufficiency in sugar.

The excessive borrowing must be sharply reduced. Ghanaians are not willing to inherit a national debt which imposes a per capita debt of GH¢10,000 per person, including each newborn baby.

The next administration must explore innovative non-debt financing, Ghana needs to revisit the role of a Foreign Transactions Review Committee to misdeeds such as the Woyome, Kelni GVG, PDS, EGYAPA, and others.

The President should grant amnesties to all radio and TV stations that were closed down. Ghana should invite eminent Africans to work alongside Ghanaians to update and amend the Constitution, just as Kofi Annan did for Kenyans, to reform and strengthen our electoral regime.

In conclusion, Ghana needs a new outlook in political and economic framework, and this can only be achieved through building a national consensus, and a new sense of direction that has a focus on the development of Ghana, under a new type of leader. Leaving no one behind.

We must do this now urgently or slide further into an abyss.

The writer is a former Minister of Trade and Industry