Helping Henry: In the beginning was the word 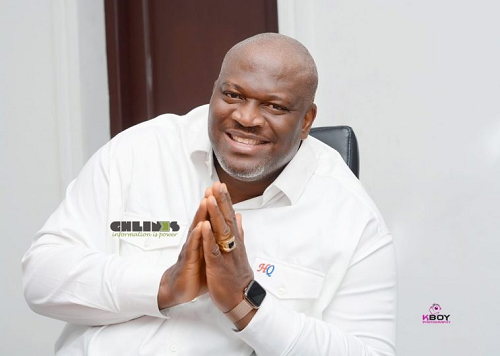 As soon as he got nominated and confirmed, Regional Minister, Henry Quartey, Member of Parliament (MP) for Ayawaso Central, went to work to seek change for his region.

He chose "Let's Make Greater Accra Work" as his motivation theme statement. And since then, he hasn't looked back doing what he believes will help make Accra work.

Henry has gone about this by clearing the streets as much as he can of unorganised hawkers, irresponsible pedestrians and ill-placed traders and trading posts.

He has cleared Agbogbloshie of scrap dealers and onion sellers, something the area became infamous for because of the depth of their disorganisation, not their craft.

This project is a work in progress. It cannot be done in a matter of days or weeks or a few months. This is work that must be maintained for the rest of Accra’s life. He is doing his bit.

For this effort alone, Henry’s constituents must be proud of him and must endorse his efforts. He is worthy of commendation.
He has done what many before him could not do for various reasons.

President Nana Akufo-Addo must be commended for deciding to give Henry the freehand. One can only imagine the political will that has to be mustered to do this as people tend to draw propaganda from these actions.

After all, this sweeping action has and will continue to affect many people across all political divides and persuasions, but to help Henry and make this work, we must remember we are Ghanaians first. This is for us. Greater Accra houses our national capital.

Our capital must lead in changing our image. For those of us in communication, image is everything. As a nation we must begin to recognise that. We must stop portraying ourselves as lawless, filthy and uncultured.

Accra bears our image. We must change it. Henry is helping us do that.

The interest in conversations to help Henry finds inspiration in a word he has used in the rallying call - "let's."

There are many people and various sectors of government and governance who are clearly failing to help "... make Greater Accra work".

For some of us, it is a clear show of irresponsibility, particularly for those in the public sector who are not busily taking up their responsibility.

They must be held responsible! Personnel up and down the ladder, Henry has created an opening for you to prove your worth!

We must first clarify why the word "let's" is so significant and inspirational in Henry's clean-up campaign context. “Let us" exposes us to the fact that Henry aptly accepts that he is not the "all-do-all" who can single-handedly rally Accra into cleanliness and orderliness.

He knows he must get support from all sectors. And he must do so by inviting all and sundry. We must all buy into that. His public statements have confirmed he has taken some of these actions.

Prior to even starting, he consulted with previous leaders of the same space, political leaders across the divide, traditional leaders and his own bureaucracy. Consultation for consensus has been his hallmark for success. He is commended for that.

Who are the “us” who should be seen as active players in ensuring this Henry project works?

Some of the "us" are required by law and by the nature of their work to lead in this campaign.

I refer to all the public and civil service sector workers: The local assembly chief executives, the members of parliament, the police, the lands department, Parks and Gardens, assembly members, street wardens, sanitation department and so on.

And this is just the list I can recall as I write. They do not have a choice in the matter and must be called out to play their part in ensuring this works for the long term.

This is what they are paid to do. We must get our money’s worth! We are getting it from Henry! What about you?

There is also the group that must find itself responsible by virtue of their access, calling, and civic duty. Traditional authority, churches, mosques, media, schools.

Their leadership role in moulding society and assisting in our development and growth requires that they take up a serious recognisable role in this campaign over the long haul.

Their involvement should not be a fanciful fashion-oriented response that would fade with the passing weeks.

They are part of our cultural formation. Their inaction in the past has not been helpful. Henry has taken the lead. They should take advantage and help him help us!

Then there is the group that must hold themselves responsible for ensuring that this becomes our culture, the culture of "letting us make Accra work" always. The first is Joe Public.

Then community leaders, religious bodies, adults, parents. We do not have a choice. We cry for leadership to work in Accra.
Henry has provided that leadership. We must follow and obey and work with him for our own good.

We cannot sit back and watch him waiting to see if he succeeds. We the people create the filth, the disorder and the lawlessness; we Joe Public!

We the people bribe the police, sanitation officers and hold no one responsible when we should. Let’s help Henry help us change our beloved Accra for the better.

Why have all these bodies or groupings not stepped up to formally and publicly endorse what Henry has been doing? And why are they not showing support by taking advantage of their space to reorient “Accrarians”. Imagine when all cooperate.

Imagine if after the launch of the campaign by the Minister, the Regional Police Commander were seen and heard, on television and radio, meeting with all their District Commanders and deliberating on how they would instill discipline in society by enforcing the law in order for Accra to work.

This would also mean the Chief Justice would have to provide quick support by creating misdemeanor courts that would not take more than a day to apply the law. That would help Henry and us!

Imagine if the Parks and Gardens Accra office took advantage of this campaign by Henry and collaborated with the sanitation department of each local assembly and the various community heads and organisations to plant flowers and other plants to beautify Accra.

Imagine if every street corner had waste bins and households were made to ensure they had waste bins. Imagine that citizens made sure no one stole them.

Imagine if all the 36 MPs of Greater Accra, regardless of party, were seen and heard, on almost a weekly basis, inspecting one area or the other in their constituencies, throwing moral challenges to the public to keep Accra clean and sane in support of Henry’s work.

Imagine if all the members of the 29 assemblies did same. We would be well on our way to helping Henry help us change overnight!

It is interesting that the media seems to only have made passing comments when an action is taken but does nothing to get "Accrarians" involved in continuous awareness of the need to sustain the campaign.

Imagine if they, the media of Ghana, launched a support campaign to help Henry.

Imagine if church and mosque leaders preached the subject of "us" at almost every event they organise to get congregants involved.
Imagine if they preached responsibility and challenged “Accrarians” to discipline and lawfulness.

Imagine if they preached a culture of cleanliness, honesty, timeliness, true honour, asking for collaboration and promoting citizenship responsibility. Support for Henry would be godly.

We must begin to hold ourselves responsible as citizens and want something good for ourselves.

We must want to make cleanliness our culture again.

We must want to make law and order our culture again.

We must desire beauty for our collective selves as ‘Accrarians’.

The writer is a Communication Consultant/Activist
E-mail: This email address is being protected from spambots. You need JavaScript enabled to view it.