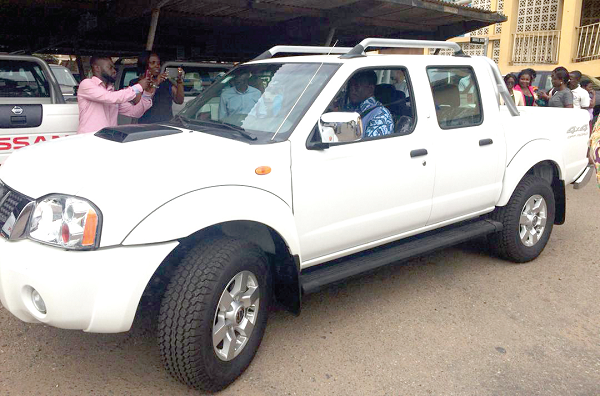 Before I settle on my issue for the day, I beg to ask the President: Has Adwoa Safo been receiving her salary all these months she’s been off her desk?

If yes, why? I will never get an answer.

Now, to my beef for the day.

On Tuesday, while caught in jammed traffic in Accra, worried by how much fuel I was burning, how late I was running for an appointment and the waste of man-hours, many motorists in the annoyingly and painfully snailing traffic suddenly found themselves having to create a path (as we obediently and faithfully do every day) for one 4x4 vehicle with sirens blaring and its strobe lights on.

It was a state functionary. I had no problem with that; as far as I knew, state officials on urgent duties are given the right of way everywhere in the world. A friend in my car, however, was puffing and blowing. “Where at all are they going?” he demanded.

“It doesn’t matter,” I insisted. “They are on state duties”

Then, suddenly, for the first time in my life as a citizen of Ghana, I began to wonder.

The occupants of the state vehicle were on the way to the airport, obviously to catch a flight.

I was, and still am, not bothered whether they flew royal, first-class or business, or whether they would be accommodated in five or seven-star facilities, but I couldn’t help wondering: is the economy of Ghana benefiting from these many official trips?

Only the previous night, one of the television stations presented a news item in which watermelon farmers stood by their produce wailing and wringing their hands. There are no buyers, so the market “queens” pay them one-tenth the price at which they buy at the farm gate. An extreme close-up revealed piled up watermelons rotting away.

I won’t bore readers with a recap of what goes on in village schools and the colour of the water the people are compelled to drink from rivers which are nowhere near Galamsey mining concessions.

Is that all that Ghana gets from these give-way-to VVIP vehicles, first/business class plane rides and US$20,000.00 per diems?

The most fruitful outcome of these trips - the best result for Ghana, so far - has been one: more loans.

No wonder the UK has the temerity to invite Ghanaian MPs to the House of Commons to discuss the bill on LGBTQI currently before Ghana’s Parliament.

That may not be shocking. What is shocking is that Ghana’s Parliament complied.

Why House of Commons? Does the Parliament of Ghana invite British MPs to discuss why there are Britons who copulate with dogs?

It can all be traced to a badly mismanaged economy that sends us flying first-class to go begging for loans and grants, after which we follow up with requests for forgiveness of debts under HIPC.

As of 2021, the youth unemployment rate stood at 19.7 per cent from an average turn-out of 109,000 youths from tertiary institutions each year.

We have upgraded polytechnics into universities, conferring degrees instead of HND. They graduate and join the queue for government jobs, even clerical jobs!

As far back in time as we can remember, government officials have been inspecting rice farms that have depended on rainwater. Acheampong built us dams from which we started producing enough, even for exports. And Acheampong was only a commercial school leaver! No university degrees; no, not even first degree.

Acheampong was overthrown and since then, we’ve had Ministers with PhDs and double Master’s importing food crops from Sahelian countries.

Yet every flight that leaves Kotoka Airport has a government minister on board destined for (mostly) western Europe and North America for conferences and workshops.

Is it to continue with the economic mess that there is burning of party offices, press conferences called by cheated or disgruntled party executive contestants?

Soon it will be the turn of the National Democratic Congress (NDC).

What do all these people want power for?

Meanwhile, our research institutions have no money to conduct research for which the researchers are faithfully paid their salaries every month.

So soon, the raving and ranting over Togbe Afede’s GH¢365,000.00 refund of his Council of State ex gratia have ended.

The consensus last week was that this democracy is fattening only a few and, therefore, there must be an amendment to the 1992 Constitution.

My fear is that the Constitution will never be amended.

A small group of people should take that decision, but they are the ones who stand to be most affected in status by any revision.
Who wants to be deprived of GH¢365,000.00 if they can prevent it?

The writer is Executive Director, Centre for Communication and Culture. E- mail: This email address is being protected from spambots. You need JavaScript enabled to view it.