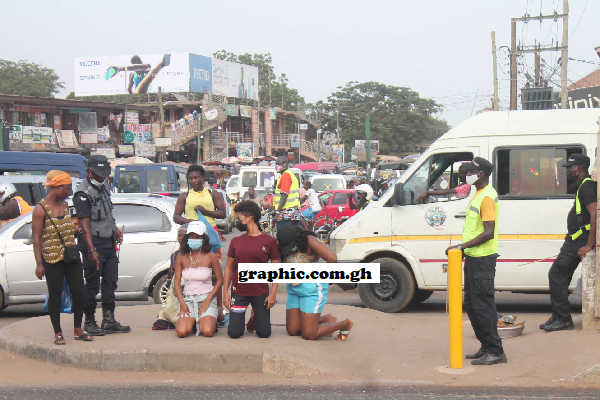 Between 2017 and 2018, I lived near Oyibi on the Adenta-Dodowa road in Accra. Every evening on my way home, I had to endure the chaos at the Madina Zongo Junction, one of the most notorious traffic bottlenecks in the city. The indiscipline of drivers coupled with the lack of footbridges along the dual carriageway simply was intolerable and pedestrians had to risk life and limb to saunter across to the other side.

It was, therefore, a huge relief when after some very vocal advocacy, a number of footbridges were completed to make it safer for pedestrians to cross the highway. Then it all hit a snag when it became clear that for whatever reason, pedestrians were refusing to use these footbridges that had been put there for their own safety. Rightly there were calls for the authorities to ensure people did the right thing.

I have been uncomfortable with the photographs I have seen on social media over the weekend of taskforce personnel subjecting people to all manner of physical punishment for supposedly refusing to cross the highway at the right places. Some were made to kneel down, others were made to sweep, pick litter or squat. Quite a number of people have been cheering the taskforce on and berating the indiscipline of those caught in the net, even though I am sure many of them regularly engage in some act of traffic indiscipline, whether it is driving on the hard shoulder, littering or doing illegal u-turns, among others. From their safe berths behind their phones or computers, they find it convenient to dish sanctimonious invectives at those who happened to have been caught in the act. Some have even climbed the footbridges to enjoy the populist spectacle of their fellow citizens being humiliated publicly. John Chapter 8 verse 7 readily comes to mind.

The first point of my discomfort stems from memories of the infamous Holy Gardens incident back in the days of the Rawlings ‘revolution’. The late Warrant Officer Salifu Amankwah, a retired soldier of the Airborne Force, headed the Kwame Nkrumah Circle Sanitation TaskForce for which he gained notoriety for his ruthless methods in dealing with littering and other ‘offences’. Even spitting could attract his team’s ire. Of course, the place looked squeaky clean because everyone passed through in absolute terror. Then one day, an elderly man was brutalized for littering and he died in the process. In the public uproar that followed, the force was disbanded.

Some might argue that this was only an isolated incident, but then I wonder if they would argue same if the man was their relative. One might also argue that the tenor of the regime at Holy Gardens is far different from today’s era of democracy. But what if one day a person is asked to kneel or squat for failing to use the footbridge, and in an argument with one of the enforcers, he or she is pushed, falls, hits his or her head on a rock and then dies? What then? Will we praise or condemn the taskforce? Too far-fetched? Well, therein lies the proverbial slippery slope.

This brings me to my second point of discomfort, which is the resort to lawlessness in a bid to contain lawlessness. Article 19(11) of our Constitution is clear. “No person shall be convicted of a criminal offence unless the offence is defined and the penalty for it is prescribed in a written law.” But whilst the Road Traffic Regulations, 2012, Regulation 154(3) states clearly that pedestrians who fail to use a footbridge or an underpass commit an offence, I am yet to see sweeping, kneeling or squatting defined in law as punishments that may be dished out. To my mind, therefore, it is wrong, as a matter of law, for law enforcers to compel same. Why should we encourage or tolerate lawlessness in the name of preventing lawlessness?

How do we justify law enforcers dreaming up their own punishment as they see fit? How can we be sure such unfettered powers will not be abused? Some time ago, police officers around the 37 Military Hospital were said to march law-breaking commercial drivers to the hospital mortuary to compel them to wash corpses as their punishment. Are we really comfortable giving law enforcers such wide, sweeping powers?

Sadly, many of us see the enforcing of discipline as tantamount to physical punishment. Many of us celebrate the police giving hot, ‘talk true’ slaps to criminal suspects to force the truth out of them. We claim, almost proudly, that ‘as for Ghanaians, unless you apply physical force, they will not behave themselves’, as if we are a flock of sheep.

Somehow, as part of our collective political DNA, we seem hardwired to violence and approve of same as the way forward for our authorities to get a grip on the system. I remember the chants of ‘JJ, do something before you die!!’ and ‘let the blood flow’ when Rawlings burst on the political scene decades ago. We snort at human rights, due process and rule of law in derision as some sort of intellectual ‘coat coat’ luxury talk when it suits us. But democracy comes as a package, inconvenient warts and all, not a pick-and-choose box of chocolates.

Instead of going quasi-military and dishing out crude punishments when citizens break the rules, would it not be a wonderful thing if the authorities actually sat down and devised a way to monetise indiscipline, especially since this is clearly a localised nine-day wonder and no more?

Indiscipline is part of every society’s baseline. People exceed speed limits, jaywalk, jump lights and evade bus and train fares all the time elsewhere in the world. But what serious countries do is make it very expensive to indulge in these, and in the process rake in revenue for the Exchequer. Fortunately, we do not need to reinvent the wheel to hit recalcitrant citizens where it hurts most-their pockets.

In any case, why not make it physically impossible to scale the median on the Adenta highway in the first place?

Rodney Nkrumah-Boateng,
E-mail: This email address is being protected from spambots. You need JavaScript enabled to view it.