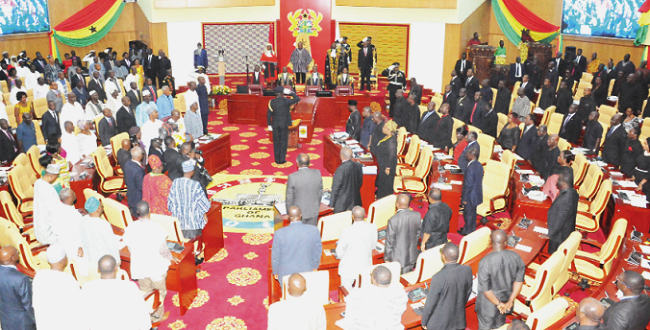 Parliament is the bedrock of any democracy, because it facilitates participation of citizens in the governance process through their elected representatives. In addition to making laws, Parliament plays an important role in gauging, collating and presenting the views and needs of the people.

Further, it articulates citizens’ expectations and aspirations in putting these into national development agenda.

It also helps identify problems and policy challenges that require attention. Parliaments all over the world, including Ghana’s Parliament are making use of new digital technologies in order to serve their constituencies better resulting in what is termed, e-Parliament.

e- Parliament can simply be defined as the use of information and communication technologies to improve parliamentary internal processes and the facilitation of a two-way interaction with constituents.

Evidentially, information technologies can support all key functions of Parliament, including debating issues of national development (deliberative), checking and approving government spending (budget/taxes), monitoring and tracking the work of the executive arm (oversight).

There are a number of ICT applications that can be used by Parliament to support the day-to-day activities of members such as management of bills, plenary and committee documents, and scheduling, among others. On a second level, Parliament can use new digital technologies in interactions with citizens, providing information and documents, including Hansard online (http://www.parliament.gh/publications/30), providing feedback to citizens about ongoing work, seeking citizen’s input in the legislative process, holding the executive arm of government accountable through citizen’s feedback provision on projects within communities. Thirdly, new digital technologies, especially mobile, can help Members of Parliament (MPs) educate citizens on the role of Parliament so that they can interact better with them.

Since MPs are not always in Parliament, using cloud computing will give them access to parliamentary resources online.  This means members can spend more time in their constituencies from where they can access and work remotely on relevant documents in Parliament. To enable the Parliament of Ghana to engage with citizens on an on-going basis, Penplusbytes, an NGO, implemented “Connecting Citizens to Parliament” www.assurances.gov.gh, which deployed a two-way communication system between citizens and Parliament of Ghana via an online portal for citizen engagement; social media tools, SMS, WhatsApp and mobile apps as well as offline face-to-face engagement through the use of community radio.

Currently, Parliament of Ghana is also rolling out "e-Parliamentary System", which is expected to transform how the House performs its business. This project is to empower MPs to file queries online and set up a speedy and paperless flow of information between Parliament and the executive arm of government. The system will also digitise Parliament’s Library and increase the ability of MPs with proper authorisation to access the Parliament’s intranet (private network) from remote locations. Currently, the “e-payment system offers uploading Parliament’s order papers, voting, procedures and business papers, which parliamentarians can access via installed monitors in the chamber. Also Parliament of Ghana is using Mobile App (https://play.google.com/store/apps/details?id=net.touchnetgh.pmw&hl=en) which provides information about Parliament’s work, order paper, votes and bills before the House and procedures.

e-Parliament is based on an assumption that all citizens have access to new digital technologies which will enable them effectively interact with their MPs, but this is far from the case. Most parts of Ghana still do not have reliable internet services, so the argument is true that by pushing Parliament to use technology fully, some citizens may be left behind.

Furthermore, some members even when they are provided with laptops, may not have the technical knowledge to utilise them fully in their work. Parliamentary support staff are not only inadequate in number but some of them lack the experience with technology required to implement the e-parliament project successfully. Also the library in Parliament is not equipped with a full complement of technological tools to enable them provide reliable services to members. Furthermore, Parliament does not have the independent budget to invest in some of these new digital technologies, coupled with the fact that they are not able to hire some key ICT professionals.

Citizens’ lack of understanding of the legislative process is also a key challenge in ensuring better dialogue between citizens and MPs. This challenge means a citizen may send a request for money to MPs to pay a ward’s school fees instead of asking a question pertaining to key functions of Parliament such as the progress of a bill or Legislative Instrument.

In conclusion, new digital technologies, especially mobile phones are transforming Ghana’s legislature into a modern and relevant institution, which is in tune with advancement in the new digital age. ICT is, therefore, making Parliaments’ commitment to transparency, accessibility and accountability a reality. This is being accomplished by bringing Parliament closer to citizens, increasing genuine dialogue with citizens and improving internal work processes of lawmakers in a manner consistent with the promotion of citizens’ participation in a fledgling democracy.

The writer is the Executive Director of Penplusbytes.org - you can reach him at This email address is being protected from spambots. You need JavaScript enabled to view it. or WhatsApp : 0241995737