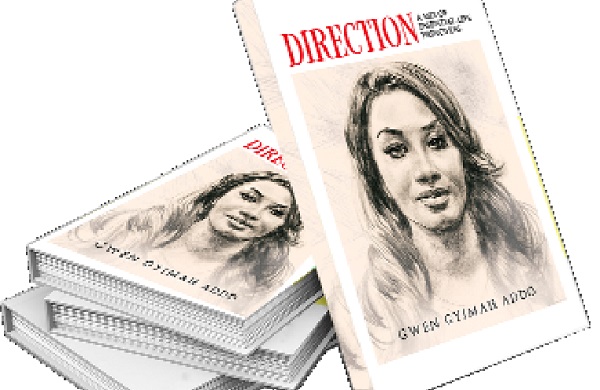 If this book has preached to me, the sermon is that I judge not a book by its cover, both literally and figuratively. Going by the book’s cover, and the profession of the author, my judgement was, “what good can come out of a book written by someone who sells hair?”

Halfway through my read, shock took hold of me. I have read ‘Direction’ twice over and I am still in shock.

As a source of direction for life, the book reads like a 21st-century continuation of the Book of Proverbs, offering an alternative path to success with nuggets of wisdom, and Gwen Gyimah Addo’s directions are to be followed like a doctor’s prescription – one three times a day - because she has the advantage of one who once hit rock bottom and bounced back.

A soul that once looked for salvation in people and places where the high and famous walked, now beckons the world towards Christ and is spreading the aroma of the knowledge of Him in the unlikeliest of places – on Instagram.

From the bright stage lights of a Miss Malaika beauty pageant, where she walked off stage in total humiliation, to the forecourt of the National Theatre, where she once retailed music cassettes from table-tops, this author has suffered the hard knocks of business, but now walks the world stage, totally transformed through scholarship and faith in God.

From this advantage, she addresses young men and women who, today, like her inglorious past, feel defeated.

To those who are looking for babysitting sessions with breastfeeding bottles in their mouths, Gwen is blunt. “You are not broke: you are lazy,” she tells them, counselling them away from the trap of pity parties and self-condemnation. To the lazy and mediocre, who are want to be seen as humble, she is at pains to point out that “humility is not a Christian virtue”.

This is Gwen re-loaded

I like this book and I will put it in the hands of every student, from Senior High School (SHS) through tertiary, as well as people out of school and who are struggling with life. More appropriately, the text is a trifle above freestyle Instagram language.

‘Direction’ is not an autobiography, but it has enough to reveal the inside of the author. A Philosophy graduate from Legon, Gwen worked as a banker for some time and took an Executive Master of Business Administration (MBA) from the China Europe International Business School (CEIBS). In-between, she has received the hard knocks of life, gone under, but re-surfaced.

Knowing the heights that she has attained today, Gwen’s story is almost a copy of Cinderella. As she reveals in the Introduction, “I was a very timid girl and I was always afraid of being judged by others and feared criticism, so hiding behind those pages was safe in the beginning, but I still controlled what I wrote because I was afraid of what others would say.”

The birth of Instagram gave her the boldness. She started her personal page, ‘@gwen_addo’. By the reactions from around the world, she knew she had “?nally found an empty canvas where I could explore my brush strokes.”

That was when the dream for ‘Direction’ began to crystallise. “I knew I had to tell the world about this story, and to also encourage other young women and men who felt defeated by this digital social media world to stop pity-partying and wake up to God's reality.”

Does the book succeed? If it was written to convince young persons starting life, or adults who need an assurance that they can bounce back and resume turning the pages of life, then ‘Direction’ is a success. ‘Direction’ may convince you to turn back to God. If it does, it has succeeded.