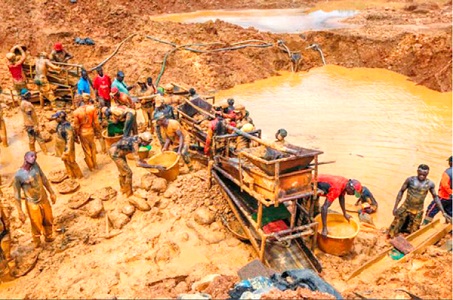 The return of Aisha Huang and matters arising thereof have reignited the discussions and debates on the menace posed by illegal small-scale mining (galamsey) activities in Ghana and the urgent need to tackle this phenomenon head-on before we destroy our very existence and survival as a nation.

Apart from the massive destruction of arable farmlands, cocoa farms, forests and water bodies brought about by galamsey activities, experts warn that if nothing is done quickly to halt galamsey operations, the time is fast approaching when Ghana would no longer be able to treat her water bodies for human consumption and may then have to import potable water; a grim possibility which we dismiss only at our own peril.

Why we have failed in fight

Since 2017, when the ruling New Patriotic Party (NPP) assumed power till now, “much” has been said and “done” in the efforts to halt galamsey. Yet, the return of Aisha Huang has revealed that not much has been achieved.

Rather, we have failed woefully in our efforts to deal with the threat posed by galamsey despite all the workshops, talkshops and committees and taskforces set up to deal with that phenomenon. The question then is, Why have we failed? My response is simply that we lack moral credibility in our crusade against galamsey.


Unfortunately, thus far, the messengers of the galamsey message, in particular the two leading parties in Ghana, namely, the National Democratic Congress (NDC) and the New Patriotic Party (NPP), but also other stakeholders have all proved themselves not credible in the galamsey fight.

Firstly, regarding NDC, it was reportedly during their time, especially between 2012 and 2016, that Chinese nationals took over our forests and river bodies to prospect for gold without any reservations.

In his 2020 election campaign, the party’s leader and flag bearer, ex-President John D. Mahama, stated that when he won power, he would give moratorium for illegal small-scale miners to mine because “the land is ours”.

This position, which was obviously for political reasons, shows that that party has no credibility whatsoever to fight the galamsey menace when it is voted back to power.

Secondly, the ruling NPP had the best opportunity to nip this canker in the bud when the sitting President, Nana Akufo Addo, used the first three of his major speeches to talk about halting galamsey in Ghana, going ahead to put his presidency on the line to stop it and setting up an Inter-Ministerial Committee to pursue this avowed intention.

And what happened next? Various reports showed that over 500 excavators which were seized from illegal miners went missing never to be found.

The Anas Aremeyaw Anas exposé of the committee’s work published in various media outlets in February 2019 also showed the latter to be susceptible to corruption and bribery, while the committee’s leader was heard saying at one time that “party no hia sika” (to wit, “the party needs money”). That party, the ruling NPP, has since lost its credibility in the fight against galamsey in Ghana.

Other stakeholders such as the taskforce made up of armed forces and police sent to deal with the phenomenon have been seen in some reports giving protection to people engaged in galamsey activities while some traditional authorities who are custodians of the lands on behalf of their people have also been portrayed as themselves complicit in illegal small-scale mining activities across Ghana.

On the religious front too, methinks that we are failing the credibility test because if most Ghanaians profess to be religious (71 per cent Christians, 17 per cent Muslims, 5 per cent ATR), and all these religions view the land as sacred and humans as stewards, then our wanton destruction of the land through galamsey only shows our failure in appreciating that ecological care is an essential part of our religions. Our religious profession cannot be incommensurable with praxis and galamsey only exposes us.

As of today, I daresay that the one institution that has proved itself credible in our war against the galamsey threat is the media whose members have relentlessly pursued and kept the issue of galamsey on the front-burner all the while risking their lives in reporting on the activities of illegal miners across Ghana.

In Ghana’s galamsey war today, my position is that moral credibility is the missing link, and without it, we will continue to remain where we are, talking and “doing” plenty but achieving nothing or very little, if anything at all.