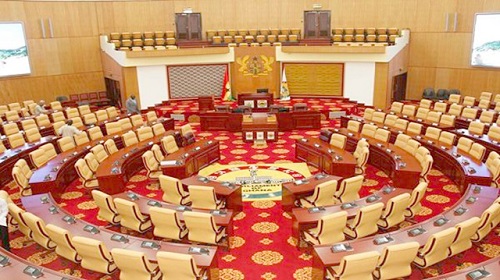 “Our MPs should understand they were voted into Parliament to do business of the people since they are not representing themselves.

“It is important we get it clear for them to understand it is their duty to always be there unless they are in their constituencies dealing with other issues, but not showing up just because they do not feel like it.” – Professor David Abdulai, Senior Advisor, Africa Parliamentarians Network against Corruption.

The Speaker of Parliament and members are invited to read and comment on this article, in the interest of the public.

One. Is it true or false that when bills are submitted to Parliament, the organisations requesting the passage of a specific bill must add money to be shared among committee members before they discuss the bill, otherwise, no show?

Two. When Parliamentarians absent themselves from sittings, what is done to them?

Three. Is it right or wrong for persons to be elected to Parliament, and for them to treat Parliament as an additional money-making enterprise, while they pursue their own business? Do they serve the nation or not?

Five. Is it shameful or not for Parliamentarians to be present in Parliament without contributing to debates, because they do not fully understand the issues being debated, and neither could they express themselves in the official English language?

Six. Is it right or wrong for Parliament to unilaterally decide how much they must be paid, or the quantum of allowances to be given them, without regard to prevailing national conditions of other Ghanaians? And, is there no other entity to moderate what Parliamentarians fix for themselves?

Seven. Would Parliamentarians admit or deny that Ghana’s Parliament has had no impact whatsoever on the deteriorating environment of filth and neglect spreading throughout the country, regardless of the government of the day?

Ghana’s democratic and parliamentary governance had a new life in 1992, with our present Constitution.

No doubt several laws have been enacted through the work of Parliament, and that have provided the impetus for whatever good is derivable from those laws.

The matter of interest to me as a Ghanaian is what I perceive as a selfish, acquisitive intent to make money in Parliament, rather than the altruistic intent of serving the people to better their lot. In other words, Parliament is losing the quintessence of its existence in the context of national development.

According to a news item in the Ghanaian Times of Friday, March 18, 2022, lack of quorum in Parliament on March 17, 2022, and March 10, 2020, disabled members from debating and approving two different credits from the German Government for various projects in the country.

Altogether, the two facilities are worth 50 million.

Without a quorum, the work of Parliament is stultified. Article 102 of the Constitution states: A quorum of Parliament, apart from the person presiding, shall be one-third for all Members of Parliament.

Sometimes, when we watch proceedings in Parliament, we see an almost empty house. Where have the members gone to? Are they on a “frolic of their own”? If so, must this be allowed to continue? I say nay. Ghanaians must call their members to order! The Speaker of Parliament is also helpless.

Professor David Abdulai, Senior Advisor, Africa Parliamentarians Network against Corruption, has advocated the use of a biometric attendance system in Parliament to curb absenteeism by legislators.

The House must go beyond that and discuss and prescribe the discipline to be enforced against absentee members.

It appears parliamentarians see themselves as above the laws of the nation and think they are answerable to no one. We have to remind Members of Parliament (MPs) that the power with which they entered Parliament is not native to them, but a borrowed power!

The power is adventitious. When it pleases us to remove it, they would fall back to where they were before they entered Parliament.

Parliamentary democracy places the citizenry in a position to impact the outcomes of debates. If parliamentarians won’t inform their constituencies of happenings in Parliament, at least, those who know what is going on could make contributions through articles, while professional organisations and NGOs also state their opinions.

Some are that he must be 21 years and above, be a resident of the constituency, must not be a criminal, and so on.

My opinion is that since Parliament exists to make laws and discuss policies of the government, those elected into Parliament must, at least, have university education, and should be mature enough to know the work of Parliament.

Age 35 to 40 is good enough, not less. It is a waste of money for members to be in Parliament without understanding issues and being able to express themselves in the official English language.

This article is to make Ghanaians aware that we must all be vigilant in promoting and securing the best interests of our nation. Ghanaians must be aggressive in evaluating the work of Parliament. The notion of some parliamentarians that they are superior to the electorate must be disabused. We must keep them on their toes, and let them know their power comes from us!