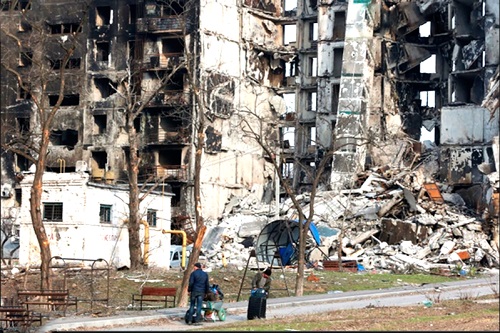 May 9 is Victory Day in Russia, commemorating the triumph over Nazi Germany in the Second World War – the most brutal and bloody war in human history.

It was the Soviet Union, the predecessor nation to Russia, which suffered the brunt of this war and made the single most significant contribution to the victory over Nazi Germany.

For us in Africa, the significance of this victory is that it helped to accelerate the process of decolonisation.

It also averted Hitler’s evil agenda of a new world order to be partly defined by his sinister eugenics programme, which would have ensured the almost total elimination of the African people as a race.

On June 22, 1941, Germany invaded the Soviet Union after tearing to shreds a nonaggression pact the two countries had signed in 1939.

Operation Barbarossa, as the invasion was codenamed, deployed over three million German troops and rapidly advanced deeply into Soviet territory, coming to within 18 kilometres of Moscow. The fate of the world hinged on the success or failure of Soviet resistance, but little help came from outside.

Abandoned to its fate, and with the odds weighing heavily against it, the Soviet Red Army managed to defeat the German army in the Battle of Moscow.

For the first time in the war, the mighty German war machine had been stopped. The Red Army followed this up with a stunning victory at Stalingrad, now Volgograd, annihilating the hundred-thousand strong German Sixth Army and capturing 20 German generals.

Historians are unanimous in their opinion that this was what turned the tide of the Second World War.

By the time the West belatedly opened a second front with the Normandy beach landings in June 1944, the Red Army was single-handedly engaging more than 200 German divisions, while the Americans and British together rarely confronted more than 10.

The then British Prime Minister, Winston Churchill, was honest to admit that it was “the Red Army that tore the guts out of the German military machine.”
Germany lost over six million men in its battles with the Red Army and approximately one million on the western front.

The Soviet Union lost 27 million people in that war.

This traumatic experience has continued to define the Russian national psyche, and Russians are very sensitive to any hostile military developments especially on its western border.

Unfortunately, the West’s triumphalist euphoria following the collapse of the Soviet Union blinded it to the history of the suffering of the Russian people.

Instead of reorganising the North Atlantic Treaty Organisation (NATO) into a new security architecture which would take into account the interests of all previous adversaries, it rather embarked on an ambitious expansion programme inching closer and closer to the Russian border.

The intention has been to encircle Russia militarily and neutralise it as a potential geopolitical rival.

President Putin, however, made it clear that Ukraine is a redline, and that Russia will under no circumstance allow NATO to have a nuclear foothold at Russia’s doorstep.

But NATO was adamant. And as Pope Francis said recently, “the barking of NATO at Russia’s door” was what triggered Russia’s incursion into Ukraine.

NATO’s barking intensified with the American-orchestrated coup against the democratically elected President of Ukraine Victor Yanukovych in 2014, and the installation of a rabidly anti-Russian and pathetically pro-Western political elite dominated by neo-Nazis of the ideological progeny of the notorious Ukrainian Hitler ally, Stepan Bandera.

This group dominates the political and military establishments in Ukraine today, and this is why de-Nazifying the Ukrainian army is one of the objectives of Russia’s military operations.

At the very early stages of the Russian operations, the Ukrainian President, Zelensky, indicated his willingness to accept a peace deal in which Ukraine would declare its neutrality and abandon its ambitions to join NATO.

The British and the Americans pressurised him to abandon this road to peace, and together with NATO have since been pumping large amounts of weapon systems into Ukraine, urging it on to fight to the last Ukrainian.

And as Ukraine is running out of men, and the country is saturated with weapons of doubtful use to the war effort, American arms manufacturers are smiling all the way to the bank.

The West knows very well that this is a war Ukraine has no chance of winning, but the intention is to weaken Russia.

The unprecedented sanctions imposed on it are intended to induce an economic collapse which would trigger a political crisis and eventually bring about regime change.

But contrary to western expectations, the Russian economy has shown remarkable resilience, and President Putin’s approval ratings are above 80 per cent, even according to polls conducted by agencies politically unsympathetic to him.

As the case is, hubris will not allow for a strategic rethinking of policy on the part of the United States and its European vassals, but May 9 should remind them of what happened to those who invaded Russia in 1941.

The writer is with the Islamic University College, Ghana. E-mail: This email address is being protected from spambots. You need JavaScript enabled to view it.