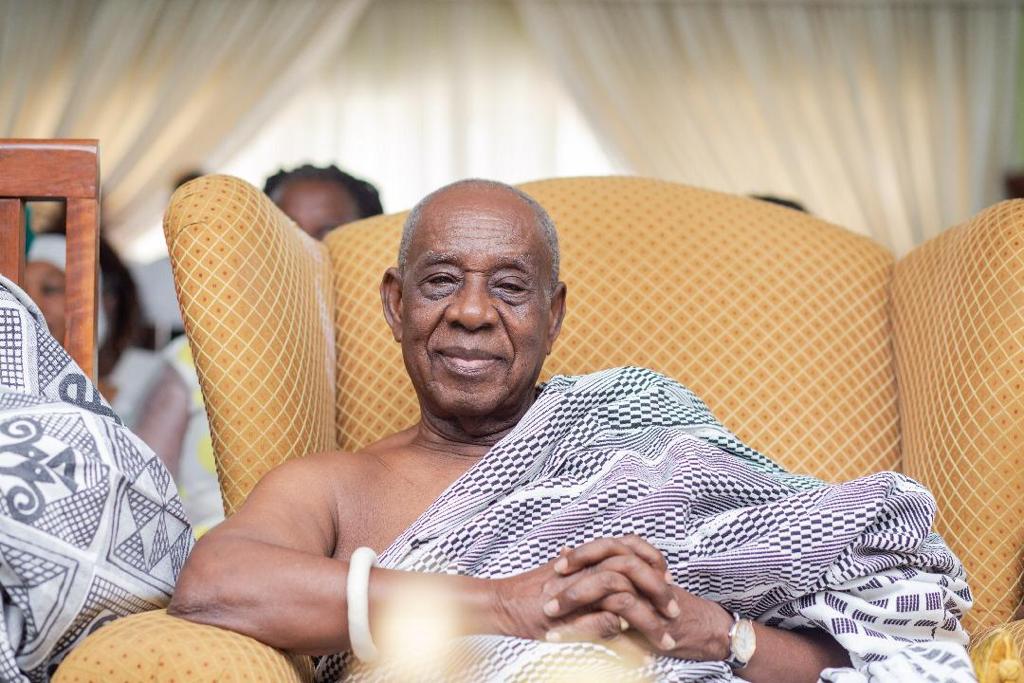 Today is 90 years since the birth of Bafuo Kwabena Gyima Osei-Bonsu, a quintessential Ghanaian statesman.

He has distinguished himself as a legal practitioner, a politician, and a traditional ruler, amongst others.

Bafuo, the handsome looking, intelligent, smartly dressed and courteous man, is distinguished not only for these attributes but also due to his unique principles and philosophy.

In his own words, 'Fairness is essential in life and that if you treat people with due respect, they will also treat you fairly.'

He served in the government of the late Dr Kofi Abrefa Busia during the Second Republic of Ghana from 1969 to 1972.

He held the portfolio of Minister of State and Chief of State Protocol.

Before then, he had served as ministerial secretary for National Security in the same administration.

Bafuo was one of the people in the inner circles of Dr K A Busia.

Before his stint in politics during the Second Republican, Bafuo had been a successful legal practitioner and paid his due in that profession.

He first practised in the Yaanom Chambers in Kumasi with the late Mr N Y B Adade, the Attorney-General in the first Cabinet of the Busia Administration.

Bafuo is noted for many pro bono services he rendered to people he knew needed his services but could not afford the charges.

According to him,  what he considers essential is to be able to do something to save somebody other than oneself. He  philosophises thus, 'I get satisfied when I do something for somebody, and I realise they are happy about my services.'

Bafuo started schooling at the Sunyani Government School in 1939, continued at Bechem Presbyterian School up to Standard Five, and then proceeded to Achimota from form one to form five. Afterwards, he had a stint in teaching in Kumasi.

Consequently, he left Ghana for Europe through the instrumentality of his uncle, the late R.R. Amponsah, one of the veritable stalwarts of the United Party Tradition and who also served in the Busia administration as Minister for Education and Sports.

Although the remuneration for the teaching appointment was relatively small, Bafuo considers that period in his life phenomenal as he acquired skills in managing people and resources.

In Europe, he first settled in Stuttgart, Germany, with his uncle R.R. Amponsah and his wife, Mrs Adelaide Amponsah.

He then proceeded to the United Kingdom, where he studied for a Bachelor of Laws (LLB) degree at Leeds University. Afterwards, he did his Bar from Leeds and was subsequently called to the English Bar.

During his studies in the UK, his uncle R. R Amponsah was incarcerated in Ghana under the infamous Preventive Detention Act (PDA).

Amponsah's detention was a grave matter to Osei-Bonsu as it marked the end of his education funding.

However, he braced the odds and engaged in part-time jobs, including bakery, to complete the course.

As soon as he was called to the English Bar, he returned to Ghana to contribute to his country's development and to explore possible legal avenues to help secure the freedom of his incarcerated uncle and several others who were then wallowing in jail.

Following the 1966 coup d’état, Bafuo was invited to assist in running the new government and was designated as the Commissioner of Information.

However, with time, the military government, led by General Ankrah, dismissed some senior journalists from the state-owned media who had argued against the government agreement with a foreign company that they considered unfavourable to the country.

Bafuo, as the commissioner, expressed disagreement with the government's decision noting that the media practitioners were only expressing their views, which they were entitled to do.

He, therefore, resigned from his position. That remarkable act of Bafuo Kwabena Gyima Osei-Bonsu was rare in Africa.

It became the cornerstone of the entrenchment of media freedom in Ghana but has unfortunately not been deemed good enough even by the media in Ghana to warrant any honours.

I believe that that single act of bravery, principle, and pivotal attempt at promoting media freedom should have earned Bafuo at least a certificate of honour. One wonders if he would have beenspared media bashing had he acted contrary to the promotion of media freedom.

In 1969, following the lifting of the ban on political parties, the people of the Asokwa Constituency in Kumasi invited Bafuo to contest the Parliamentary seat, which he did, on the ticket of the Progress Party (PP) and won.

Out of the total valid votes counted, he secured 10,283. His closest competitor, Cobbina John Francis of the National Alliance of Liberals (NAL), obtained 6450. The third-placed candidate, Joseph Paintsil Sagoe of the People's Action Party (PAP), got 383, whilst Dr John Bilson of the United Nationalist Party (UNP) had 366. Bafuo's massive victory reflected the enormous success of the Progress Party (PP), led by Dr K A Busia, across the country, as it won 105 out of the 140 parliamentary seats.

During the Kufuor Administration (2001 – 2009), Bafuo was the board chair for the Ghana Commercial Bank, a position he characteristically handled with distinction.

He also served in various advisory positions in support of the presidency.

Before his enstoolment, Bafuo was a member of the New Patriotic Party's National Council of Elders. In that capacity, he faithfully applied his accumulated wisdom in politics to promote multiparty democracy in Ghana.

Even at 90, Bafuo continues serving his people and country as the Tufohene of Asante Mampong, a royal advisor, which he considers an honour and a privilege.

As a minister of state, he worked diligently and had no negative records standing in his name.

Between childhood and retirement age is the period of competition, selfishness, struggle, stepping on others' toes and being involved in many things that could defy the human person. During that period, one may lose their innocence.

However, at age 90, we become real human beings again. At 90, all things being equal, one is spiritually more positive. In some cultures, such people become ritual functionaries because they are no more involved in the things that will defy the soul. For that reason, they have a Godly heart. Amongst the Akan of Ghana, it is said that 'Panin ano kyen Suman.'  That is to say, older people are closer to God, and they can bless.

Bafuo Kwabena Gyima Osei-Bonsu has been a blessing to his family, the entire nation, and humanity in general. I salute him and wish him more years of good health and peace.

On this momentous occasion, let us thank the Almighty for the life of Bafuo Osei-Bonsu. Let us also pray for him to remain more robust and healthier to serve and bless the motherland.

The writer is the Executive Director, Busia Institute for Rural and Democratic Development (BIRDD) and PhD Candidate, Institute of African Studies, University of Ghana – Legon.