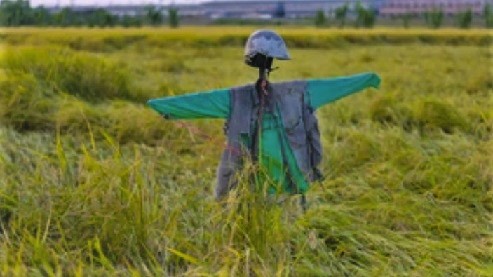 On May/Labour Day, May 1, 2022, TV3 News aired the story of Asutsuare rice farmers employing human-beings as scarecrows to ward off birds from their rice farms. This was in addition to the use of catapults in the “anti-bird” role as we soldiers use special weapons in the anti-tank role.

The mention of Asutsuare brought back memories of my stay in Asutsuare in 1983 training for a peacekeeping mission with the United Nations Interim Force in Lebanon (UNIFIL) before we were relocated to the Border Guards Training Centre, Kpetoe.

Where is Asutsuare? Asutsuare is a town between the Shai Hills and Akuse, in the Shai-Osudoku District of the Greater-Accra Region. It is south of Akuse with the River Volta running along its southwards through Sogakope to Ada into the Atlantic. Its fertile semi-marshy soils were identified in the 1960s not only to be good for rice cultivation, but also for sugar-cane.

Therefore, together with Komenda in 1965, Asutsuare became the hub of sugar-cane production to feed Osagyefo Dr Kwame Nkrumah’s sugar production industrial drive. The factory was designed to crush two thousand (2,000) tons of sugar-cane per day.

However, the coup d’état in February 1966 which overthrew Osagyefo brought to an abrupt end the ambitious plan to develop Asutsuare into a major agricultural hub for rice and sugar-cane production. Since then, small-scale peasant farmers have continued to grow rice.

It is against this backdrop that the programme of rice farmers employing the services of little boys to play the role of scarecrows was aired.

Funny as it sounded hearing the human scarecrows make noise with cans filled with stones, as well as with their voices, that was the reality on TV. It was a rather depressing and dehumanising spectacle.

The farm owner said he paid the human “scarecrows” 20 cedis each per day for 12 hours work from 5.50am- 5.30pm to make noise to drive away birds eating the rice.

The “scarecrows” were also equipped with catapults with which they hurled stones at the thousands of offending birds.

The farmer complained that after all their labour and problems they went through, marketing was also a problem.

Indeed, in the Northern Region, TV pictures regularly show warehouses of piled bags of rice, miniature versions of the “groundnut pyramids” of Kano in the 1960s before Nigeria struck oil!

A problem the Asutsuare rice farmers complained about was/is the unavailability of fertilizer. This has been a perennial problem on the news
not only for rice but also for cocoa, the mainstay of our agriculture, as well as
all crops.

Indeed, the shortage of fertiliser has been attributed to smuggling into neighbouring countries where smugglers make windfall profits from Ghana’s subsidised fertiliser.

It was, therefore, a surprise when recently, the fertiliser shortage was attributed to the Russian invasion of Ukraine. The war, which started in February 2022, was ingeniously/ disingenuously blamed a month later for Ghana’s fertiliser shortage!

Discussions by experts on radio and TV suggest that 70 per cent of Ghana’s waste is organic. The obvious question is why do we continue to import chemical fertiliser at great cost when we can produce fertiliser more cheaply from our own organic waste?

Indeed, the production of fertiliser is not rocket science! In the 1970s, fertiliser was produced at Teshie, Accra.

A road at Teshie goes by the name “Fertiliser Road” in the general area of the factory’s location.

According to a Ghana News Agency report, thousands of bags of local rice harvested during the farming year in 2021 remained in warehouses and homes of farmers. This is because with their high cost of production, Ghanaian rice farmers cannot compete with the relatively cheaper rice from Vietnam, Thailand, India and Pakistan with their economies of scale.

Meanwhile, Ghana imported $39 million worth of rice in 2020 making us the 20th largest rice importer in the world. Is it a case of “rice oligarchy” at work against local production as often alleged?

Furthermore, foreign rice has become cheaper because of the reduction in benchmark value discounts ostensibly to encourage foreign investment in Ghana. In the process, Ghanaian rice farmers are priced out as they struggle to break even.

It is mindboggling as to why Ghana continues to import large quantities of rice when local rice producers cannot find buyers for their produce.

Indeed, research has shown that rice can be grown in all 16 regions in Ghana.

In the mid-1970s, under Gen. Acheampong’s Operation Feed Yourself, Ghana was a net exporter of rice with Dawhenya rice brand as the flagship.

Like toothpicks and others, there is no excuse for Ghana importing rice when local rice is not patronised. The so-called perfumed rice imported from other countries are certainly not more nutritious than our locally produced rice I enjoy. It is the responsibility of government to think out policies which will help our agriculture to grow.

And Ghanaians, let us show patriotism by eating our own rice!

Employing human-beings as “human-scarecrows” at Asutsuare in warding off birds is an exercise in futility and an affront to our dignity as a nation in the 21st Century.

When I saw on TV an old lady with a catapult launching stones at birds for 12 hours to be paid 20 cedis, I bowed my head in shame! The English poet said “They think too little who talk too much!”

Leadership is not about talking. It is about doing! Leadership, lead! Fellow Ghanaians, wake up!