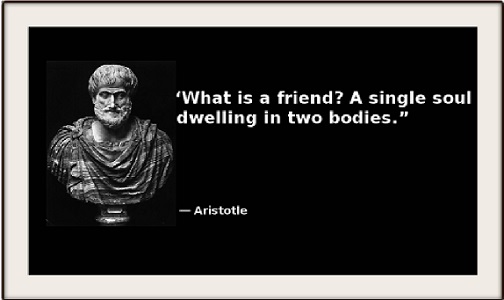 “In poverty as well as in other misfortunes, people suppose that friends are their only refuge. And friendship is a help to the young, in saving them from error, just as it is also to the old, with a view to the care they require and their diminished capacity for action stemming from their weakness; it is a help also to those in their prime in performing noble actions, for ‘two going together’ are better able to think and to act.”—Aristotle.

A few months ago, together with a group of friends, we talked about the value of friendships. Though it escalated into a two-hour argument with lots of differing views, it was a positive discussion that left me with much contemplation.

On one side of the argument, the rationalists argued that all friendships and relationships were transactional, no matter how close they became.

On the other side, the romantics explained that good friendships were much more than transactions.

The rationalists believed that we must expect something in return for everything we give. So, we become friends with parents who have their children in the same class, swim meets and parties as ours.

And we lose those friendships as soon as our kids no longer have anything in common. The reasoning is cold but logical.

The romantics believed that friendships develop because of feelings. And when they do have them, they are happy to give unconditionally and receive nothing in return.

“Why are we still friends today when our kids are no longer in the same city, let alone the same school,” one of the romantics asked the rationalists. “And what am I getting from you now apart from having to listen to your insecurities?” Everyone laughed.

I left contemplating the actual value of friendships. From numerous scientific research, we know the benefits of having deep connections.

For example, psychiatrist Robert Waldinger, the director of an 81-year-old study on adult development, states in his famous TED talk that people with healthy relationships live much happier and longer lives.

The study focuses on having fewer but deeper longstanding relationships.

The next day, I came across Aristotle’s ethical masterpiece, The Nicomachean Ethics, written almost 2000 years ago. Aristotle believed that the good life needs virtue, internal good and good friendships.

Aristotle states that there are three kinds of friendships based on a ladder from the lowest to the highest:

Here two people are not in it because they have feelings for each other. Instead, each party knows they will receive a benefit in exchange.

Usually, it ends when the benefits or situation changes, and each then moves in a different direction. That was the transactional friendship that the rationalists were putting forward.

In my business life, I’ve had many of these. For three years, I became friends with a supplier. We spoke regularly, dined and spent much time together when travelling to Europe and China. However, as our business ended, so did our friendship. Now we barely keep in touch.

Though this is more common with younger people, it can occur in other stages of our lives. Here the friendship is short-lived but emotional.

This is mainly seen during school and college, but sometimes when we have a shared interest with someone that lasts only briefly. For example, when joining a summer camp, a writing retreat or playing on the same sports team.

When I spent a few weeks in San Diego getting certified as a business coach, I spent every day together with two guys.

We laughed and had a good time during those few weeks, but the friendship faded as I got back home, and my life took over. Now we barely keep in touch and it’s mainly on social media.

This is also known as the friendship of the good. Aristotle noted that it’s the best form of friendship, as it’s based on the virtues and values we respect in each other, instead of it being only transactional or pleasurable.

Here, we like them for themselves with no thought of any benefit whatsoever. These friendships are where we find that the other pushes us to become a better version of ourselves without any envy while we do so likewise.

These are the long-lasting friendships which can only be had when each one is virtuous in the first place. But unfortunately, they are harder to find and need much time and investment to blossom.

Today, I feel I have a few true friendships. Over the years, they have helped me become better in many ways.

Through their words and actions, they always leave me thinking about how I could be a better person.

And I have done the same towards them. But significantly, we have invested time and effort for our friendship to grow.

When I think of all my friends, it’s hard not to put them in these three above buckets. However, it’s also possible to have friends from the lower utility rank to grow into true friends. Or maybe we met pleasurable ones at a writing retreat or sporting event but we then tried to deepen it, and it worked.

In a world where deep friendships are rare, and we seem to be side-tracked by social media and the shallow friends we make there, it is crucial to lament and absorb the deep wisdom of Aristotle’s definition of true friendships.

Going back to our argument that night, it’s true that we can have transactional friends, and there is some benefit to it.

But just like a Big Mac can satiate hunger for only a few hours but doesn’t leave us nutritionally complete, shallow friendships do nothing to nourish the soul.

Instead, we must seek the deep good ones that can help us grow and navigate the vicissitudes of life.