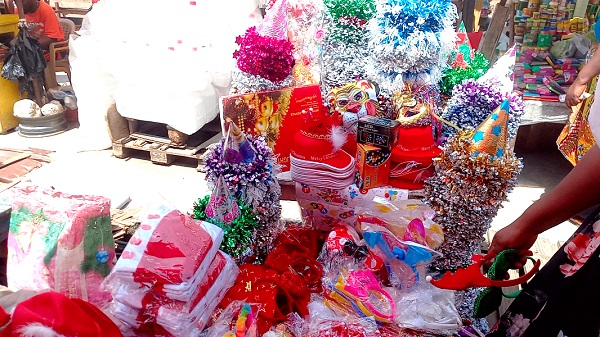 The other day when a friend exclaimed “Ei, so Christmas is in just two weeks?” during a conversation, I took it as a rhetorical question and restrained myself from reprimanding her for not knowing the obvious fact that Christmas was two weeks away. Eventually, I realised that of course she knew when Christmas was, but probably felt that the season had crept up in the shadows rather surreptitiously, only to burst upon her in an almost frightening way. I know the feeling.

Back in the day

There was a time when the very air one breathed felt ‘Christmassy’ in the few weeks up to Christmas. There was a buzz of sorts in the system, from adverts about Christmas sales and Festivals of Nine Lessons and Carols to Christmas carols blaring from shops, taxis and radio stations, among others. The shops heaved with artificial Christmas trees, tinsel and other shiny Christmas accoutrements for the home to announce the season. I am not harking back to the innocence of my childhood and youthful days in the 1970s and 1980s, but to rather contemporary times.

I accept I am possibly jaded by age, but somehow, the thrill and magic of ‘bronya’ seems to have waned over the years, even for children. I am not sure it is just about the economy, even though it cannot be discounted.

In recent times, it appears the only flicker of an upcoming Christmas is the mad shopping rush a couple of days to Christmas, together with the insane traffic, especially in the urban centres, the popping up of hampers in shops and the jump in the sale of chicken, rice and cooking oil, complete with the traditional media interviews of traders about how sales are going, with the standard answer accentuated by the obligatory sad look that “hmm, as for this year, sales are really bad. Last year was better”, as thick crowds of shoppers mill around them. Maybe the crowds come for an annual sightseeing experience.

Some media houses never fail to inform us how many children were born in selected hospitals on Christmas Eve, Christmas Day, Boxing Day, New Year’s Eve and New Year’s Day, and Christmas Day seems simply impossible without a screening of the movie ‘Home Alone’ on one of the television channels.

Then of course there is the coup de grace – the massing up of crowds in a spiritual fervour to cross/jump/sail/march over into the new year, whilst various prophecies are revealed unto us.

The world entered 2022 with the uncertainties of COVID-19 hanging over our heads, even though arguably the worst dip was effectively over. In Ghana, it was not until the end of March that the President announced the re-opening of land and sea borders and the lifting of most of the COVID-19 restrictions and life slowly returned to normal.

However, the year was to be far from smooth. On the global stage, inflation jumped up to levels hitherto unknown for decades, Russia invaded Ukraine and sparked off a major refugee crisis in Europe, with ramifications for the global economy, and the world’s population passed the eight billion mark in November.

On the home front, the Appiatse explosion near Bogoso in the Western Region rocked the nation in more ways than one, and Ghana crashed out of the AFCON 2022 and again out of the just-ended World Cup tournaments, sparking national mourning and endless post-mortems.

On the political front, the New Patriotic Party(NPP) and the National Democratic Congress(NDC) continued to square off on literally every issue known to man, including the much-vaunted and equally much-derided E-levy, with court processes to try and unseat incumbent Members of Parliament to boot. The famous ‘Kume Preko’ demonstration of 1995 attempted to reload itself this year, but could not quite summon the same verve – not even closely, and a damp squib was the result. Both major parties went to the polls to elect new party officers at different levels. A vigorous, unprecedented parliamentary attempt by the Minority to censure the Finance Minister flopped for lack of numbers, even though earlier on, some 80 Majority MPs had called for the sacking of the minister.

On the economic front, the nation turned to the International Monetary Fund(IMF) for bailout, a decision the NDC mocked to no end, for the Finance Minister had earlier declared it would not happen. In a hissy fit, the cedi decided to get stroppy and embarked on a dangerous high-wire dance. Fuel prices - and ultimately the price of everything else – jumped in solidarity with the wobbly cedi, sending our collective hearts into our mouths, seemingly with no end in sight. Thankfully, the national currency seems to be in a stable condition now. Long may it continue.

Like literally every citizen in this country, I have had my fair share of the brunt of the economic difficulties, especially in the latter part of the year. It has been really difficult, not just for me or my friends who run various businesses and have called me at various times to vent their frustrations and loss of business, especially in the wake of the currency volatility. There are others I know who have struggled – and continue to struggle – to keep body and soul together and keep a roof over their families’ heads and provide them with shelter. The struggle is real.

But in spite of the dark clouds and the stormy seas of 2022, I personally have a lot to be grateful for, particularly regarding a health scare earlier this year, but which, fortunately, did not quite turn out to be what could have been.

In so many other ways, God has been good, challenges notwithstanding. On a slightly lighter note, I remain grateful for what has been a splendid, year-long 70th anniversary celebration of Opoku Ware School, culminating in a grand durbar at the school about two weeks ago, with the President and the Asantehene in attendance. It was a lot of hard work planning the various events, and all went well.

As the year rolls to a close and a new one appears on the horizon, I believe we are all hopeful for a much better year, whether in our personal relationships, finances, businesses, professional growth or our health. Of course, it is not going to be a walk in the park, but a little prayer goes a long way.

As you celebrate the holiday season and all it stands for, may you be inspired by God’s blessings, may your paths be straightened and may you and your family enjoy a blissful 2023 and beyond.