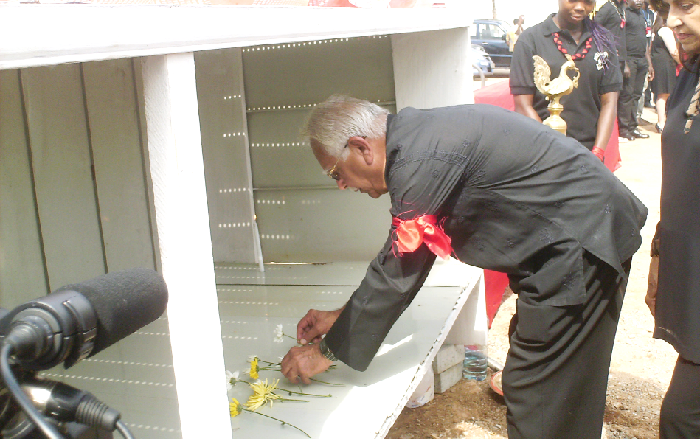 FLASHBACK: The Chairman of the Melcom Group, Mr Bhagwan Khubchandani, laying a wreath in memory of those who died in the disaster Follow @Graphicgh

There is no prize for guessing the reason why a write up on the collapse of buildings around this time may not be what people want to read.

The message risks being drowned in Trumpisms and heated political campaigns in Ghana and of course as the US also votes today. But four years ago, 14 innocent souls perished in one of the worst disasters in Ghana’s history; the collapse of the six-storey Melcom shop at Achimota in Accra.

This is one of the many disasters in Ghana that never seems to go away. But  let’s pause for a minute and say a prayer in memory of the needless loss of young men and women who went to work one morning and never returned to their families, and yet this country has shown time and again that it does not care for its citizenry. Not just the politicians, but all of us forget too quickly.

A lot has been said and written in respect of buildings that have since collapsed after this unfortunate event with varying number of deaths and injuries. Soon after the Melcom Disaster on November 7, 2012, a poorly engineered hotel under construction also collapsed at Nii Boi Town on May 13, 2014, killing four persons. The contractor blamed it on curses and dynamites.

He is walking free today. Then on July 16, 2016, our nation lost the first vice president of the Ghana Chamber of Commerce and Industry who was among the three who died in yet again another collapse of a building in Cantonments.

Since then, we have had various building failures in the heart of Accra and all high risers. Again, so many promises by our political leaders yielded nothing.

The President promised an investigation into the disaster when he visited the site of the collapsed building after taking a day off his campaign tour in November 2012. One lifeless body after another was followed by politicians who all came, promised, left and forgot. But we should not forget that:

• President John Dramani Mahama gave a strong signal that the person whose negligence caused the collapse of the multi-storey Melcom building at Achimota would be dealt with and a committee would be put together to come up with a report.

To date no report has been published and even the membership of the committee is unknown to many Ghanaians. These promises come and go and the citizens of this country are helplessly unable to hold our politicians accountable to what they tell us.

• The Chief Executive of the Accra Metropolitan Assembly (AMA), Alfred Nii Oko Vanderpuye, after the collapse of the Nii Boye Town Hotel, revealed that the prosecution of persons arrested in connection with the Melcom Disaster would commence soon.

According to him, investigations into the disaster have long been completed. To date we have not seen nor read any report on the Melcom shop collapse and, of course, nobody was prosecuted. The owner of the building, Nana Boadu Nkansah Ayeboafo, together with the then Ga West Director of Works, Arc. Carl Henry Clarke, were arrested by the Bureau of National Investigations (BNI) but were later released on bail and nothing has happened. Since then the Chief Executive has progressed to contesting to become a lawmaker in the Ablekuma South Constituency and still remains at post.

• We should not forget those 14 who perished on the day and 70 out of the 81 who were trapped but survived with various degrees of injury and psychological trauma. It will be good to find them to evaluate how their lives have been affected by the disaster. The AMA says they have improved their development control capacities but that is yet to be seen.

Most developers in such areas do not contract professionals in the building industry.  In places such as Nii Boi Town and Awoshie which have seen more than a few collapses, more developers depend on draughtsmen and informally trained tradesmen.

With the complexities as the scale of structures increase, the capacity of these key participants in construction is always found wanting and, therefore, we should expect a few more collapses unless measures are put in place to avert this and a lot of professionals share this view.

However, ever since the occurrences moved to areas such as Cantonments, Airport City and such areas, many built environment professionals have become even more worried. The poor construction culture is permeating areas where you would expect better self censoring by developers, i.e. the use of competent professionals and contractors as well as appropriate use of materials and the tests that should be undertaken technically and statutorily.

Poor materials and poor construction methods in many instances have resulted in these failures and in many of these cases, it is the Ghana Institution of Engineers (GhIE) which has privately undertaken their own investigations.

The institutions responsible for development control have shirked their responsibilities and got away with it. For all the buildings that have collapsed, no investigations have been completed and published.

The Metropolitan, Municipal and District Assemblies (MMDAs) are not growing at the same pace as the number of high risers in the country, especially in the urban areas. The building inspectors do not usually have the capacity to properly monitor a lot of these high risers springing up. But, more importantly, we have failed to prosecute those whose actions have resulted in the loss of life and property.

It is interesting how King Hammurabi wrote the laws that protected life and property thousands of years ago. During his reign he wrote several laws and the Hummarabi’s Law 229-232 was the code on Building Responsibility.

“If a builder builds a house for a man and does not make its construction firm, and the house which he has built collapses and causes the death of the owner of the house, that builder shall be put to death.

In Ghana, in contemporary times, there is absolutely no responsibility for the failure of buildings, i.e. structural or even environmental responsibility. Developers who have been negligent as in the case of the Melcom Disaster where 14 lives were lost and 70 people sustained various degrees of injury have still not been brought to justice.

It is unfortunate that in all of this, Melcom’s name has been more attached to this than the developer who failed to acquire proper documentation and also poorly constructed the building. There were counter accusations by the developer that the users inappropriately used the rented property by increasing imposed loads on the upper levels beyond the capacity of the building.

There were also reports that staff of Melcom reported to their management that there were signs of looming structural failure and this was trivialised. There were some warning signs and the system failed to pick these warnings up.

But we know that those who died did so in vain and nothing has been done to prevent another disaster.

The writer is an Architect