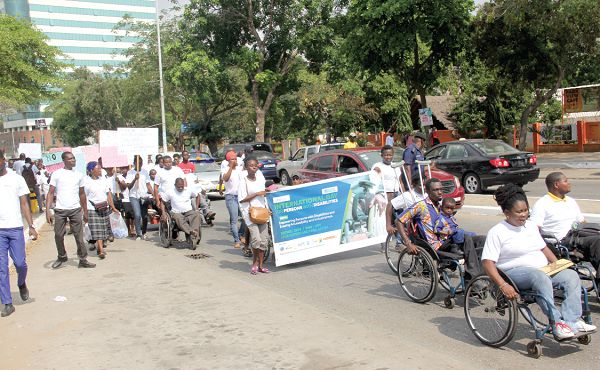 Some members of the Ghana Federation of Disability with placards during a march to mark the International Day for Persons with Disabilities. Picture: EDNA ADU-SERWAA
30.5k Shares

“We killed him” was the title of the lamentations of Michael, a friend of a disabled young man  called Kingsley Kwaku Gyeke, a.k.a., Amount, who recently committed suicide because he could no longer stand the mockery over his disability.

“Why are we like this as a society? Do we not have a place for the less privileged in our midst? We have passed disability bills and related legislation to help PWDs, but those things are just on paper.”

“We are wicked to the core to those living with disability. We make their lives miserable to the extent that they despair of life and wish themselves dead.

“Society killed my friend. Yes, we killed him. We stigmatised him. We could not help him when he needed us most. Where did our sympathy and compassion go? Shame on us.

How many Kingsley Gyekes are out there suffering silently? Rest well my friend.”

The United Nations Convention on the Rights of Persons with Disabilities (UNCRPD) defines persons with disabilities as including, “those who have long-term physical, mental, intellectual or sensory impairments, which in interaction with various barriers may hinder their full and effective participation in society on an equal basis with others.’

The World Health Organisation (WHO) estimates that about a billion people are living with a disabilities. In most countries, at least one person in every 10 is disabled by physical, mental, or sensory impairment.

In its deliberations on the human rights of individuals just after World War II, the United Nations (UN) provided an opportunity to adopt a new approach that expressly affirmed the vulnerability of groups at risk of discrimination and marginalisation.

It, therefore, accepted the use of words and phrase such as ‘everyone’, ‘no one’, ‘all persons’ to ensure the inclusion of all in the instrument. This recognises the equality of all to equal rights and protections under the law.

The Declaration affirmed the same civil and political rights enjoyed by all to PWDs, stating that they should receive equal treatment and services to enable them to develop their capabilities and skills, while speeding up the processes of their integration and reintegration.

By Resolution 31/82 of 1976, the UN General Assembly called on all to take account of the rights and principles laid down in the Declaration in developing their policies, plans and programmes.

Relatedly, the UN adopted the CRPD on December 13, 2006 to reaffirm the existing human rights of persons with disabilities as set out in the International Bill of Rights.

The 1992 Constitution, in article 29, makes provision for the protection of the rights of PWDs. In furtherance, Ghana developed a National Disability Policy in 2000 and followed it up with a Disability Law in 2006.

Ghana ratified the UN Convention on the Rights of Persons with Disabilities (UNCRPD) in 2012; all these and the establishment of the National Council on Disability (NCPD), as well as the development of a National Disability Strategy, addressing the barriers faced by PWDs and promoting social inclusion.

Regrettably in Ghana, up to 20 per cent of the population is estimated to be living with either a physical or mental disability. PWDs face severe social stigma and an entrenched culture of discrimination which manifest in inequalities in accessing employment, education, health care, transport, use of public places as well as other social amenities. They are sometimes ridiculed and called derogatory names.

Despite constitutional and legislative guarantees for the rights of PWDs, it is clear that Ghana’s disability laws are inadequate to protect the rights of PWDs and to prevent stigma and discrimination against them.

It is about time Ghana expedited action to review her disability laws in line with the (UNCRPD) to enable PWDs to realise their inherent and inalienable rights as human beings.

By the Public Education Department,
CHRAJ