Making jails places of reformation: A chat with the Acting Director-General of the Ghana Prisons Service, Isaac Kofi Egyir 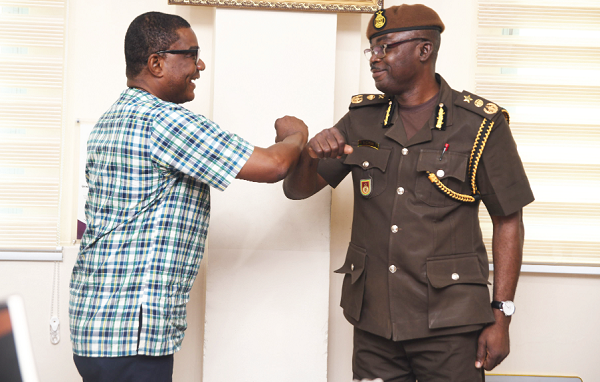 The leadership of the Ghana Prisons Service recently paid a courtesy call on the Editor of the Daily Graphic, Mr Kobby Asmah, in his office in Accra as part of efforts of the service to engage its major stakeholders to enhance its work.

The Acting Director-General of the Service, Mr Isaac Kofi Egyir, was accompanied by some management, including the Director, Operations, Mr Samuel Akolbire, and the Head of Public Relations, Chief Supt Courage Atsem.

Also at the meeting was the Foreign Editor, Ms Mary Mensah, and a Deputy News Editor of the Daily Graphic, Mr Kwame Asare Boadu.

Below are excerpts of an interview on the operations of the Ghana Prisons Service and related matters, including formal and informal education for inmates, conducted by the Daily Graphic team led by Mr Kobby Asmah at the meeting.

Kobby Asmah (KA): Your institution plays a very important role as it is charged with managing our prisons. Your constitutional mandate is such that it deserves support from all of us. I want to congratulate you for managing the Prisons Service with little complaints despite the scanty resources available to you.

Isaac Kofi Egyir (IKE): Thank you very much. I deem it very prudent to be calling on major stakeholders, of which Graphic is a major stakeholder. I want to thank Graphic for doing a yeoman's job over the years by publishing some of the good things being done by the Ghana Prisons Service, and equally the bad pointed out to us for us to straighten up.

KA: We have no doubt in our minds that there are some challenges. How have you been able to manage the Prisons Service so far?

IKE: Although we are faced with many challenges, we have been able to enrol a second batch of 58 prisoners in tertiary programmes at the College of Distance Education of the University of Cape Coast. The programme is being run in collaboration with the Plan Volta Foundation, a not-for-profit organisation.
We have also relied very much on agriculture. Together with the Church of Pentecost, we are establishing five camp prisons preoccupied with agriculture to augment what we are doing. For 10 years now daily feeding grant per inmate remains GH¢1.80 and the service relies on agriculture to supplement government efforts; but representations have been made to the government recently and it is reviewing the feeding grant.

KA: You started a programme called Efiase to solicit for funds. How far has the programme helped to improve the services of the prisons?

IKE: The programme is still in existence, just that the steam has gone down a bit. It all has to do with transition at the prisons service. We are trying to put things in place; I will look into it and come back to you with adequate information on the programme.

KA: I also remember you had schools for the inmates, many years down the line; we were often invited to participate in some of the activities. These days I'm not hearing much about it.

Mr Samuel Abban (left), Production Manager of the GCGL, briefing Mr Isaac Kofi Egyir (2nd from right), acting Director-General of the Ghana Prisons Service, and his entourage on the printing process. With them is Mr Charles Ntiamoah-Amoako (right), Director, Technical Services of GCGL

IKE: Recently, because of COVID-19, all third party engagements have been abrogated, but if there is any special reason why we should admit anybody, we have processes laid down to be followed. However, the school is still in session.
We have non-formal education, which the majority of the prisoners participate in, and with the formal education where we have the Primary, Junior and Senior High Schools as well as the University. So maybe with time, I will charge my director of operations to get your men together and do a story about it.

KA: There are challenges, no doubt but we need to hype the efforts being made by your outfit because I believe that out of that we can resonate good tidings, and people can come in and support. We all know that the prisons are overcrowded. Is it overcrowded because of poor management? No, I don't think so. The overcrowding is because of several reasons and factors and these factors must gradually be resolved.
I visited the German prisons some six years ago and it was a delight to tour the facility. Indeed, the director of prisons was seen having lunch with the inmates at the same canteen; it was unbelievable. They had television, books and then depending on one’s status, some prisoners had their own rooms.
It will be wrong to compare but that is the ideal we want to get to; it is attainable but with a little bit of effort, a little bit of innovation like you are doing with the agricultural sector, and if the private sector also comes on board, we will be able to achieve that.

IKE: I believe so too.

KA: Can you speak to the issue of inmates that go out to render some services?

IKE: Yes, we have a partnership with Zoomlion Ghana Limited for cleaning Accra. COVID-19 has stalled that programme. We still have that partnership that we are doing.

KA: Is it across the country?

IKE: Not yet, we are now replicating it in the Ashanti Region, and that is also raking in some revenue for the state, and obviously when it gets to the state, we also get our portion. We are also having discussions with the Minister of Railways Development as to how they can engage us. I am very sure that before the end of the year we may see the light at the end of the tunnel.

KA: What is the current population of the prisons?

KA: How have you managed the COVID-19 situation in the prisons so far?

IKE: Just last week I won an award for COVID-19 management in the prisons. It was a humanitarian global award. If you will remember, during the outbreak of COVID-19, we had a stakeholder discussion with the Chief Justice himself, the Attorney-General and the Inspector General of Police on how to put in place mechanisms to reduce custodial sentences and also suspend most of the court hearings with the exception of high profile cases.

We also talked about how to come under strict COVID-19 protocols, so that there will be no more than the wholesale visit. Now inmates are not receiving their relatives, we only allow their relatives to bring food and other items but we try to minimise personal contact.

With the prison officers, we do constant testing, especially those in the bigger prisons. Our medical staff are there to guide them about it. As we speak, Ghana and Algeria are the only African countries that did not record COVID-19 in their prisons.

KA: This is commendable.

IKE: Thank you. However, it doesn't mean we do not have COVID-19 inmates. We had COVID-19 inmates who were brought from outside. After they tested positive for COVID-19, we did not allow them to join the population, and if they test negative we quarantine them before we allow them into the prison population.

In fact, it was the stringent measures we put in place that resulted in us not recording a single case. Let me also add that the Ministry of Health helped a lot with the provision of personal protective equipment and the vaccination of inmates.

KA: Congratulations, you just hit the ground running. This is our first engagement. Let us engage more often, I will be knocking at your doors. I am hoping that you will also knock on our doors. Let us share your successes and also difficult moments and we believe that when we share the right information, society will come to understand why there is the need to support your outfit.

IKE: Thank you for your audience.