Bicycles parked in the heart of Copenhagen
30.5k Shares

A chain of cyclists zoomed past in a linear fashion. The old, the young, the male and the female were seen riding bicycles on dedicated lanes on either side of the road. Others walked briskly on pedestrian walkways.

And when the pedestrians’ traffic light turned green, the cyclists stopped and waited patiently. Then it switched green on the bicycle lane, and they sped off again. The traffic was free-flowing for the relatively fewer cars on the road.

This was the first scene that greeted me when I got to the Scandic Falkoner Hotel area, located at Frederiksberg, in Denmark's capital city, Copenhagen, on October 2, this year.

I was among 19 journalists selected across Africa for a DANIDA Fellowship dubbed "Reporting from the African Frontline of the Global Climate Crisis".

As a first-time visitor to Denmark, I was moved by what I saw. This was a sharp contrast to what pertains to Ghana’s capital city, Accra. In my mind’s eye, I started drawing the contrast lines.

If it were a typical day in Accra, a gridlock of vehicles running bumper to bumper, amid the tooting of deafening horns, would have been the order of the day.


Hundreds of weary-looking and frustrated members of the travelling public would have been shoving each other at parked bus stops, as they tried to outsmart each other in long queues to access commercial vehicles.

Scores of pedestrians would also be struggling to meander their way through the traffic jam in a desperate attempt to get to their destinations. The various road users would have been competing for the same road infrastructure that has no provisions for cyclists and limited options for pedestrians.

Biking is the dominant means of transport that serves the mobility needs of two-thirds of the 5.8 million Danish population, 45 per cent of which live in rural areas. The wider Copenhagen metropolitan area, which hosts about 1.8 million people, is the hub for cycling.

From Fredriksberg to the Copenhagen city centre, Nordhavn, Nørrebro, Nordvest, Sydhavnen and Teglholmen, bicycles are the main means of transportation. Kings and servants ride bicycles; chief executive officers (CEOs) and their employees ride them; students use them to school; almost everyone bikes.

There are 2.75 million households in the country, with 1.2 million being one-person households; but irrespective of the type of household, there is a bicycle. Two per cent of the Danish population employed in the agriculture sector; the 18 per cent in industry and 80 per cent in the service sectors, mostly rely on bicycles for mobility. It is common to see a child of about three years riding a bike with his or her parents riding behind to initiate the child and get him or her \ accustomed to the biking culture.

Even if you do not have your bike, there are some for rental everywhere. They are parked at vantage points. All you need is to use a mobile application that allows you to unlock the bike with a code and ride to your destination; then pay for the distance covered.

A senior Consultant and project manager at NIRAS International Development Consultancy, Dr Henrik Borgtoft Pedersen, explained that the dominant biking culture in Denmark was part of the green agenda the country was pursuing to help address the climate crisis.

He explained that because cycling had become part of the Danish society, there was a deliberate policy for all road projects to incorporate bicycle lanes into the designs.

“Mountain bikes cost about 40,000 Danish Krone (DKK); you can get a sports bike for between 15000 DKK and 25,000 DKK and you can also get a Chinese bike for about 2000 DKK; so there is a bike for everyone. People have more than one bike — each one for different purposes,” he added.

Apart from the recreational value of bicycles and the fact that they aid transportation, experts say that riding helps to keep the doctor away, as it keeps one as fit as a fiddle.

From the climate perspective, riding bicycles help to reduce global warming, since there is no emission of greenhouse gases into the atmosphere as is the case with gas-powered vehicles.

The use of bicycles also helps to decongest cities by reducing traffic, In Copenhagen, for instance, during peak periods in the morning and evenings, there is a lot of human movement which creates traffic. Going on bikes makes movement faster and reduces congestion. 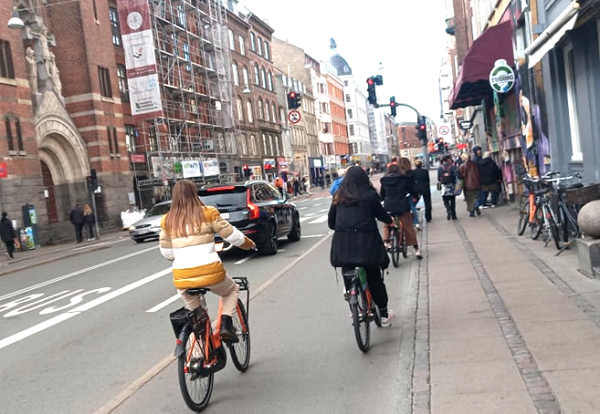 “Riding bicycles is a cheaper alternative means of transportation in the city. In Copenhagen, for each kilometre you make on a bike, the society saves $1,” Dr Henrik said.

He explained that in terms of the social benefits, biking served as a leveller for all persons in Danish society, as it removed the class system.

For the CEO of Food Nation, Lise Walbrom, riding a bicycle was the best thing that had multiple benefits.

“I am the CEO of Food Nation. My husband and I have bicycles. Biking in the city is great; it is faster; saves parking space and is climate-friendly,” she said.

To ensure the safety of bikers and other road users, there is robust cycling infrastructure in Copenhagen, made up of bikeways, signs, signals, protected intersections and safe bicycle parking spaces.

One needs to be careful because, during rush hours, the bikers go very fast. Also, if you do not know the rules, you will be in trouble.

“You have to know how to turn to the right; how to stop; give a signal; there are biking lanes so you stay on the right hand; if you are all overtaking, you do from the left-hand side,” he said.

The crux of the matter

Cycling has gained popularity in Denmark because they have well-designed road infrastructure that accommodates vehicles, bikes and pedestrians. The biking culture in Copenhagen demonstrates that Accra and other populous cities in Ghana can be decongested when systems are put in place to promote biking.

This will require deliberate government policy to invest in biking infrastructure by ensuring the re-engineering of roads in the city centre and other places where it is feasible.

Just like the Danish, there could be a deliberate policy that says “whenever we are constructing roads in cities, we must make sure that there is ample space for people on bikes.”

When infrastructure is built to allow consumers to choose between automobiles and other forms of travel, it reduces a community's automobile dependency and allows for more efficient transport choices and land usage.

Given that the world is fighting the global climate crisis, the promotion of cycling will be a good thing to do to ensure that people drive less and, therefore, emit fewer greenhouse gases.