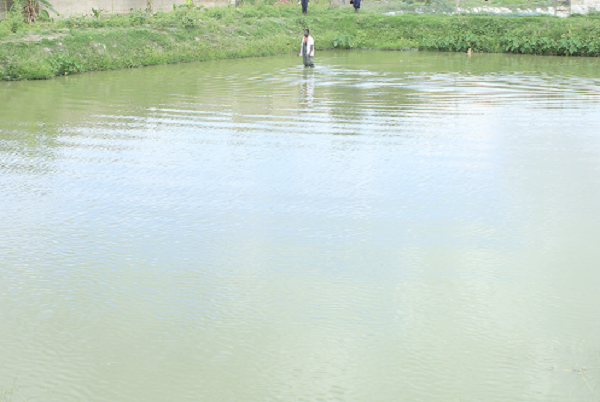 Akate Farms and Trading Company Limited, a giant in the poultry industry, has once again proven their supremacy with the introduction of a new multi-dollar automated system that houses birds and produces eggs in large quantities for commercial purposes.

The Battery Cage Electronic System, a project constructed by a Chinese company, which started last year, is now in full operation on the premises of Akate Farms . It saves time, resources and also reduces human contact with the birds and eggs.

Front view of the battery cage system that house the birds


The process of producing eggs in commercial quantities using the new technology has gradually crept into the poultry industry in Ghana though its use is exceptionally popular in developed economies. Most poultry farmers are moving away from the old deep litter system to the battery cage electronic system that produces bigger and cleaner eggs, reduces feed waste and speeds up commercial production.

This edifice has four fully automated structures housing about 151,400 birds, classified as commercial layers and an automated egg room for the collection as well as storage and distribution of eggs.

The birds accommodated in the battery cage can produce between 11,000 and 12,000 crates of eggs daily and through all these, the only work load on the attendants are to monitor and collect the eggs twice daily.

Though the deep litter system is still in full operation and also accommodates over 393,000 commercial layers and guinea fowls, that is nothing compared to the battery cage system.

This new system has contributed to the company reserving more feed for commercial purposes. Egg production has increased while bird to human contact is greatly reduced.

The eggs from battery cages are cleaner and bigger in size; and almost all the eggs produced are collected unlike the deep litter where birds normally destroy some of the eggs before collection. It is also easier to care for birds as well as manage or eliminate internal parasite problems.

Alhaji Abdul Salam Akate displaying one of his awards

The Founder and Managing Director of Akate Farms and Trading Company Limited, Alhaji Abdul Salam Akate, in a chat with the Daily Graphic observed the transformational processes of the once small business, which he attributes to hard work and determination. He also recalled how Akate farms began.

Alhaji Akate, born in the early 50s at Baweisibele a small village in the Sisala District in Upper West Region of Ghana, started the farm 28 years ago, with 1,500 birds which laid few eggs.

Alhaji, as he is called by most of his over 500 workers, dropped out of school because his father died and he had to assist his other siblings to provide the basic needs of the family through the cultivation of their own farm lands and supporting others to cultivate theirs for a fee.

As years went by, it became clear to him that life in the village would not help the family and definitely not help him to achieve his childhood dream of owning a bicycle so he abandoned the tilling of land for sustenance and moved down south.

Armed with no certificate or skill but only a machete and a hoe, the journey brought him to Bekwai in the Ashanti Region where he settled. He first tried his hands on tending other people’s farms before graduating into loading cocoa.

After several years in Bekwai, he had a stint with mining and used the proceeds to form the initial capital for animal farming, which was his passion right from his home village.

Hard work, diligence and commitment to his passion led to the establishment of Akate Farms and Trading Company Limited in 1986. Since then, Alhaji Akate has left no stone unturned in his quest to grow the company into a leading one in Ghana.

One of the core objectives of the company is to produce quality Day Old Chicks (DOCs) which will help both young and old farmers in the field of poultry production. As an individual entity, Akate Farms seeks to support the country by meeting the need for quality DOCs by farmers. It is in this regard that the company established a hatchery in 2003.

The breeding stock of every poultry industry is the bedrock of the business thriving . Akate farms has its parent stock from the best companies in the world and has also liaised with the Animal Science Department of KNUST to produce experimental parent stocks that are of remarkable performance.

The company currently houses over 110,500 parent stocks of different breeds and is expected to produce about 600,000 DOCs by January 2018.

Guinea fowls have been incorporated into the core operations of the company; and are also available in table eggs, day old chicks, dressed and roast forms.

Akate Farms was part of the selected poultry practitioners that participated in the first phase of the Ghana Poultry Project. The project, which was an intervention of the US government through USDA, ACDI, VOCA, TECHNOSERVE, was aimed at improving the quality of DOCs in Ghana. The company provided both human resource and facility; and this support system contributed to the success of the project.

The company has five commercial farms, two breeding farms, a hatchery and a modern feed mill with 14 tonnes per hour capacity.

The Outgrowers Unit of Akate Farms was established in 2014 with the aim of supporting maize farmers to cultivate more maize to support the company. This is because, the core ingredient in feed production for Akate Farms is maize. About 1,500 maize farmers are directly into the cultivation of large tracts of land to feed the feed mill. Seven thousand two hundred acres are being cultivated in Tumu in the Upper West and Ejura in the Ashanti Region. These farms alone could not satisfy the mill that produces 14 tonnes of feed per hour, and this has led to the extra demand for maize from the outside market.

In love, care, support and appreciation of the loyalty, commitment and hard work of the staff, a sickbay was established at the farm to cater for the physical well-being of the workers. The facility operates from a three-room apartment made up of a consulting room, male and female detention rooms and treats an average of seven patients per day.

The sole aim is to provide basic emergency care for the workers and their immediate families that reside in the company’s residential facilities. The facility is managed by a qualified resident doctor and two nurses. Complicated cases are referred to Manhyia Hospital for further treatment.

Though the company is based in Kumasi, Alhaji Akate, who believes in the socio-cultural, economic and religious development of communities, did not forget his roots.

Due to his personal experience, he swore to devote his life to sponsoring needy, brilliant children throughout country. Many of these beneficiaries are found in many hospitals, classrooms and other governmental agencies.

 In 2006, electric poles were donated and connected to Nwamase village in the Kwabre East District to the national grid. Bore holes to provide potable drinking water were also constructed for the community.

 In 2010, a three-classroom ICT block with computers was donated to the Nwamase Primary School

 In 2013, an Islamic Day School was constructed for Abirem community

 In 2016, the construction of a permanent clinic for the students of Ahmadyia Senior High School, Kumasi, was started and still ongoing

 He also assisted some small scale farmers with organic and inorganic fertilisers, inputs and tractors to assist them to cultivate more.

 Alhaji constructed a grand mosque on a half kilometre square land at Bugube. The mosque has quarters and can accommodate about five 5,000 worshippers.

 In 2016, a fully equipped borehole with suspended Poly Tank was constructed for the Kenyase Police Station.

 Alhaji Akate, whose local name is Bachewii, has been commended by the Sisala District Assembly for using his personal bulldozers to create feeder road networks at Baweisibelle, Kundungu and other surrounding villages.

Since inception, the company has been showered with over 30 awards in recognition of its role in the socio-economic development of the country through agriculture and some of them are:

•The mother of all these awards is the “Diamond Jubilee Business and Financial Services Excellence Award-2017” conferred on the company in recognition of its outstanding contribution through agriculture (poultry) to the economic development of Ghana during Ghana’s 60 years of independence. This award was received in humility by Alhaji Abdul Salam Akate himself and supported by his wife Hajia Mariam Akate and son Dr Abdul Samad Akate.

• 2011 – Agro-Based Company Of The Year 2011 By Chattered Institute Of Management Ghana.