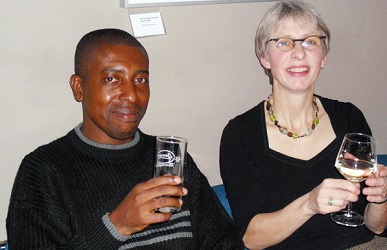 In a toast with Sabine Emmerich, Project Offi cer for the course, during the welcome dinner, at 6.26pm on November 5, 2009 Follow @Graphicgh

After that scare, the night (first night in a strange suburb – Zimmererweg and to be precise Buckower Damm) passed quickly and soon it was day.

So even though I left Ghana on a Tuesday, my first day in Germany actually began on Thursday and it was in the evening of this day that InWEnt had scheduled a welcome dinner for all participants.

After finding the weather so unfriendly the previous day and also to adjust to the different time zone, I remained indoors, sleeping all day till evening, so I will be well rested for the welcome dinner for participants of the Newspaper Management course.

When it was 5 p.m. our chaperons Susan and Antonella came to pick us to the welcome dinner at the Merhaba, which turned out to be a Turkish Restaurant.

At the restaurant, course participants introduced themselves to course staff minus the lecturers.

After the introduction and serving of drinks, the meal, a buffet, was served and my goodness it was an interesting combination. I wouldn’t dare to mention what was on the menu, for I will fail miserably.

The only familiar food was rice.

The stews were strange as well as the soup – which tasted good though. In all, we enjoyed a good meal and thank heavens it did not disturb my stomach.

After having a lot to eat and enjoying a fairly good time, majority of the participants clamoured to return to the guest house, as we were still a little tired from our long journeys from our respective countries and we were also still trying to adjust to the very cold weather (Wahala be this!).

Moreover, we had to prepare for the first day of the course, which was the next day. Friday finally arrived and we all gathered in front of the guest house at 8 a.m. We were later to be taken to the IIJ facility where the course would be held, by one of the hardworking assistants – Susan.

The Journey to IIJ

The journey to IIJ, which took approximately 40 minutes, was very intriguing as well as adventurous and I must add that it was all confusing.

First, we had to take a bus which we were all getting familiar with – M44, to HermannstraBe but the tricky part was with the trains we had to connect to school.

First, we had to board a train to Sudkreuz, then on arrival, went downstairs to board another one going in the direction of Anhalter Banhof, made sure we came off at that stop, then climbed upstairs from the tunnel to the institute.

We were not enthused at all when we were told we would have to make the trip on our own on Monday. But how for do? We decided to leave the guest house together as a group the following week, so we wouldn’t miss our way.

All was already set when we opened the door to what would be our lecture hall for two weeks. Every participant’s name tag showing also his or her country, was positioned where he or she would be sitting, plus a file, scribbling pad and a pen, which were all branded.

In all, we were supposed to be fifteen according to the placings but we were 13 on that first day. We later gathered that Joseph from Nigeria would be joining us at the weekend, while Anastella from Tanzania had cancelled her participation at the last minute due to some family problems.

Although we were told the fi rst day was just to introduce us to the course, it was a kind of baptism of fire, as we spent the whole day being introduced to one topic after the other, after all 13 participants and two lecturers - Tatiana Repkova and Peter Berger had introduced themselves.

Though it looked like a marathon session, the introduction had adequately prepared us for what lay ahead for us.

After lectures on the fi rst Friday we were taken to a historic site – a famous checkpoint at the Berlin Wall, when it was functionally known as Checkpoint Charlie.

Checkpoint Charlie, as we were told, was a very important checkpoint for the allied forces during the time Germany was partitioned into East and West.