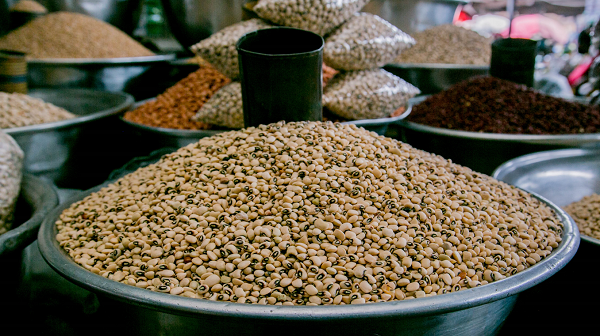 Cowpea on display at a market
30.5k Shares

About five (5) months ago, Ghana’s National Biosafety Authority (NBA), an authority under the Ministry of Environment, Science, Technology, and Innovation, published a notice inviting public comments on whether it should approve the country’s first genetically modified crop, the Pod Borer Resistant (PBR) cowpea or beans.

The gazette notification dated 18th February 2022 said the authority had received an application from some Ghana government scientists to allow for the “environmental release” of the GM cowpea. The request was from scientists working with the Savanna Agricultural Research Institute (SARI) of the Council for Scientific and Industrial Research (CSIR). The approval will eventually allow SARI to place the GM cowpea on the market for sale and consumption.

According to the application document, the PBR cowpea exhibits very high levels of resistance to the legume pod borer which is responsible for up to 80% of yield losses on farmers’ cowpea fields. The PBR cowpea expresses a well-known insect control protein derived from bacteria that is sprayed in powdered form on farms to control pests. The application document says farmers and consumers will benefit from PBR cowpea through higher yields, lower costs of inputs, greater on-farm safety because of reduced pesticide usage, and decreased pesticide residue on the beans.

The authority says it is reviewing the application together with relevant regulatory agencies and independent experts. The review seeks to ascertain if the genetically modified PBR cowpea is safe for human and animal health, as well as the environment. Once this review is completed, the authority will announce an approval or decline of the request. We are urging the authority to approve the request.

Genetically Modified Organism (GMO) is the common terminology that is used to describe seed varieties that have been created through genetic engineering procedures. It is used to describe animals as well but for the purpose of this context, we will use crops to explain what it is. For ages, plant breeders seeking to improve crops so they become resistant to stresses like drought, cross the crop with another variety that possesses the unique trait they want to transfer. This takes a long time, and the process is usually trial and error.

With GMOs, only the gene or DNA fragment responsible for the desired trait is moved into the crop of interest by scientists using laboratory techniques. Subsequent generations of the new seeds that get planted on the field inherit the newly introduced traits. In South Africa, more than 85% of all corn, and 90% of all soybeans grown and consumed are GMOs.

In the USA, more than 90% of both crops grown and consumed are GMOs. As of 2019, GMOs were grown in 29 different countries across the world. To date, there has been no evidence that the consumption of GMOs has caused any negative health effects in human or animal consumers anywhere in the world.

A defining moment for Ghana

The expected decision from Ghana’s National Biosafety Authority could go either way. Whether approval or rejection, it will be a defining moment for the GMO landscape in Ghana. Besides the GM cowpea, field trials are also ongoing to produce Ghana’s first GM rice variety.

The nitrogen- and water-use efficient and salt tolerant (NEWEST) rice, has been engineered to require less nitrogen fertilizer, tolerate drought conditions, grow in salty soils, and still give a good yield. Confined field trials of the GM rice at the Crop Research Institute of the CSIR in Kumasi have shown that, with just the nitrogen use-efficiency trait, it yields between 14 and 25% better than traditional varieties.

The future of this GM rice, other potential GM crops, and the future job prospects of the thousands of students pursuing agricultural biotechnology and related degrees at Ghana’s various universities, will most likely be defined by what happens with the GM cowpea review process that is underway. Nigeria became the first country in the world to put GM cowpea in the hands of farmers in 2020. It remains to be seen if Ghana will follow suit in 2022.

NBA should approve the GM cowpea

We are convinced that farmers who grow cowpea, and consumers generally stand to benefit a great deal if this variety gets approval. Cowpea or beans is a popular, protein-rich staple crop that is usually cooked and eaten with other carbohydrate sources. The crop is however highly vulnerable to the deadly Maruca pod borer pests, which sometimes cause farmers to lose 80 to 100% of their cowpea grains.

To control the pest, farmers typically spray their fields with pesticides between eight and 12 times in the 12-week life cycle of the crop. But the genetically modified cowpea variety, into which a gene known as the “cry1Ab gene” from a naturally occurring bacteria (Bacillus thuringiensis) has been introduced, is resistant to the pest. According to scientists at SARI, confined field trials have shown that the GM cowpea reduces the need to spray fields with chemicals from 8 to only 2, and offers up to 5 times higher yields due to the reduction in pest destruction.

This makes GM cowpea unique, as it helps to reduce the use of harmful pesticides in the environment. Its approval will also help farmers spend a lot less money on pesticides, improve the availability of beans in the country for consumers, and help the agricultural economy generally. The decision by farmers and farming communities on whether to grow these varieties will eventually be taken when the crops are available. Those who do not want it may decline to grow it. But without this requested approval by SARI, the opportunity for those who may want to use it will not even be available. That is rather unfair, discriminatory, and undemocratic. The opportunity for choice should be allowed so farmers and consumers can make their own informed decisions. After all, some of the farmers have in the past clamoured for this variety and it will only be fair for them to be given the chance to try it.

The National Biosafety Authority is expected to respond to the application by SARI for approval of the GM cowpea latest by August 2022. If the response is positive, the variety will then go through the regular approval procedures that non–GM crops go through at the Ministry of Food and Agriculture to allow for its final commercialization, so it becomes available to farmers and consumers. We are all waiting patiently to see what happens.

Authors:
Dr. John Saviour Yaw Eleblu (PhD) is a Senior Lecturer at the Biotechnology Centre at the College of Basic and Applied Sciences at the University of Ghana. He holds a PhD in Plant Biology from the Universitée Paris Sud (Paris XI), France.

Prof. Kwame Offei is Director of the Biotechnology Centre, College of Basic and Applied Sciences, University of Ghana. He holds a PhD from the Imperial College of Science and Technology, University of London, United Kingdom.

Disclaimer: The authors declare no conflict of interest situation as far as this article is concerned.