Only Lawyers will understand 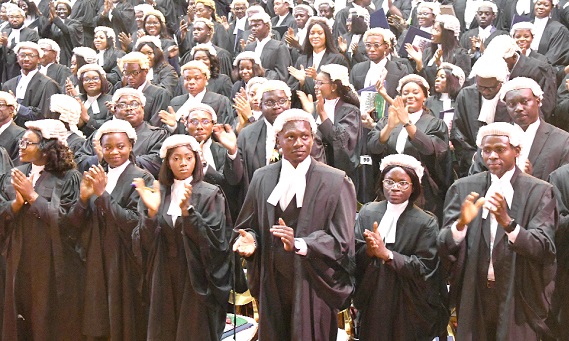 If you can afford a good lawyer secret doors open
30.5k Shares

I am not sure I can work out why law has become such a sought-after profession. Young people, old people, half of the public service, it looks like everybody wants to become a lawyer. I hope it is easier getting into heaven than trying to gain entry into Law School and I hope sincerely that once out of law school, life as a lawyer is turning out to be half as attractive as it promises.

I am coming to the conclusion that the attraction lies in people wanting to belong in this group where people speak their own special language the rest of us don’t understand, make rules (laws) that bind all of us and are the only ones that interpret the rules and having them in your corner can make the difference between retaining your liberty or going to jail.

I hesitate to quote Charles Dickens because as one of my young friends told me recently, nobody reads that kind of book these days. But I really can’t find anything from any modern writer that captures the dilemma that I face. So, with a little apology for showing my age, I go back to Charles Dickens’ Oliver Twist, where Mr Bumble, the unhappy spouse of a domineering wife, is told in court that "...the law supposes that your wife acts under your direction", and he replied: "If the law supposes that, then the law is an ass - an idiot".

Seeing as I am not knowledgeable in the law, I try very hard to be ever so careful of what I say about lawyers and the law and the legal process because I don’t really want to get on the wrong side of the law or lawyers or where they ply their trade.

But every once in a while, Mr Bumble looms large in my consideration of events and I wonder if the lawyers, the lawmakers and the interpreters of the law sometimes also feel that the law is an ass.

I am looking at this recent case involving Mr Ato Essien of the collapsed Capital Bank. Since the trial came to an end, there have been loads of discussions about the use of the relevant law in coming to a settlement that enabled him to escape going to jail on condition he pays the GH¢90 million he was charged with stealing.

For the sake of the only strangers in Jerusalem, it is probably worth recounting the broad outlines of the case brought against Mr Essien, the Founder of the Capital Bank. He was charged with stealing depositors’ funds and he came to an agreement with the Attorney General to pay the sum of GH¢90 million in restitution to the state and avoided going to jail. All perfectly legal, according to the lawyers.
Some smartaleck has put on the net, another story of two people who faced an Accra Circuit court on a charge of robbery. The two men, one a barber and the other, unemployed, were found guilty of robbing a trader of her purse, which contained a mobile phone and GH¢44.00 and each of them was sentenced to 16 years’ imprisonment with hard labour.

For those of us not learned in the law, it is easy to see the befuddlement that this situation poses. We can just about work out that there is a difference between employing force to steal the purse with the mobile phone and 44 Ghana cedis and employing your connections and expertise to steal millions. Someone has told me comparing the two cases is like comparing oranges with pawpaw. But there is this lingering feeling the bigger the amount you steal, the easier it is to avoid jail.

I certainly would want every pesewa to be retrieved from those who caused the financial crisis. If at all possible, I would want everyone who is caught stealing to be made to return whatever amount that has been stolen. But it seems it is only when you steal from the state that you can benefit from the law that allows you to escape jail and offer to make restitution and pay back the amount.

I wonder what happens to the man who enters my room surreptitiously and cuts up my mattress and steals the millions of cedis stashed in there and when he is caught, offers to return the money, buy me a new mattress and guard my house for free for the rest of his life. Is there room for such a deal to be cut and would he escape jail, seeing as he would have employed some violence to gain entry into the room and the money belongs to me and not the state?

I wouldn’t want to underestimate in any way the distress that is caused to victims of robbery and the anger and disorientation you face when you walk into your home and find it ransacked and your treasures taken away. But I wonder if someone considers the likelihood that these so-called white-collar crimes cause far more violence to the state and citizens than petty crimes and big robberies. I wonder why we think it is the white-collar crimes that deserve these special arrangements that spare the perpetrators from serving time in jail.

I have taken note of the arguments that have been put up to show that the arrangement should not be seen as Mr Essien having been given an easy option as he won’t be able to serve as a director or manage a financial institution and would have to disclose on official forms that he has a conviction. I am unimpressed. If Mr Essien thought for one moment that going to jail for one week would be a better option, I bet he would have kept the GH¢90 million and gone to jail.

Whilst I have been grappling with the issues raised by this case, my mind has gone back to something that happened in this country back in 1975 that shook the legal and court process in much the same way as this current one.

A famous Sunyani lawyer called Ohene Djan was arrested and put on trial for murder. He was a high-profile lawyer who was forever in the news and, therefore, the murder case attracted a lot of attention.

After the prosecution had finished presenting its case and lawyer Ohene Djan had been in the dock to testify on his own behalf and we were left with the delivery of the judgment, the lawyer for the accused person and the Director of Public Prosecutions spoke in that special lawyer’s language and the judge suddenly announced in the court that lawyer Ohene Djan had been found guilty of manslaughter.

I forget what else happened but I do remember that the lawyer was let go and he left town for the United Kingdom (UK).

Some said it was a plea bargain, which if it existed on the books, I had certainly never heard about it being used in Ghana.

The lesson is if you can afford a good lawyer, secret doors will open. Maybe that is why everyone wants to be a lawyer.